The 2013 NFL Draft is 48 hours away. Here's a look at the draft needs for the Miami Dolphins.

The 2013 NFL Draft kicks off on Thursday, with the Miami Dolphins holding 11 total picks, five in the first three rounds. With that kind of ammunition, the Dolphins are in a perfect position to address their needs, as well as come away with a luxury pick or two. Before we get to that point, however, we need to take a look at exactly what are Miami's needs heading into the draft. 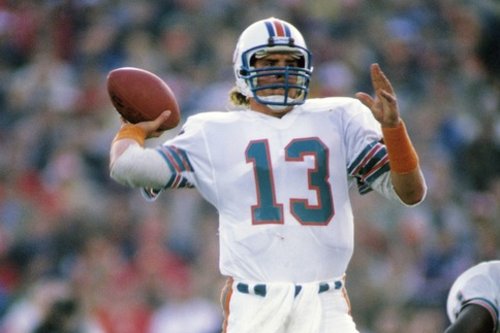 ESPN will air a look at the 1983 NFL Draft tomorrow in their 30 for 30 presentation of "Elway to Marino." Here's a preview of the show, and make sure you catch the full thing at 8pm ET on ESPN.

General Manager Jeff Ireland and Head Coach Joe Philbin clearly had a plan this offseason, addressing many of their needs and getting younger. The team had $44 million in salary cap space, and they spent the money like they had $44 million in cap space. Adding Mike Wallace, Brandon Gibson, and Dustin Keller, as well as re-signing Brian Hartline, put weapons around second year quarterback Ryan Tannehill. They added guard Lance Louis to push incumbent right guard John Jerry, as well as provide depth on the offensive line.

On defense, the team reworked the linebacker corps, adding Dannelle Ellerbe and Philip Wheeler while releasing Karlos Dansby and Kevin Burnett. When Sean Smith left the team, signing as a free agent with the Kansas City Chiefs, the Dolphins added Brent Grimes to the secondary, and re-signed safety Chris Clemons. They also added depth to the defensive line with the signing of defensive tackle Vaughn Martin to backup Pro Bowlers Paul Soliai, and the franchise tagged Randy Starks.

Suddenly, instead of needing players all over the field, the Dolphins had systematically addressed their needs and put themselves in position to succeed in the draft. Miami's remaining needs are:

Miami's one big need remaining this year is on the offensive line. With Jake Long taking his talents away from South Beach, the Dolphins have to find a way to replenish the offensive line. Currently, the plan is to put second year tackle Jonathan Martin back to his college position of left tackle, with some combination of Nate Garner, Will Yeatman, and, possibly, Jerry, filling in at right tackle. Miami could be looking for either a left or right tackle, continuing with the plan to move Martin if they land a right tackle, or keeping Martin on the right if they get a left tackle.

The team's need at tackle is so apparent, many mock drafts and experts' analysis have the Dolphins trading up in the first round to grab one of the top three offensive tackles available, Luke Joeckel, Eric Fisher, or Lane Johnson. Miami could make that move, or could look to add a tackle in the second or third rounds, given the depth of the position this year. There is a large fall off from the top three to the next group of tackles, but the Dolphins have to decide if they need an elite left tackle or if Martin can hold the left side and the team can address the right tackle position from that second group.

Despite the addition of Grimes, Miami still needs to address the cornerback position this year. The team currently has Richard Marshall, Nolan Carroll, Jimmy Wilson, R.J. Stanford, Dimitri Patterson, De'Andre Presley, and Julian Posey to team with Grimes. Marshall spent most of last season on injured reserve. Carroll is simply too inconsistent to be trusted as a regular starter, despite filling in for Marshall most of the year. The team wants to move Wilson to safety, and tried to do it last year, before having to use him as the primary nickel cornerback most of the year. Stanford, Presley, and Posey are simply young, with not a lot of experience, and, they could develop, but they are down on the depth chart for a reason.

Presley joined the Dolphins at the end of the season last year after being released by the Cleveland Browns in December. He had served as the team's nickel corner, and is under contract with the Dolphins through this season. He was claimed as Miami scrambled to replenish a cornerback corps that was dealing with multiple injuries and is owed $4.5 million this year, which could make him a cap casualty depending on how the draft happens.

Miami could be targeting several players in the first three rounds at the position. They could trade up to go after Alabama corner Dee Milliner. They could select Xavier Rhodes from FSU or Washington's Desmond Trufant at the 12 spot. Or, they could go after players like Johnthan Banks, Darius Slay, Robert Alford, or David Amerson in the second and third rounds.

The need for a defensive end may not actually be a need. The team could be looking to second year pass rushers Olivier Vernon and Derrick Shelby, as well as a toned down Jared Odrick, to up the quarterback pressure opposite Pro Bowler Cameron Wake. If the team is convinced that Odrick, Vernon, and Shelby can get the job done, then the need at defensive end could go away.

If not, or if the team simply wants to add more depth at defensive end, they could have several capable, and perhaps stellar, options in both the first and second round. It could be tempting for Miami to go best player available and grab someone who falls out of the top 11 picks, or out of the first round.

Oh look. someone leaked pics of the Dolphins' new uniform 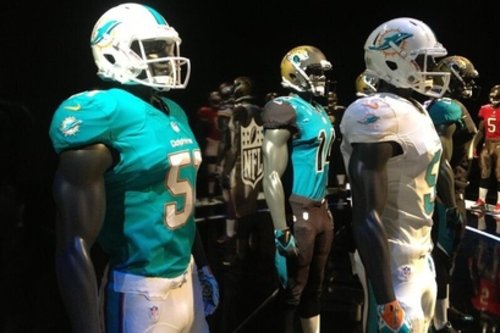 Tuesday was supposed to be the day the Jacksonville Jaguars unveiled their new uniform. Instead, the big story today was the leaked photos of the Miami Dolphins' new unis, which surfaced just minutes after the Jags' unveiled their new, garish get-ups.

This might not be the top need for Miami, but could very well be the top pick for the team. The signing of Dustin Keller added a seam threatening, pass catching tight end to Miami's roster. However, he only signed for one year. If he doesn't live up to what Miami hopes to have from him, they walk away with only the 2013 season as a casualty. But, if he does play like the Dolphins hope, he could be looking for a big contract, and could leave for some team that will pay him more.

Either way, the Dolphins could be right back needing a starting tight end next year. Most likely, sitting on the board for Miami at the 12 spot will be Notre Dame tight end Tyler Eifert. The 6'6", 250 pound tight end could be the red zone threat the Dolphins are missing right now.

The need at tight end may not be the most pressing need ever, but it is there, and the answer could be sitting there as well.

If Miami does not take Eifert in the first round, a second or third round option could be Zach Ertz, Travis Kelce, or Gavin Escobar.

Like tight end, the wide receiver position is not as much of a need as it was before free agency. With the signing of Wallace and Gibson, along with the return of Hartline and incumbent Davone Bess, any wide receiver selected is likely looking at the fifth slot on the wide receiver depth chart. That doesn't lend itself to picking a receiver early in the selection process.

Rumors have circulated that Miami could be looking to trade Bess at some point, either during the draft or during the preseason, which would free up a wide receiver on the depth chart, but could be dependent on who Miami could get in the draft.

The top target for Ireland could be West Virginia's Tavon Austin, who would add even more speed to the Miami receiver corps. However, his durability could be in question simply due to his size. However, Austin could be an asset for the Dolphins during the draft, as Miami possibly looks to trade back as the New York Jets with the 13th pick and the St. Louis Rams with the 16th selection are both thought to want Austin. If a team like the Minnesota Vikings, who could be looking to replace Percy Harvin with a player like Austin, wants to get ahead of New York or St. Louis, Miami could be the team to benefit.

In the second and third rounds, the Dolphins could look to add a receiver to develop.

I have kept running back as a need for the Dolphins all offseason, especially once Reggie Bush left via free agency to the Detroit Lions, not because Miami has to find a replacement for Bush, but because the team could be looking to upgrade second string running back Daniel Thomas, or simply looking for depth behind presumed starter Lamar Miller. Miami does have Marcus Thigpen and Jonas Gray on the depth chart as well, but Thigpen was used primarily as a returner and a reserve slot receiver last year, while Gray was on the reserve/physically unable to perform list the entire year.

Adding a power running back later in the draft could make sense. Some mocks have the Dolphins looking at Alabama running back Eddie Lacy as early as the second round, though that is probably unlikely.

One interesting possibility is for the Dolphins, with all of their extra picks, to take a flyer on South Carolina's Marcus Lattimore, who dislocated his right knee in October, damaging multiple ligaments in the joint. Lattimore has done some workouts for team scouts already, and states he will be ready for Week 1 of the NFL season. Even if he's not, the Dolphins could do the exact same thing with him they did with Gray - put him on the PUP list, letting him continue to rehab into the season without taking a slot on the 53 man roster, then deciding if he is ready, or giving him an entire medical redshirt year in 2013 before having him ready to go in 2014.