The Miami Dolphins and Kansas City Chiefs have been in discussions that could send offensive tackle Branden Albert from the Chiefs to Miami. The hangup in completing the trade, however, seems to be Albert himself.

The Miami Dolphins need to upgrade their offensive line after losing Jake Long in free agency this year. The Kansas City Chiefs, who will likely use the top overall pick in this week's NFL Draft on either Luke Joeckel or Eric Fisher, are about to have an abundance of tackles and could use a second round draft pick after trading away their own for quarterback Alex Smith. 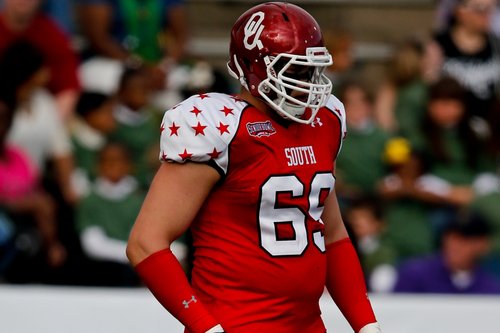 This morning, we continue our look at potential Miami Dolphins draft targets with a look at Oklahoma offensive tackle Lane Johnson. Our insider look at Johnson comes from M. Hofeld over at Crimson and Cream Machine.

Everything seems to line up that the Chiefs and Dolphins would come to an agreement that would send Branden Albert from Kansas City to Miami in exchange for one of the two second round picks Miami currently holds.

Seems simple. That is, until the Dolphins and Albert start discussing contracts. The Chiefs placed the franchise tag on Albert this year, giving him a one-year, $9.8 million, fully guaranteed contract this year. According to the collective bargaining agreement, a team has until July 15 to come to a new deal with a franchise player, and that franchise tender, and the extension deadline, would transfer if a player were to be traded. In order for the Dolphins to agree to the trade, they are going to want to bring that $9.8 million cap number down - a lot.

The Chiefs have given the Dolphins permission to speak with Albert, but those talks don't seem to be going well. According to Yahoo! Sports' Jason Cole, Albert is looking for a contract worth between $8 million - $9 million per season.

That means Albert is looking for the same deal the St. Louis Rams just gave to free agent tackle Jake Long. Long's deal with the Rams is a 4-year contract worth $34 million, or $8.5 million per season. The problem here? It's Miami that let Long leave because they weren't willing to pay him the $8.5 million per year. Why would they pay that much for Albert?

Plus give up a second round draft pick? No thanks.

Last season, the 42nd overall draft pick, which is the first of the Dolphins' second round picks this year, was given a 4-year, $4.8 million contract, an average of $1.2 million per season. That 42nd pick? Miami's offensive tackle Jonathan Martin.

Miami also holds the 54th overall pick this year. Last season, the Detroit Lions selected wide receiver Ryan Broyles with that pick, giving him a 4-year, $3.7 million contract, or an overage of $919,625 per season.

So, with either of their second round picks, the Dolphins could take a rookie tackle, hope he can develop, and pay him around $1 million per season, or they can trade away one of those picks for a tackle with a bad back, a player a team is willing to part with, for $8.5 million per season.

Otherwise, the Dolphins will resume talks with former Chiefs tackle Eric Winston or look for a tackle in the draft. They don't need Albert that badly.