With the 2013 NFL Draft drawing near, NFL Network analyst Mike Mayock during a recent conference call offered his two cents in regard to the Dolphins' first-round options, and whether the team should pursue a trade for Chiefs left tackle Branden Albert.

You know late April has arrived when Mike Mayock is giving his two cents on your team's needs and options in the upcoming NFL Draft.

How can the Miami Dolphins' draft be successful? 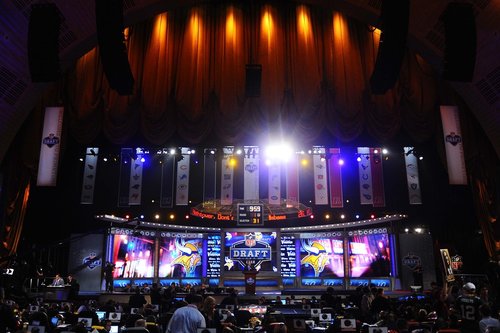 The 2013 NFL Draft is just days away now. With the Miami Dolphins holding 11 picks in the selection process, there are a lot of options for the team, but there are also a lot of positions that need attention. So, what can the Dolphins do to be successful in this draft?

Mayock during a recent conference call addressed the Miami Dolphins' top needs in this draft, whether it makes sense for the team to pursue a trade for Chiefs left tackle Branden Albert, and who the Dolphins should target with the No. 12 selection in Thursday's NFL Draft

"Miami's got a big hole at left tackle, and that's got to be a priority. If they sign Branden Albert, that's fine. But from my perspective, I like the fact that, outside of the tackle situation, you can sit back and go, 'OK, I need a corner, I need an edge-rusher, I might even look at safety,'" Mayock said during the podcast. "But as much as I like Grimes, the pickup in Atlanta, you've got to be concerned about his durability. So, I think they've got to target a corner fairly early, whether it's at 12, whether it's at 42. It could even be at 54. But they've got to get themselves a corner, from my perspective."

I like the fact that, outside of the tackle situation, you can sit back and go, 'OK, I need a corner, I need an edge-rusher, I might even look at safety.' -Mike Mayock

Couldn't agree more, but this is why so many people are pushing the idea of Miami trading down in this draft. If the Dolphins like D.J. Hayden or Desmond Trufant, it's possible they can move back as far as the No. 25 pick and still get their man. Ditto with Xavier Rhodes, although Tampa at No. 13 could take him.

How about trading up for Lane Johnson? Is that only a realistic option for those who reside in fantasy land?

"The big pressure point in the top 10 this year is the offensive tackle position, and I think you're going to see a run on tackles in general. And depending on how quickly Joeckel and Fisher go, Lane Johnson is the next big commodity. And I think there's a couple of different pressure points," Mayock said. "I think the first pressure point could be if Joeckel and Fisher are gone in the first three picks--Philadelphia is sitting at four, and Detroit desperately needs a tackle, so I think Philadelphia is the first pressure point for Lane Johnson. And then beyond that, Cleveland's sitting there in front of Arizona, depending on whether or not Johnson gets through that gauntlet. I have trouble seeing Lane Johnson getting to Arizona cleanly."

Well, that was sobering analysis. But wait, it gets better. 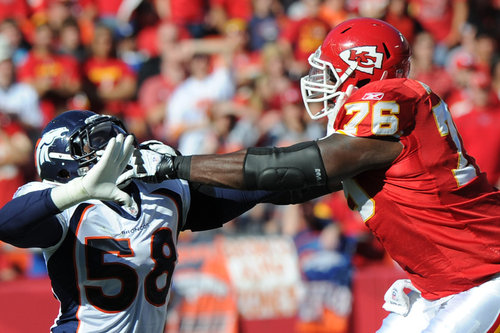 Following up on the news yesterday that the Miami Dolphins are in "serious talks" to acquire Kansas City Chiefs left tackle Branden Albert in exchange for a second-round pick, ESPN this morning reported that the Chiefs have given Albert permission to visit the Dolphins' facility.

"If you are San Diego or Miami at 11 and 12, you've got to make some decisions," Mayock said. "Do we make a trade for a Branden Albert, or do we look at a free agent to get us through the next year? Or, are we going to move up? Miami's got ammunition to move up. Or do we decide that we can wait and take D.J. Fluker at 11 or 12?"

Mayock later stated his belief that the Chargers will snare Fluker at No. 11. Yikes.

So ... does Albert make sense for the Dolphins?

"For most teams in the league, I would have reservations about (trading for Albert). I would sit there and say, 'OK, maybe I'll get through this year with a right tackle like Eric Winston, pay him a lot less money and figure it out next year," Mayock said. "For the Dolphins, who kind of went out and spent a lot of money and expect to compete this year, I think the fact that those first three tackles are pretty much going to be gone--I don't have any scenario where they get to 12; not even to 11, probably not to seven. If that's the case and you're able to sign Albert and it costs you your second second-round pick at 54, and you're willing to pay the guy, I'm in. I wouldn't say that for most teams. If you're playing poker, I think Miami's already kind of pushed the chips out there. They've signed a lot of vets and they've said, 'We're going to compete.' But you can't compete without a left tackle in this league, so Miami's one of the few teams that's got to stand up and say, 'Yeah, we've gotta go get him.'"

"I think you're looking at corners or edge guys. I think the conversation is D.J. (Hayden) from Houston. I think it's who's left of the edge guys. Milliner, the corner. Is Mingo still out there? You've gotta have that kind of conversation," Mayock said. "Even though your defense was No. 7, I think, in points allowed, they were, like, 20 or 21 in yards. Bottom line is they've gotta get better against the pass. So whether you're affecting the pass with a rush or with a corner, I think that's the next place."

You can listen to the Dolphins portion of Mayock's conference call here.