In 2012, the Miami Dolphins were the sure-bet landing place for free agent quarterback Matt Flynn. After the Dolphins "lost" Flynn to the Seattle Seahawks, the media, and fans, jumped on Miami for not landing a sure thing. A year later, Flynn has sat on a bench all year and was just traded.

Share All sharing options for: Not Dolphins Quarterback Matt Flynn Traded to Raiders

The Seattle Seahawks have traded backup quarterback Matt Flynn to the Oakland Raiders in exchange for a 2014 fifth round pick and a conditional pick in 2015. Flynn, who was the top free agent quarterback on the market last year, leaves Seattle without any real impact on the team that signed him to a three-year, $26 million contract.

Grimes: "They are building something great here" 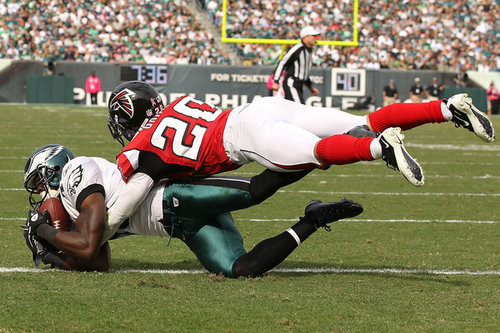 The Miami Dolphins signed free agent cornerback Brent Grimes yesterday, bringing the former Pro Bowler to a secondary in need of upgrading. After he arrived in Miami, he explained that the future of the franchise is why he wanted to come to Miami.

Last year, when Flynn hit the free agent market, everyone assumed he would wind up in Miami as head coach Joe Philbin's hand picked franchise quarterback. Philbin was the Packers offensive coordinator throughout Flynn's four years with the Green Bay Packers, and he was a sure fit in the offense that the Dolphins were going to install.

But the Dolphins "lost" him to the Seahawks.

The Dolphins were clearly "losers" in the Flynn sweepstakes, with the Seahawks stealing away a sure-fire franchise quarterback.

Now, as we progress through the 2013 free agency period, it's clear the Seahawks found their franchise quarterback - it just was not Flynn. Instead, the Seahawks handed the job to rookie Russel Wilson. Flynn sat on the bench for the year, collecting his $4 million. He appeared in three games, attempting nine passes, with five completions, for 68 yards.

The Raiders will hand the starting job to Flynn.

Meanwhile, the Dolphins have spent the offseason building weapons around their own (presumed) franchise quarterback, Ryan Tannehill.

It clearly looks like the Dolphins made the right choice last year.