ESPN's Todd McShay spoke with their network's divisional blogs this week, discussing the 2013 NFL Draft. AFC East blogger James Walker asked McShay about the Miami Dolphins moving up in the draft this year.

The Miami Dolphins have eleven draft picks in this month's NFL Draft. With that kind of ammunition, it frees up the Dolphins to do just about anything they want along the draft board on April 25. Yesterday, General Manager Jeff Ireland discussed the idea of moving up in the draft: 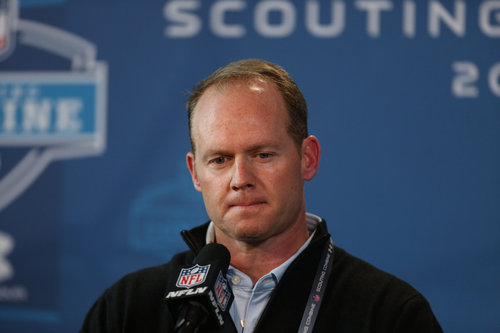 We take a break from your regularly scheduled mock draft overload to look back on previous Miami Dolphins drafts and make some predictions with 2 weeks to go till the draft.

"I've got enough ammunition to get to the first pick if I wanted to," Ireland told the medi, "but I don't see myself doing that personally. I don't know. It depends on what's there and we haven't gone through the process of (figuring that out) and talking to other teams at this point and seeing where we would go up or back. Right now, we're trying to get the board right and we're kind of grinding through the process. We're in our second week of Draft meetings. We've got about six more days left to kind of finalize the board and so, at that point, we have about a week-to-10 days to kind of work the kind of the nuances of moving up (and) moving back. So we've got a little ways to go."

Today, ESPN draft analyst Todd McShay held a conference call with the ESPN divisional bloggers. During the call, James Walker, the AFC East blogger, asked McShay if the Dolphins should move up in the draft, and what position they should address if they make that move.

"If I'm moving up, I'm moving up for a left tackle. That's just me. Cornerbacks are one of the four key positions. But left tackle is one of the two or three in terms of positional value, in my opinion. If I just invested the No. 8 pick last year in [Ryan] Tannehill and saw the promise I saw from him this past year and lose a Jake Long. ... I don't know. I would be sick to my stomach going into a season with Jonathan Martin as my left tackle if I'm trying to build around [Tannehill]. How many years have we've been looking for a quarterback for Miami? How many years? I feel like it's Groundhogs Day every single year in the draft, saying 'Well, they haven't had a quarterback since Dan Marino.' Now you've got one, so don't screw it up. To me, this is a no-brainer if you're the Dolphins. Give up the pick, move up and go get Lane Johnson, if not Eric Fisher, and lock down that spot."

Although I'm not completely sold that the Dolphins need to make this move, McShay is correct in his assessment. The Dolphins have waited a long time to replace Dan Marino, and it would be a shame to crush any development Ryan Tannehill is making by having an offensive line that blocks like Marc Colombo. I don't know if I would go so far as to say Jonathan Martin at left tackle makes me sick, but the team moving up to grab an offensive tackle would make sense.

Even if it does make Dolphins fans riot.