Miami Dolphins cornerback Sean Smith is headed for free agency starting this Tuesday, allowing him to sign with any NFL team that wants his services. During the early portion of the new "legal tampering" period, which runs from today through Monday, it appears Smith is being pursued by at least three teams.

Miami Dolphins cornerback Sean Smith has been one of the most frustrating players on the team's roster over the past few years. Smith has the size and ability to be a dominant corner in the NFL, and at times, he flashes that level of play. Then, he turns around and gets beat left, right, and center, or he drops every interception that hits him in the hands.

With his rookie contract running out this year, Smith seems destined to hit free agency next week, and likely will wind up with a new team for the 2013 NFL season. As much as the Dolphins need help at cornerback this offseason, paying Smith the $8-10 million per season he is believed to want does not make sense. Smith has never consistently played at the level that should get that dollar amount. It's not something Miami is interested in giving him. 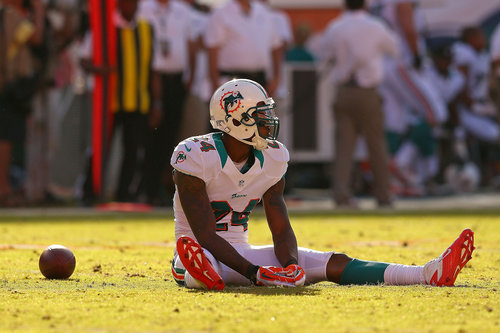 Miami Dolphins cornerback Sean Smith is slated to be a free agent in March, when the 2013 NFL league year begins. Reports yesterday said Smith is looking for a contract paying him between $8 million and $10 million per year - money the Dolphins will have no interest in giving him.

However, with the NFL's new "legal tampering" period, essentially a soft opening to free agency, where teams and agents can discuss contract terms, although no meeting or discussions with the player himself may happen, and no deal can be reached, written or otherwise, the interest in Smith seems to be growing.

The Kansas City Chiefs have been a rumored destination for Smith for a couple of weeks now, especially after former Dolphins cornerback seemed to say the Chiefs were tampering with Smith. According to the Miami Herald's Adam Beasley, between "three and five teams have expressed interest in Sean Smith since the stroke of midnight."

According to Jason Cole of Yahoo! Sports, the leading candidates for Smith appear to be the Tampa Bay Buccaneers, the Arizona Cardinals, and the New England Patriots. Cole points out that the situation is "fluid," but those are the early leaders at the moment.

Smith's upside is, obviously, his size, coming in at 6'3", 220 pounds. He does well playing against bigger, physical wide receivers, and could still develop into something special - but, entering his fifth year in the league means he either needs to take that next step now, or it may be too late for him.

His downside, meanwhile, is the inconsistency, as well as the fact that he struggles against smaller, quick wide receivers. Smith also has a belief that he is better than he is. Smith was the 74th ranked cornerback, according to Pro Football Focus, in 2012. His salary demands would land him somewhere between the 5th (Cortland Finnegan, $10M per year) and 12th (Antonio Cromartie, $8M per season) cornerbacks currently under contract. Smith does not deserve that kind of money - at least not with the play we have seen from him over the past four years.

But, it sounds like someone out there is willing to, at least consider, giving Smith the money he wants.