Share All sharing options for: Mike Tannebaum: Starks Not a Franchise Player

The Miami Dolphins placed the franchise tag on defensive tackle Randy Starks today, guaranteeing the two time Pro Bowler an $8.45 million salary for 2013. The move prevents Starks from entering the free agent mark at the end of this week, and keeps the Miami run defense, the strength of the team, together. However, not everyone seems to think tagging Starks was the right move. 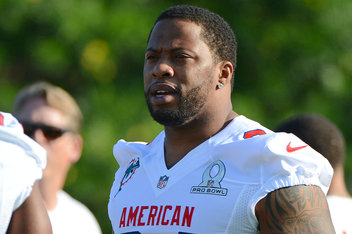 The Miami Dolphins today utilized the franchise tag, keeping Pro Bowl defensive tackle Randy Starks with the team through 2013. The tag will pay Starks $8.306 million guaranteed for the season.

Specifically, former New York Jets General Manager Mike Tannebaum. On NFL Network's NFL Total Access today, Tannenbaum told the world that tagging Starks, and giving him that much money, does not make sense. Starks, according to Tannebaum, is not a "franchise" player and is a "surprise" that the Dolphins would tag a "good football player" with no sacks on third down this year - despite the fact that Starks is a run stuffing defensive tackle, not a pass rushing defensive end.

Meanwhile, Tannenbaum is not in the league. Maybe it's because he thought Mark Sanchez was worth a 5-year, $58.25 million contract, with $20.5 million in guarantees - plus an additional $10 million in escalators - on March 9, 2012. Good thing Sanchez is a "franchise" type of player, right?

A year later, Tannenbaum is commentating on NFLN.

Game. Set. Match. Thanks for playing.