The Miami Dolphins placed the franchise tag on defensive tackle Randy Starks today. The team enetered the day with around $45 million in salary cap space before the $8.45 million to Starks. Where does that leave the team now?

The Miami Dolphins entered Monday with the third most salary cap space in the NFL, sitting on a pot of around $45 million to spend this offseason. The first major expenditure of that cash happened this morning, with defensive tackle Randy Starks receiving the franchise tag, and the $8.45 million salary that goes with it. How will that large number effect what the Dolphins do this offseason? 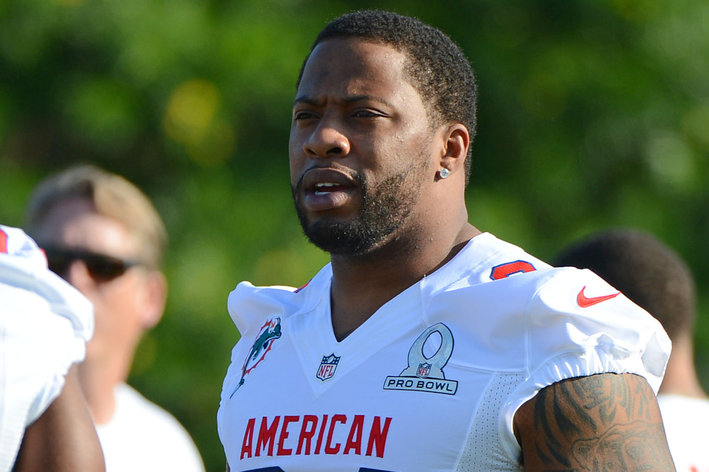 The Miami Dolphins today utilized the franchise tag, keeping Pro Bowl defensive tackle Randy Starks with the team through 2013. The tag will pay Starks $8.306 million guaranteed for the season.

The short answer is that it won’t. Even with their cap space falling to around $37 million, the Dolphins will still have the room to tender restricted free agents, re-sign any of their own players they choose, sign draft picks, and attack free agency.

But the short answer isn’t always the only answer. Tagging Starks means that the Dolphins’ top five salary cap numbers are all defensive players. Linebacker Karlos Dansby claims the top spot at $8.6 million this year. Second is Starks’ $8.45. Behind them come defensive tackle Paul Soliai ($7.9M), cornerback Richard Marshall ($5.8M), and linebacker Kevin Burnett ($5.7M), meaning the Dolphins have $36.5 million – or the same as their available cap space – tied up in just five defensive players.

The highest offensive cap number this year is guard Richie Incognito at $5.4 million, which is the sixth highest number on the team.

Having such gluttony of spending on the defensive side of the ball could make it hard for the Dolphins to continue to address any defensive needs. It could take the team out of the free agent market for a pass rusher, instead relying on the draft, and the relatively low salary cap numbers caused by the rookie wage scale, to address the need opposite Cameron Wake.

The Dolphins do, however, have to address the weaponry around second year quarterback Ryan Tannehill. The team is expected to go after one of the big name wide receivers that could be on the market. Assuming none of them receive the franchise tag from their current clubs, the Dolphins could be targeting wide receiver Dwayne Bowe, Mike Wallace, or Greg Jennings, all of whom could be looking for eight-digit salaries. Of course, the team could get creative in how they pay that salary, using bonuses to keep the per year salary cap number low, and be able to spread around the $37 million remaining this year.

Placing the franchise tag on Starks was the correct move for the Dolphins. It keeps a big part of the team’s run defense from hitting the open market, and possibly leaving the team. It does not crush the rest of the Dolphins’ offseason plans, though it does hurt them some. However, the Dolphins and Starks can continue to negotiate a long term contract, which will give the two time Pro Bowler the security he wants, while giving the Dolphins salary cap release they need. The two sides have until July 15 to come to a new deal, or else Starks will be forced, by NFL rules, to play under the terms of the franchise tender – assuming he signs it.