The NFL's franchise tag deadline is later this afternoon. By 4pm ET today, all 32 NFL teams, including the Miami Dolphins, will have made a decision on using the tag this year or not.

The 2013 NFL franchise tag deadline is this afternoon at 4pm ET. Every NFL team has the option to franchise tag one player per season, preventing them from hitting the free agent market. The team then pays the franchise tagged player a salary equal to the average of the top five players at his position.

Over the weekend, NFL.com listed the official franchise tag numbers for 2013. They are: 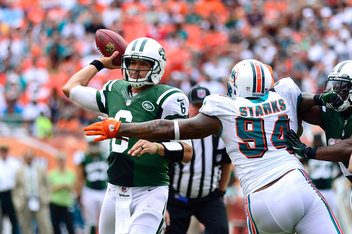 The Miami Dolphins have until 4pm ET Monday to decide to use the franchise tag. Apparently, defensive tackle Randy Starks sees the writing on the wall saying that tag could be headed his way.

Over the weekend, five teams utilized the franchise tag. The tagged players are Buffalo Bills safety Jarius Byrd, Chicago Bears defensive tackle Henry Melton, Cincinnati Bengals defensive end Michael Johnson, Denver Broncos left tackle Ryan Clady, and Indianapolis Colts punter Pat McAfee. Once a player is tagged, he and the team can negotiate a long term deal up until July 15. After that, the player will either have to either play under his franchise tender, or not play at all.

For the Miami Dolphins, several players could be franchised today, including the most likely candidate, defensive tackle Randy Starks. The team also has running back Reggie Bush, cornerback Sean Smith, wide receiver Brian Hartline, and offensive tackle Jake Long as possible targets for the tag.

The Dolphins have only used the tag once under General Manager Jeff Ireland. In 2011, the team placed the tag on defensive tackle Paul Soliai. After paying him a little over $12 million for the season, the two sides eventually reached an agreement on a two year deal through this upcoming season.

Will the Dolphins use the tag in exactly the same way this year, tagging the two time Pro Bowl defensive tackle Starks? We will all know by 4pm ET today.