The NFL deadline to apply the franchise tag is less than 24 hours from now. According to reports, the Tennessee Titans are expected to place the tag on tight end Jared Cook tomorrow. While tagging Cook takes a tight end off the free agency table for the Miami Dolphins, it may be the fight that is looming over the tag that's even more interesting.

The Tennessee Titans plan to place the franchise tag on tight end Jared Cook, according to Terry McCormick of TitanInsider.com. While Cook being taken out of the free agency pool at a position the Miami Dolphins could be targeting is bad news for Miami, it's the fight that is being lined up against Cook's tag that is more interesting.

Franchise Tag Deadline Mon.; Will Dolphins Use It? 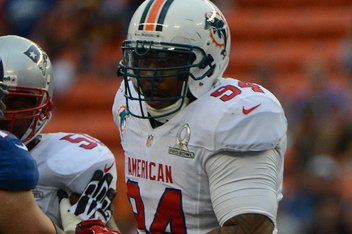 Cook is listed as a tight end for the Titans. However, he has lined up as a slot receiver more than half of his played snaps. According to the Article 10, Section 2, a player given a tag shall be given the tender "at which the Franchise Player participated in the most plays during the prior League Year." Cook, and the NFL Players Association, are set to fight the tag as a tight end, arguing that, lining up in the slot makes Cook a wide receiver.

The NFL is shifting. Tight ends now line up spread off the line of scrimmage more. They line up as wide receivers. Does that mean they are not really tight ends any more?

In 2009, the Green Bay Packers and Jermichael Finley started this fight. The Packers tagged Finley as a tight end. Finley argued he was more of a wide receiver, and the case advanced. However, before a ruling could be made, Finley agreed to a new contract with the Packers and the complaint was dropped.

Four years later, we are back to the same argument. And, it's an argument worth making for Cook. Franchise tags for wide receivers pay around $10.5 million for the season. For tight ends, the number is just over $6 million. That's a $4.5 million difference in Cook's case.

At some point, someone will have to decide if lining up in the slot is a part of the tight end position, or if that means a tight end is really a wide receiver. Cook's complaint could do just that.