Starting in 1998, the Fusion of Major League Soccer called the Miami area home. After the league contracted in 2001, the state of Florida was left without an MLS franchise. Rumors are now circulating that Miami could be back on the MLS radar if the Sun Life Stadium upgrade is completed.

Share All sharing options for: MLS Coming to Miami? Sun Life Upgrade Could Make it Happen

Miami Dolphins owner Stephen Ross is attempting to add a series of upgrades to Sun Life Stadium, including a canopy over the seating area, moving the seats closer to the playing field, and upgrading the lights and video boards. All of these upgrades were designed to keep the stadium in competition for future Super Bowls and NCAA Football National Championship games. Now, it appears Major League Soccer could be eyeing the upgrades as well.

Sports Illustrated writer and Fox Sports television analyst Grant Wahl is reporting that MLS commissioner Don Garber is pushing hard to get an expansion team into Miami, with Ross as the owner. Sun Life Stadium would serve as the home for the new Miami franchise.

Dolphins Looking to Set Referendum Date, County Not Sure 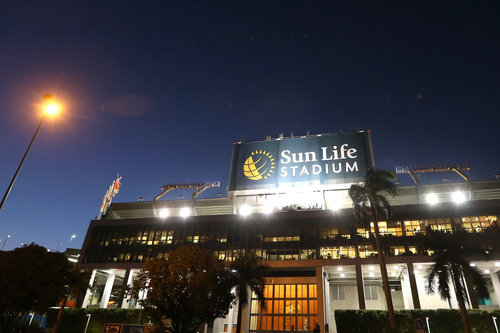 The Miami Dolphins are looking to conduct major renovations to Sun Life Stadium in hopes of landing Super Bowl L, the 50th anniversary of the NFL's Championship game, in 2016. The team has asked for $199 million in public funding, and want to have a decision before the NFL owners meet in May.

Miami had an MLS franchise from 1998 to 2001. The Miami Fusion played at Lockhart Stadium, making it to three conference semifinals in their four years of existence. After the 2001 season, MLS contracted and the Fusion ceased to exist. The league also contracted the other Florida franchise, the Tampa Bay Mutiny, in the same move.

Now, MLS is looking to come back to South Florida. However, the return of MLS to Miami could be contingent on the upgrades to Sun Life Stadium being approved and completed. Ross is pledging to pay for "more than half" of the estimated $400 million upgrades, but is asking for about $199 million in public funding.

According to Wahl, Garber met on Friday with representatives of Ross, discussing the idea of returning MLS to Florida. Ross is reportedly "interested" in the idea, despite previously having been against the idea of owning a franchise in the soccer league.

Major League Soccer is also exploring the idea of a franchise in Orlando.

Adding an MLS franchise into Sun Life Stadium could be another selling point for the Dolphins in trying to get the public funding approved for the stadium renovations, pointing to the added revenue to the city that an MLS frachise could bring. The Dolphins are hoping to have all the funding in place prior to the May 22 NFL Owners' Meeting, when Super Bowls L and LI (2016 and 2017) will be awarded. The Dolphins are pushing to host the 50th anniversary Super Bowl in February 2016.