The Miami Dolphins have until 4pm ET Monday to decide to use the franchise tag. Apparently, defensive tackle Randy Starks sees the writing on the wall saying that tag could be headed his way.

The Miami Dolphins still have their 2013 franchise tag in their pocket, able to use it as a negotiating chip with their potential free agents. However, they have to decide to use the tag by 4pm ET on Monday. Will they use it? And, on whom?

Apparently, Pro Bowl defensive tackle Randy Starks sees the Dolphins targeting him with the tag. Starting early this morning, Starks has been tweeting about wanting to come back to Miami. There's a definite franchise tag overtone to the comments:

I want to be here and finish here!

NFL Franchise Tag Deadline Monday; Will Dolphins Use It? 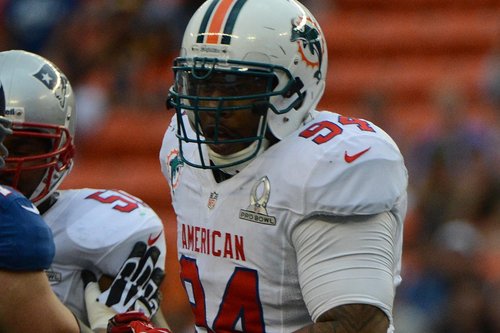 The Dolphins could also use the tag on cornerback Sean Smith, running back Reggie Bush, tackle Jake Long, tight end Anthony Fasano, wide receiver Brian Hartline, or any number of other potential free agents. However, Starks makes the most sense financially (the tag number of $8.3 million would be around his average salary in a new contract). Keeping Starks on the defensive line also keeps an impressive run defense together, with Starks next to Paul Soliai.

The Dolphins, under General Manager Jeff Ireland, have only used the franchise tag one time, on Soliai in 2011. Starks could be the second one. We will know by 4pm ET tomorrow.