Former soccer player Lauren Silberman is set to go where no woman has gone before - an NFL scouting combine tryout. Silberman will be on the field at MetLife Stadium in New Jersey today, hoping to impress scouts enough to invite her to the Super Regional in Dallas next month.

NFL history will be made today, despite it not even being football season. In New Jersey today, the first woman to try out for the NFL through the Regional Combines will be on the field at the home of the New York Giants and Jets, MetLife Stadium. Lauren Silberman is set to kick her way into NFL history.

Will Silberman make it all the way to the NFL? Most likely not. However, there is precedent for Regional Combine players making it to the league, particularly for a kicker. The St. Louis Rams drafted Greg Zuerlein last year in the sixth round after he impressed at a regional combine. If Silberman is able to impress scouts enough today, she could receive an invite to the NFL Super Regional Combine in Dallas in April.

"I am working hard to prepare but I am also realistic about my chances," she wrote in an email to the Associated Press. "I hope my willingness to put myself out there inspires others to seize opportunities and challenges. The support from around the world has been so heartening."

Silberman's stated goal is to start making 60-yard field goals. She's also realistic that she most likely won't be in the league this fall. However, with a Master's Degree from MIT already in her pocket, the former soccer player, has a great attitude about the process. 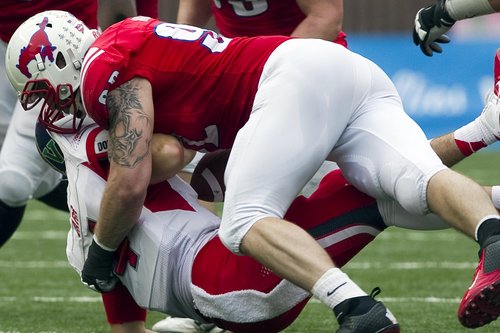 SMU defensive end Margus Hunt came to the United States from Estonia in an effort to continue his track and field career. He was a junior champ in the shot put and discuss, but ended up playing football at SMU - a sport he didn't know. So, he started playing Madden.

"I realize I may not make a team this year," Silberman said on NFL Network's NFL AM recently. "For me, I'm expecting to have fun, meet really interesting people, and, hopefully, perfect my technique from the other tremendous kickers who will be in attendance. And, regardless of the outcome of the tryout, I really hope there's a way that I can contribute and strengthen the league one day."

Asked about how she could help the league, Silberman responded that her academic pursuits focused on video games helping physical skills and how players can learn a sport through a video game.