The Miami Dolphins hold the twelfth pick in next month's NFL Draft. With the Dolphins moves in free agency so far have left them with a big hole at the cornerback position. To get a better idea of who could be Miami's target with their first round pick, I turned to Mocking the Draft's Dan Kadar for a breakdown.

The Miami Dolphins still have needs along the offensive line, at defensive end, and at cornerback, while holding the twelfth overall pick in the NFL's Draft in late April. With the elite defensive ends and tackles likely off the board when Miami makes their selection, cornerback could be the pick. But which cornerback?

Alabama's Dee Milliner will likely be off the board before Miami's pick, which means the Dolphins will be choosing from Washington's Desmond Trufant and Florida State's Xavier Rhodes. To get a better idea of the two prospects, I asked Dan Kadar from SB Nation's Mocking the Draft if he could compare and contrast the two. He responded:

"If the Dolphins stick with the 12th pick, we have them looking either for a cornerback or a tight end like Tyler Eifert.

"Trufant and Rhodes are both very good players, but for different reasons. Trufant was a guy who flashed early in his career at Washington. In 2010 and 2011, he looked like a certain first-round pick. Then in 2012, when Washington wasn't as good, Trufant wasn't in quite as big of a spotlight. It also didn't help that he wasn't thrown at as much last season. Washington could run man and zone coverage partly because Trufant was so talented. He has a lot of experience and should be able to step into a starting lineup straight away. His instincts are impressive and he can consistently make a play on the ball. His biggest weakness is Rhodes' greatest strength, and that is pure size. Trufant is a lean player throughout his frame and can struggle with tackles at times. 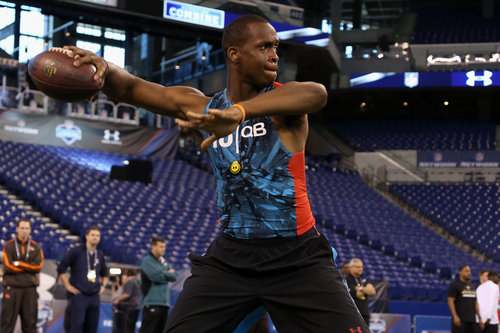 Usually, I don't post mock drafts, but I wanted to get in on the fun. Here's my first NFL Mock Draft of the year.

"Rhodes is opposite of a finesse player - which is a good classification for Trufant. Rhodes is a physical cornerback. He can jam and overpower receivers at the line, as long as they don't beat him with a quick move. Rhodes' physical play doesn't stop at the line of scrimmage. He likes to grind receivers through their routes and initiate contact when the ball is in the air. He can close on the ball in a hurry and is a solid tackler. Because he was a wide receiver in high school, Rhodes is still learning the nuances of the position. He bites on fakes and double moves. He's also not quite as fast as Trufant.

"Of the two, Trufant is more pro ready. Rhodes is the bigger player with a higher ceiling."

Which one of the two cornerbacks would you pick? Vote in the poll below and discuss in the comments.

And, of course, a big thanks to Kadar for sharing his thoughts on Trufant and Rhodes.