Free agent offensive tackle Jake Long was in St. Louis the last three days, completing a physical, having dinner with team officials, and touring the city. As he and his wife leave town, there's no deal in place for the 2008 first overall draft pick.

Share All sharing options for: Jake Long leaves St. Louis with no deal

Former, and possibly future, Miami Dolphins offensive tackle Jake Long has left St. Louis with no contract in place. Long spent the last three days with the Rams organization, taking the longest physical ever, then meeting with team officials, having meals, and touring the city. Now according to a St. Louis Post-Dispatch report, Long is leaving without a deal. 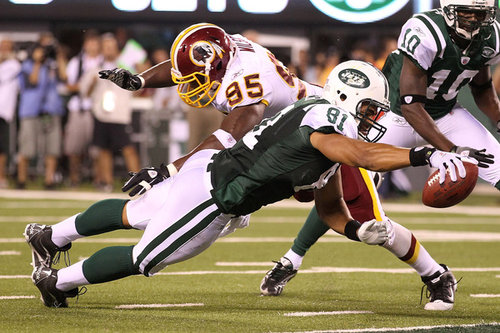 Long was drafted by the Dolphins with the first overall pick in 2008. Since then, Long has been named to the Pro Bowl four times and has been named a First Team All Pro selection. The problem is, Long has suffered back, knee, shoulder, biceps, and triceps injuries over the past few years, and his play has suffered because of it.

That drop off in play, and landing on injured reserve each of the last two season, kept the Dolphins from offering Long the contract he wants, one that pays him like an elite left tackle. Testing the free agent market, Long seems to be discovering that there aren't a lot of teams lining up to give him a contract in excess of $11 million per year.

The Rams and Long were thought to be close on a deal earlier this week, but nothing ever materialized. Nothing says the two sides can't come together still, but leaving St. Louis is not a good sign.

The Dolphins did allow tight end Dustin Keller to leave Miami yesterday before agreeing to terms with him this morning.

While fans and media have clamored to find any information on what Long could be deciding, it's been Long's wife, Jackie, who has been the best source:

Great dinner last night. Hoping to get everything figured out soon. No matter what happens we feel so fortunate. twitter.com/jackielong_17/…

I know you guys want answers right now, we do too!It's all going to work out for the best and we'll let you know when we know!

@cellycellishere me too!Believe me, if I had an answer you guys would know.

As the Longs head out of St. Louis, and likely back to their home in Miami, the Dolphins are still very much in the chase for Long. Earlier today, the team is said to have made a strong push for Long, and are hoping to have the former Michigan Wolverine return to the Dolphins.

Miami is said to be interested in Eric Winston, and will likely sign him if they aren't able to keep Long.