Free agency starts in just a few hours. Before we get there, here's a look back at some of the worst free agent signings in team history.

Free agency's grand opening is just a few hours away, finally. Before we get there, we are going to take a look back at some of the best and worst free agency signings by the Dolphins. Of course, we start with the bad news. Here are the five worst free agent signings in team history:

5. Marc Colombo (2011: 1-year, $2 million - Jeff Ireland, Tony Sparano): Signing Colombo to a one year, $2 million salary wasn't bad. The risk to life and limb that Colombo brought with him to the Dolphins was. It soon became clear why the Dallas Cowboys had allowed Colombo to leave town and head to Miami - his age and injuries had clearly taken their toll and Colombo was ineffective. Sparano started Colombo for all 16 game in 2011, despite Pro Football Focus ranking Colombo as the 67th tackle in the league, out of 76. Luckily, the one year deal finally expired and Colombo went back to Dallas to retire.

Mike Wallace to the Dolphins "A done deal"? 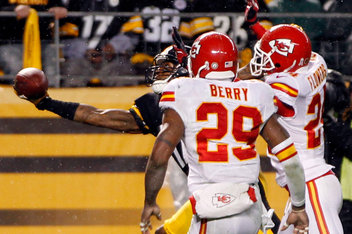 4. Ernest Wilford (2008: 4-year, $13 million - Bill Parcells, Jeff Ireland, Tony Sparano): Wilford was signed to be a pass catching threat for the Dolphins, busting up the seam and giving the Dolphins an explosive offensive weapon. He was given $6 million guaranteed to be that weapon for Miami. A year later, he was cut after putting together a massive 3 reception, 25 yard season in seven games. For those of you playing at home, that's $2 million per catch, or $240,000 per yard, or $857,142.86 a game.

3. Joey Porter (2007: 5-year, $32 million - Randy Mueller, Cam Cameron): Porter came to Miami a three time Pro Bowler, with one First Team All Pro selection. He had 60 sacks in eight seasons with the Steelers, 58 in seven if you don't count his two sack rookie campaign. He played well with the Dolphins, especially in his 17.5 sack second season in Miami, but he seemed to constantly be either in legal trouble, talking too much, or simply getting suspended by the team. After three seasons, the Dolphins, and their fans, happily watched as Porter talked his way out of town and on to the Arizona Cardinals, where his issues continued.

2. Gibril Wilson (2009: 5-year, $27.5 million - Bill Parcells, Jeff Ireland, Tony Sparano): Gibril Wilson was so dominating in his one season with the Dolphins, that he earned the name "Gerbil" from us at the Phinsider. It was miserable. This is what Matty wrote back in January 2010, just after the 2009 season ended:

Maybe it's not Gibril's fault. Maybe this regime just made a terrible decision to sign him and play him at free safety, pairing him with Yeremiah Bell. Regardless, though, Wilson was the worst player on the field for the Dolphins in 2009, in my opinion. He was terrible in coverage and wasn't much better with his tackling - missing a number of critical tackles.

Wilson signed a 5 year, $27.5 million deal. Of that, $8 million was guaranteed. But the Dolphins have already paid out the guaranteed portion - with $5 million being a signing bonus, $2 million being a first-year signing bonus, and another million in 2009 as salary with a workout bonus. With no salary cap in place and no ramifications of having to spread out the hit of the guaranteed money over the next two years, the Dolphins can save the $3.9 million he's due in 2010 as well as $15 million he's due between 2011 and 2013.

If no new C.B.A. is reached and 2010 is uncapped, then it's almost a certainty that Wilson will be gone. And not a moment too soon, if you ask me.

1. Jake Grove (2009: 4-year, $29 million - Bill Parcells, Jeff Ireland, Tony Sparano): This one is so bad, it shows up in all time NFL worst free agent signings lists. That's not good. Grove had spent most of the past five years with the Oakland Raiders fighting injuries. So, what did the Dolphins do? They gave him a 4-year, $29 million contract, with $14.5 million guaranteed. Signed to be the Dolphins' long term answer at center, replacing Samson Satele, who the Dolphins traded to the Raiders, Grove once again suffered through an injury plagued season, starting 10 games and appearing in 12. In the 2010 training camp, Colombo was once again injured, and the Dolphins finally cut him.

So, most of these are recent signings, because, well, we all remember the more recent ones. What other bad signings were there? Which move do you still hate? Let us know in the comments below.