The Miami Dolphins are looking to upgrade their offensive weapons this offseason. While the primary focus among fans has been on wide receivers, the tight end position is also in need of an upgrade, and the team seems to realize it. The Sun-Sentinel last night reported the team is pursuing Jared Cook.

The Miami Dolphins need to add weaponry around second year quarterback Ryan Tannehill. Over he past month, the primary focus of Dolphins rumors, among fans and the media, has been on getting a top of the line wide receiver like Mike Wallace or Greg Jennings in free agency. Another area the Dolphins can upgrade this year, and an area that's becoming a priority around the NFL, is the tight end position. 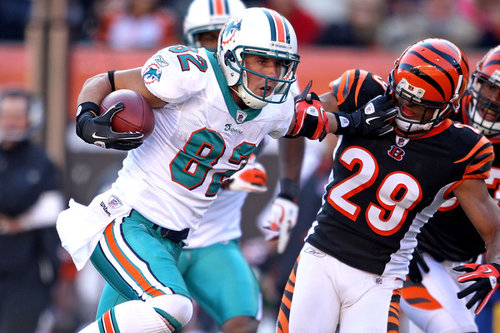 The Dolphins recognize that opportunity, and are looking to do something about it, according to the South Florida Sun-Sentinel's Omar Kelly. Kelly writes that a source confirms the Dolphins have Tennessee Titans tight end Jared Cook high on their "list of possible 'tier one' free-agent targets."

According to Kelly, the Dolphins have been in talks with several of the top level tight ends' representatives during the NFL's new 72-hour negotiating period. Included in that group, along with Cook, could be players like the New York Giants' Martellus Bennett, Oakland Raiders' Brandon Myers, or San Francisco 49ers' Delanie Walker. Any of those players could be one of the missing pieces for the Dolphins, and would be worth pursuing.

The expected price for the top tight ends this year is thought to be somewhere in excess of the $6 million per season mark. The Dolphins currently have around $30 million remaining under the salary cap, That's enough money for the team to add a tight end, a wide receiver (or two), and still have some room remaining.