NFL Franchise Tag Deadline Monday; Will Dolphins Use It?

Share All sharing options for: NFL Franchise Tag Deadline Monday; Will Dolphins Use It?

The NFL Franchise Tag deadline for the 2013 season is March 4, which works out to be this Monday. Coming into today, no teams had used the tag to prevent one of their players from hitting free agency. That changed today as three teams used the tag, while many more are expected to utilize it over the weekend. Will the Miami Dolphins be among that group?

One franchise tag per team per year can be used to prevent a team from losing one potential free agent. The tag provides the player with one year of fully guaranteed salary equal to the average of the top five players' salaries at his position. The team gets to keep a player they don't want to lose, and has a chance to continue negotiations with the player for a long term deal.

As for the Dolphins, several candidates for the tag exist. The team could use it on left tackle Jake Long, keeping their 2008 number one overall draft pick. However, he would cost over $15 million, or one third of the Dolphins' available cap space. 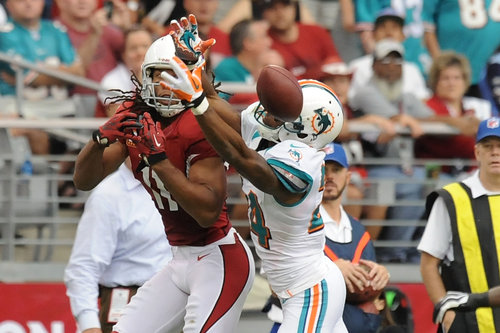 Here are the standard franchise tag numbers for this year (players with the franchise tag will make this amount, fully guaranteed for this season, unless 120% of their previous season's salary is higher).

The team could also look to use it on wide receiver Brian Hartline, who had his first career 1,000 yard season last year. The move would cost the Dolphins, however, taking Hartline from the $1.4 million salary cap number he had last season to a $10.357 million number in 2013. With the Dolphins looking to add wide receiver help this offseason, spending that much on Hartline would not make much sense.

The two players who make the most sense as targets of the franchise tag this year are cornerback Sean Smith and defensive tackle Randy Starks. Smith's franchise number would be $10.668 million this year. While it's a little higher than Smith should be paid, keeping the 2009 second round pick would be beneficial to Miami who need cornerback help with Smith. Losing him would make the hole bigger for the Dolphins.

The two players who make the most sense as targets of the franchise tag this year are cornerback Sean Smith and defensive tackle Randy Starks.

Starks, meanwhile, made the Pro Bowl for the second time last year, and is a key member of the Dolphins' run defense. He would cost $8.306 million to tag, and the Dolphins could follow the same pattern they used with defensive tackle Paul Soliai. The team franchise tagged him for the 2011 season, then signed him to a long term contract in 2012.

The Dolphins could also look to franchise other players, such as tight end Anthony Fasano or running back Reggie Bush, but Smith and Starks appear the most likely to receive the tag. The team has until Monday to decide.