Jeff Ireland: The Keyholder to the Miami Dolphins Franchise

This can be a statement season for the Miami Dolphins... but ultimately it all rests on one man's shoulders.

Share All sharing options for: Jeff Ireland: The Keyholder to the Miami Dolphins Franchise

The next few weeks are arguably some of the most exciting in football. It's a time where every team is tied at 0-0, and looking to shape up their rosters to be the NFL's next best franchise. Some teams are at the bottom, looking up, while others are resting at the top, and trying to keep their momentum rolling into the next season.

But most of these teams lay smack dab in the middle... teams on the outside looking in, and desperately wanting to eat at the big kids table. One of these teams, the Miami Dolphins, is poised to make this a big jump next season.

The Dolphins are third in cap space (only behind Cincinnati and Cleveland) with around $47 million dollars to spend. They also have third most picks in the upcoming NFL Draft, trailing only Seattle and San Francisco. The Dolphins will be looking to bring in impact players while also possibly tying up some of their big name unrestricted free agents: Jake Long, Reggie Bush, Sean Smith, Randy Starks and Brian Hartline.

Every day a new rumor will start up and fans like you and I will put on our imaginary GM caps and predict the "perfect offseason", down to the 7th round draft pick and the dollar amount given to new free agents that are brought in. As fun as this tradition is, and despite the fact that it will probably go on EVERY offseason until the end of time, there seems to be one simple problem.... none of us are GM.

In fact, the honor of transforming the Dolphins franchise to elite, or burning it to the ground completely, ultimately rests on one man: GM Jeff Ireland, perhaps the most polarizing figure in South Florida sports. 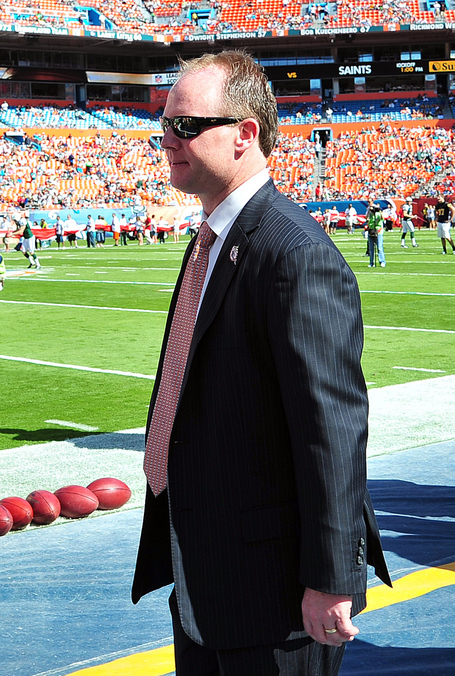 Of course, Ireland will have his own entourage. Owner Stephen Ross will ultimately have some say on how this money is spent, and head coach Joe Philbin will have a large part in bringing in the names to best fit his system. Ireland additionally brought 55 coaches and scouts with him to last week's NFL combine to help digest all of the talent.

This season, however, seems to have that "make it or break it" feel- regarding our entire front office.

The Dolphins FINALLY have a prospering potential "franchise quarterback", plenty of money to spend and a handful of draft picks to find the next young studs to carry this team forward. It's an optimistic time here in Miami, but many Dolphins fans are hesitant to get too excited about the "possibility" of greatness, to best protect themselves from a chance of failure. This post is NOT a recap of events from Ireland's tenure in Miami, but rather a simple question... do you trust him?

Personally, I don't really have reason to be too skeptical of anything Ireland has done (I think he gets a lot of bad rap unfairly), but I also firmly believe that trust must be earned, and Ireland has to put all the fire behind him and do his best work in the following weeks. Regardless of your opinion on the GM, this season will seal his fate either way; he could end up a legend -OR- he will be long gone, way before the angry mob has a chance to gather their signs and head to Dolphins training camp to riot.

But I'd like to hear your opinion... sound off below and vote if you can see yourselves go forward and put your trust in Jeff Ireland this offseason. Or perhaps you just don't have that "warm and fuzzy" feeling that he will be able to break the streak of mediocrity in Miami. I'll post an update to this after free agency and the draft, and we will see if anything has changed. One thing is for sure, we all better strap in tight because the next few months should be a wild ride.