Keep up with all of our Miami Dolphins coverage

TwitterFollow on Twitter
FacebookLike on Facebook
checkCreate your free Phinsider account and join the discussion
The AFC schedule is complete for Week 14 is complete, with two NFC teams scheduled for Sunday night football and another two NFC teams on Monday Night Football this week. How did a crazy, snow filled Sunday impact the playoff picture? We take a look.
By Kevin Nogle@KevinNogle Dec 8, 2013, 9:54pm EST
/ new 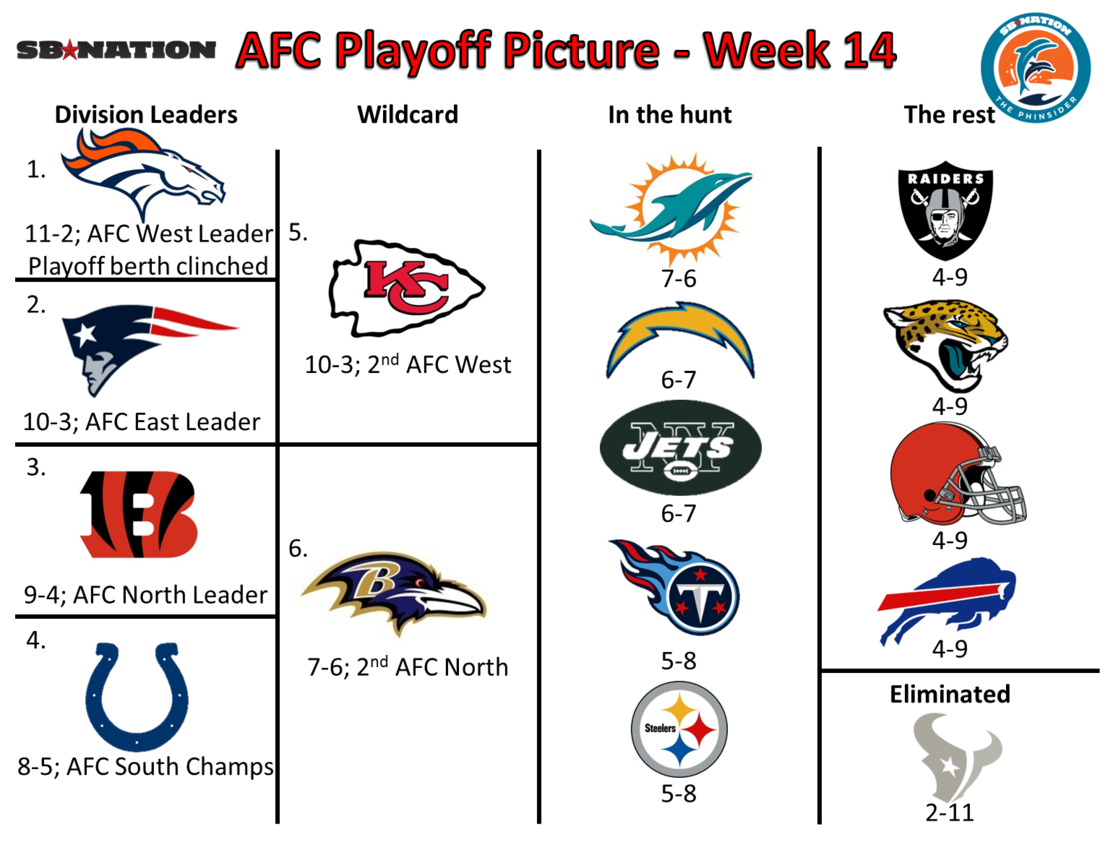 The NFL's Week 14 schedule feature four NFL teams in the final two games of the week, with the Carolina Panthers and New Orleans Saints in tonight's Sunday Night Football game and the Dallas Cowboys and Chicago Bears taking the Monday Night Football stage.  That means, the AFC has already completed their slate of games for this week, and we can see the post-Week 14 playoff picture.

Sitting on top of the conference are the Denver Broncos, having claimed the spot in Week 11 with their win over the Kansas City Chiefs, and not appearing to have any plans to relinquish it.  The Broncos win over the Tennessee Titans today clinched a playoff berth for the Mile High franchise, though, with the Chiefs just a game back, they still have work to do to win the AFC West.

The AFC East leading New England Patriots escaped a game against the Cleveland Browns today, thanks to a late penalty that set up a game winning touchdown. The 27-26 win keeps the Patriots in control of the AFC East, even as they appear to lose tight end Rob Gronkowski to a serious knee injury, believed to be a torn ACL.

The AFC North leading Cincinnati Bengals beat the Indianapolis Colts 42-28 on Sunday, moving ahead of the Colts in the playoff standings and into the third seed.  The loss from Indy also, briefly, prevented them from clinching the AFC South title, until the Broncos beat the Titans, giving the division championship to the Colts despite the loss and slip into the fourth seed.

The Chiefs, with their 10-3 record, currently hold the fifth seed, while the Baltimore Ravens, who survived against the Minnesota Vikings today, are holding on to the sixth seed with a 7-6 record.

The first team on the outside looking in are the Miami Dolphins, who remain tied with the Ravens, but lose out on the head-to-head tie breaker.  The Dolphins nearly had a great day, coming away with a 34-28 win over the Pittsburgh Steelers, and seeing the Patriots and Ravens lose, only to see those other two games turn around just before the end of their respective 60-minutes.

Behind the Dolphins, the San Diego Chargers and New York Jets are one game behind with 6-7 records.  The Tennessee Titans and Steelers both fall back to 5-8 with losses on the day.  And the Oakland Raiders, Jacksonville Jaguars, Cleveland Browns, and Buffalo Bills are all 4-9.

Finally, the Houston Texans are 2-11 and eliminated from the playoffs in 2013, just a year after winning the AFC South and being considered a possible Super Bowl contender.

For the Dolphins, they begin a swing through the AFC East next Sunday, with their three remaining games all completing the New England, Buffalo, and Jets home-and-home series.  Miami will look to continue to win, now having won their last two and three of the last four, as they look to keep pace with the Ravens for the final AFC playoff spot.