Dolphins vs Steelers: Five Questions with Behind the Steel Curtain

The Miami Dolphins are on the road for the second straight weekend, this time heading to Pennsylvania to face the Pittsburgh Steelers. To bet a better look at the Steelers, we turn to Behind the Steel Curtain's Neal Coolong.

Share All sharing options for: Dolphins vs Steelers: Five Questions with Behind the Steel Curtain

The Miami Dolphins have struggled over the years whenever they face the Pittsburgh Steelers, especially recently, with the AFC North team winning the last five meetings, and eight of the last ten. Can Miami break that streak this year, and keep themselves in the playoff chase? To get a better look at what Miami has to do to make that happen, I turned to Behind the Steel Curtain's Neal Coolong.

Kevin Nogle (KN): How much of a distraction has the whole Mike Tomlin-on-the-field/$100,000 fine been? How did the fan base react to the play, and then the punishment?

Neal Coolong (NC): It's one of those things that's highly distracting for the fans, but outside of having to deal with pointless questions, it doesn't seem like it would have any impact on the players. If any team understands the fines process in the NFL, it's Pittsburgh, and they've dealt with dozens of them since the NFL decided to focus on safety in 2010 after ignoring it for seven decades.

For all things Steelers, check out Behind the Steel Curtain.

The fan base's reaction, I think, was similar to everyone else's. In our instant replay, flash-judgement society, everyone has seen the replay a thousand times, and everyone becomes a forensic psychologist, pinpointing exactly what Tomlin was doing what he was doing. There are several back-and-forths burning as I write this.

Interestingly, I've received more email on this topic than any other over the years, and the bulk have been from fans of other teams saying the whole thing is being blown out of proportion. I think the majority feels the fine was a fair amount, and no further punishment is warranted - and just my opinion, anyone who legitimately feels the forfeiture of a draft pick for Tomlin's actions is fair either hates the Steelers, hates Tomlin or both.

KN: Pittsburgh had a miserable start to the season, but has turned it around and is trying to refine their season into a playoff berth. What has been the catalyst for the turn around?

NC: To be blunt, they flat-out sucked in their first four games. Then they stopped sucking, for the most part.

It's been a combination of adequate to outstanding pass protection, and the re-discovery of defensive splash plays. Between that, we've seen a passing offense begin to establish itself as one of the better ones in the game. Before that, though, you were seeing a team with sieve-like protection of its quarterback and a defensive force roughly as powerful as a toilet brush.

The argument can be made the losing streak to start the year was the result of none of the aforementioned things happening (five sacks, no takeaways in four losses, followed by 13 sacks and nine takeaways in a 3-1 clip from Weeks 9-12). I think it was more of a regression to the mean rather than players suddenly getting better. Injuries hit this team really hard right away. Veteran linebacker Larry Foote was lost in Week 1, putting a rookie sixth-round pick in his spot - this is a defense that barely ever plays rookies, let alone starts them at the defensive signal-calling spot, let alone rookies taken in the sixth-round.

Outside linebacker Jason Worilds has gone on a tear since LaMarr Woodley has been injured, the replacement of rookie safety Shamarko Thomas with Will Allen has also provided something of a boost. Defensive end Cameron Heyward took the starting job away from Ziggy Hood in Week 6 and hasn't looked back.

KN: It's not every day that the Dolphins face a team that actually runs the ball less effectively than they do. Yet, this week, the Dolphins, who are currently 25th in the league at 88.7 rushing yards per game, will face a Steelers team that is ranked 31st with 76.8 rushing yards per game. Why can't the Steelers run the ball, or do they just not try? On a side note, after that violent hit on Thanksgiving, it's good to see Le'Veon Bell is okay, though it is a surprise he is already back practicing.

NC: The only thing rarer would be the Steelers playing a team that actually runs the ball worse than they do.

And if you thought it was bad before...do you know who Cody Wallace is? No? He's the Steelers starting center this week. Lots of guys wait until they're 29 years old to make their first NFL start. Dr. Wallace has waited a long time for this, and it only took seven seasons and two significant injuries.

They haven't been able to run because the group, collectively, hasn't blocked well. That's blunt, I know, but there really isn't a better explanation. They don't have a mauling kind of linemen, yet, they run a lot of power. While Le'Veon Bell has played well, he's still a rookie, and he didn't play for the first three games, and probably didn't look healthy until Week 7. It's been a collective failure in multiple areas, and even considering the weather, it's legitimately not a bad strategy right now to just play 11 personnel the entire game against Miami, and throw 50 times

5 Questions with The Phinsider 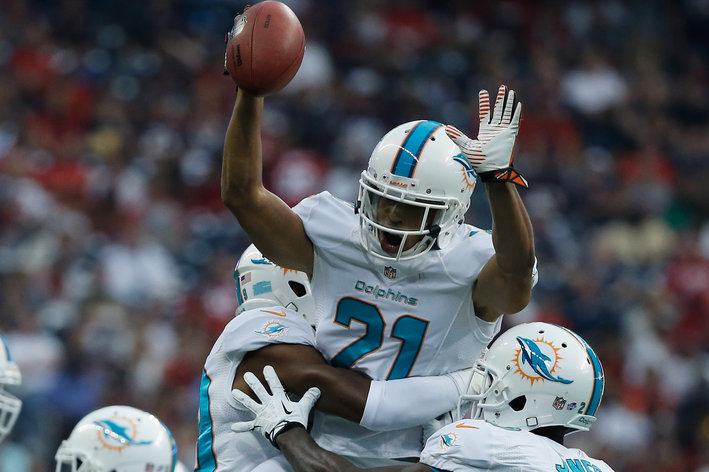 Behind the Steel Curtain's five questions with the Phinsider

KN: Ryan Tannehill has been sacked a league high 45-times this year, but Ben Roethlisberger is not that far behind, going down 36 times. For Tannehill, the problems are a mixture of an under-performing offensive line (which has looked better in recent weeks), Tannehill trying to wait his receivers open rather than using his legs to get out of trouble (again, starting to look better in recent weeks), and missed assignements from running backs in blitz pick up. What's the cause of the sack problems in Pittsburgh, and should the Dolphins be able to find pass rush success this week?

NC: The Steelers have given up a lot of sacks, but few, if any, have protected their quarterback better than Pittsburgh has over the last three weeks. They gave up one sack to Detroit, and shut out both Cleveland and Baltimore - two of the most productive pass rushing teams in the NFL.

The early season struggles were due more to a lack of continuity on the offensive line (which, ironically, is par for the course in Pittsburgh), and a quarterback who didn't appear to trust his teammates. The Steelers started performing well, particularly in their no huddle offense, and that was due to protection being provided as well as Ben Roethlisberger releasing the ball much more quickly. He looks more comfortable than he did at the start of the year, and he's playing at a fairly high level now.

At the same time, though, it's impossible to ignore that three-game period of time is also, not coincidentally, the longest stretch of offensive line consistency (in terms of health) the team has seen since a four-game winning streak in 2012. Also not coincidentally, that streak last season saw the Steelers produce at a high level.

Since that run of health is now buried somewhere under Fernando Velasco's IR paperwork, I would expect Miami to get after the passer - probably the team's most impressive attribute.

KN: When Roethlisberger is able to deliever the ball, he's been able to thrown for 281 yards per game, or 3,375 yards on the year, the sixth most in the NFL so far. Of course, Roethlisberger's favorite target is Antonio Brown, who has 1,103 receiving yards already, fifth in the league. The passing offense as a whole is eighth ranked in the NFL, while the Dolphins have worked their way up to ninth pass defense this season. How can Miami slow down the aerial attack from the Steelers?

It's interesting the way you worded this. Remove "Miami" and "Steelers" and add "anyone" and "any team."

The Steelers are operating with a much stronger sense of rhythm and fluidity in their passing game. When teams can get in sync like that, the current rules in the NFL make it borderline impossible to stop. I don't mean all teams can put up 50-plus points a game, I just mean, top to bottom, this is a completions league. There aren't "shut down corners," and the vast majority of the time, if a team is patient, they are able to complete 11 seven-yard passes down the field, resulting in a score of some type.

Simply put, today's passing game competes against itself more than its opponents, if you remove the pass rush element.

Using yards seems less of a differential measurement than it used to be in terms of passing game success. Without whipping out the ol' calculator and fake statistician hat, one constant here is scoring points. The Steelers do not score points at an impressive level - or at least, they haven't throughout the season. Issues scoring touchdowns in the red zone has been a significant problem (47 percent, which is near the bottom of the NFL). Some of that can be attributed to a downtrodden running game, but they did score three times in the red zone agianst Baltimore in Week 13, and over the last three games, sit at 55 percent, which is about average in the league.

If you want to beat a passing game, put the quarterback on the ground. That used to be simply a part of the game, before lawyers became a requirement for day-to-day operation of the NFL. It's still true, bearing the risk of drive-extending 15-yard penalties, but my guess for this game, in a snowy, offensive-challenging environment, whichever team hits the opposing quarterback more often will win.

We can discuss the fines that will invariably come after the game later.

Thank you to Coolong for taking the time to give us a little insight into the Steelers. Kickoff for Sunday's game is at 1pm ET on CBS.