With the Miami Dolphins' 2013 season complete after a disappointing loss yesterday, we can, unfortunately, start to look toward the 2014 season. The loss put the Dolphins in the third position in the AFC East, and solidified their 2014 opponents. Today, we look at the distances Miami will be traveling next season. 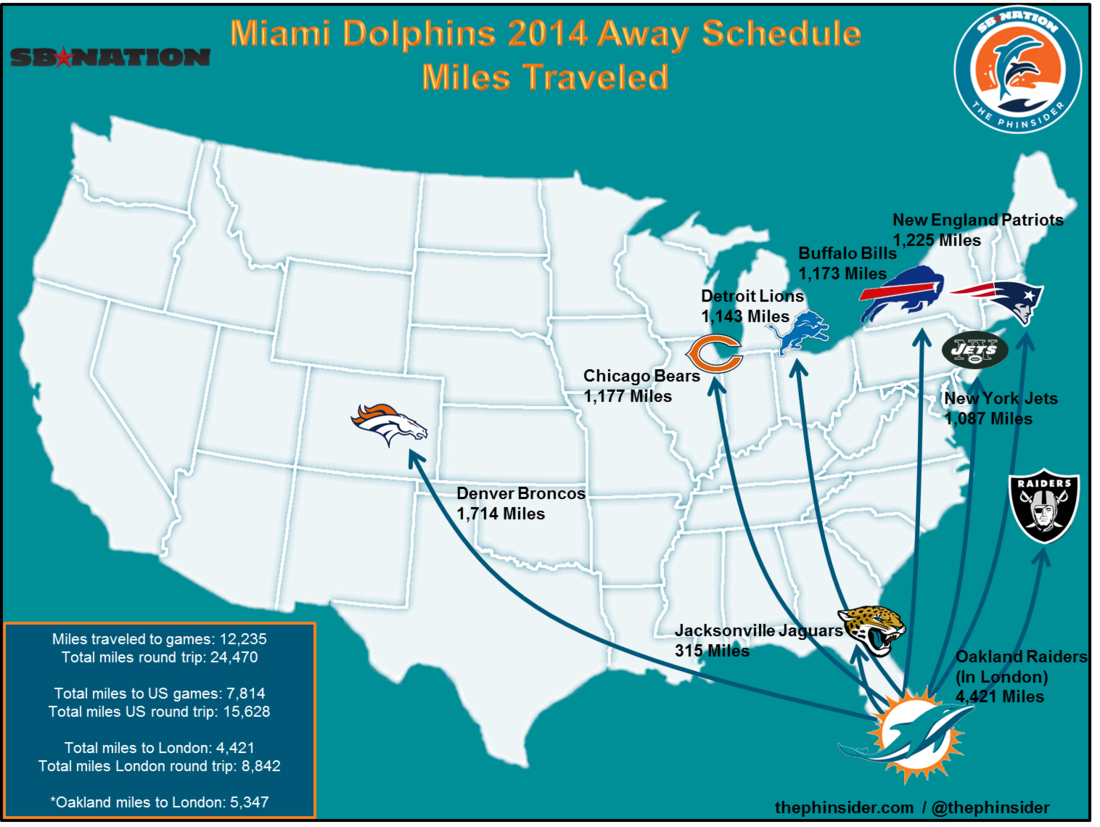 The Miami Dolphins lost their way out of the playoff yesterday, dropping the second half of the home-and-home series with the New York Jets 20-7. The loss also pushed Miami from second in the AFC East to third, falling behind the Jets.

The Miami Dolphins entered today needing a win and help to make the playoffs. They got the help, but couldn't do anything about the winning part. Instead, they dropped their second straight game to end the season, this time to the New York Jets.

The Miami Dolphins lost to the New York Jets today, dropping them from second in the AFC East to third. With the loss, their 2014 slate of opponents is now locked in.

As for the away teams, we have broken down the games by distance the Dolphins will have to travel for the game:

In total, the Dolphins will travel 12,235 miles to play their 2014 schedule, or 24, 470 miles round trip. Taking out the Raiders game in London, Miami will travel 7,814 miles within the United States to their remaining seven contests, or 15,628 miles round trip. Miami's average distance traveled to each game is 1,529 miles, including London, or 1,116 miles in the U.S.

If the Dolphins had to go to Oakland, rather than London this year, that trip is 2,574 miles, one way, meaning the Dolphins are traveling 1,847 miles more by playing the Raiders in London. However, it's a 5,347 mile trip for the Raiders to play a "home" game in London this year. The game will be played in the 1pm ET time slot, so for Miami, despite it being 6pm in London, will be playing at their normal time, while it will be 10am for the Raiders, coming all the way from the Pacific time zone.

The opening weekend of the NFL's 2014 season will be centered around Sunday, September 7. The London game for the Dolphins and Raiders will be during Week 4, on September 28.

Miami Dolphins 2014 schedule: Everything you need to know