Jets vs Dolphins: A look back at Miami's Week 13 win over New York

The Miami Dolphins beat the New York Jets in Week 13 of this season, coming away with a 23-3 victory in MetLife Stadium. As the two teams prepare to face each other in the NFL's regular season finale weekend, we take a look back at that game four weeks ago

Share All sharing options for: Jets vs Dolphins: A look back at Miami's Week 13 win over New York

To get ready for today's game, we take a look back at that game:

After watching the offense drive the length of the field (73-yards in 15-plays), but miss a 41-yard field goal, the Dolphins defense came out looking to get the ball back for the offense. On the first play for Geno Smith and the Jets, Miami defensive end Olivier Vernon reached Smith and pulled him down for an eight-yard sack. On second down, Smith completed a pass for six yards to Jeff Cumberland, and then missed on a third down pass, and New York would be forced to punt after the three-and-out. 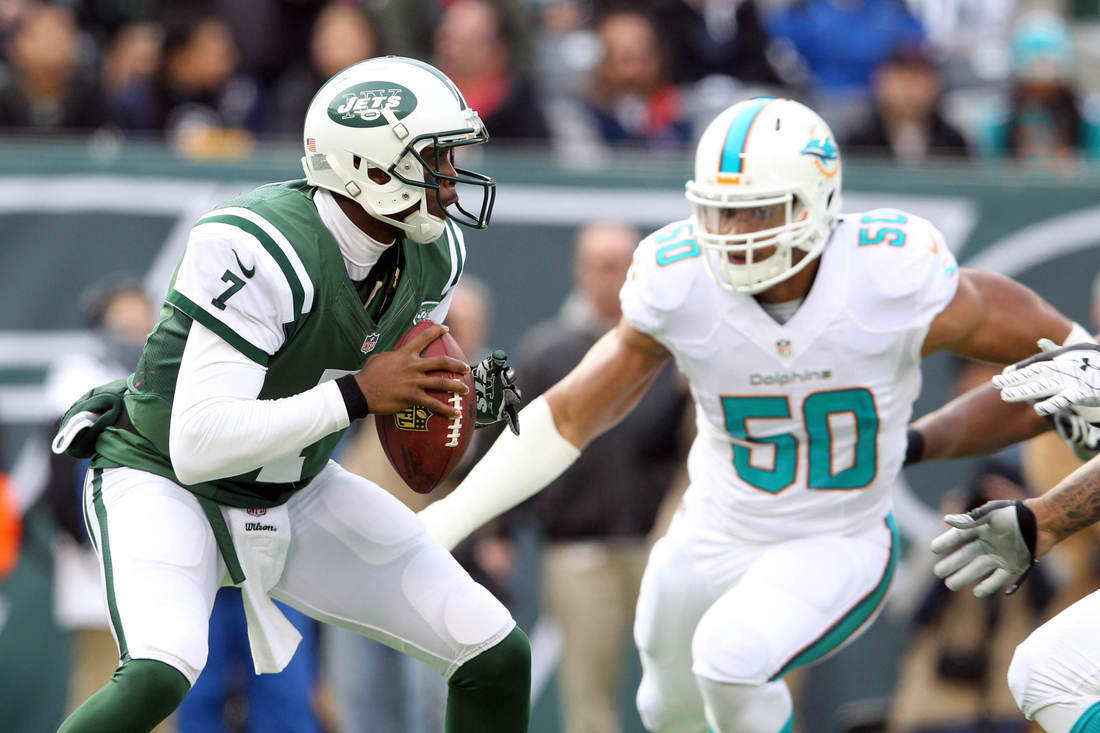 That Cumberland completion would be one of just four Smith would have on the day, accounting for 21-percent of his passing yardage. The rookie would leave the game, being pulled for second-year player Matt Simms at halftime, with a 4-for-10, 29-yard, 1-interception performance. He had an 8.3 passer rating on the day.

Miami would turn the ball over on downs during the next drive, having moved 25-yards on seven-plays before a Ryan Tannehill incomplete pass to Brian Hartline on fourth-and-one handed the ball back to the Jets. 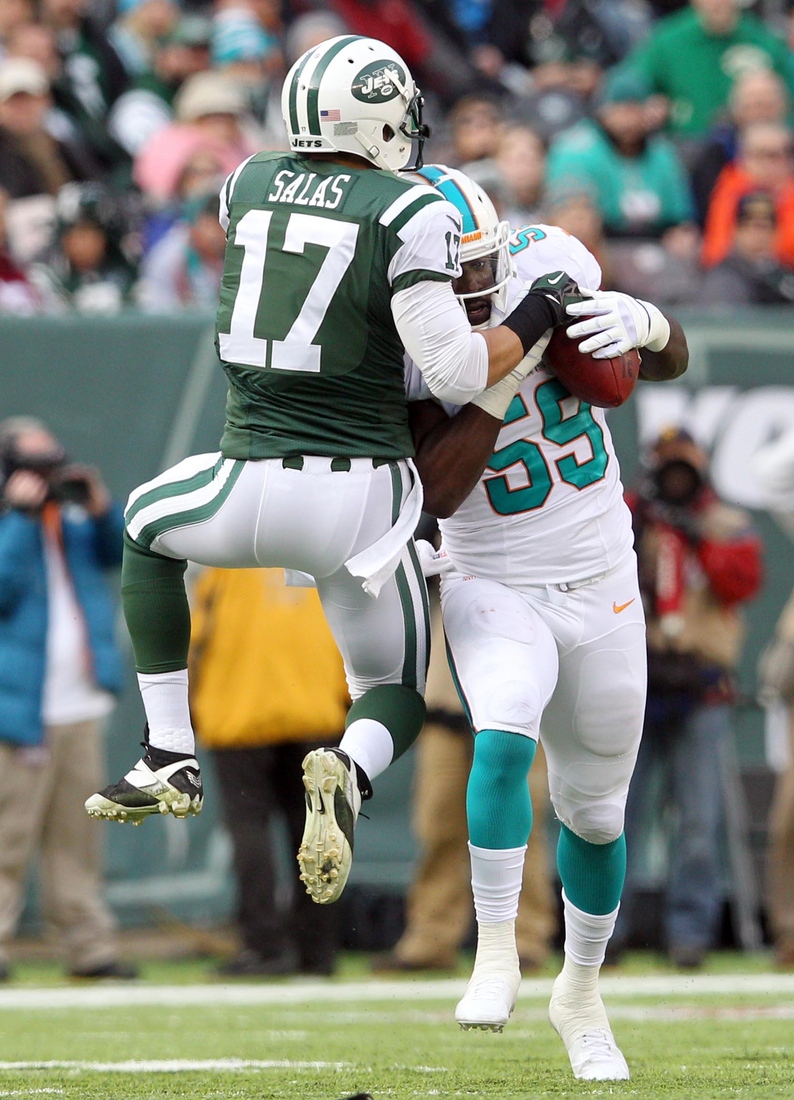 New York would then take two-minutes off the clock, starting in the first quarter and continuing into the second period, on a five play drive with a net of nine-yards gained. The Dolphins would again start driving the ball down the field, only to give the ball to New York, this time off a tipped pass that floated down the field and was intercepted by Antonio Cromartie.

The Jets would go three-and-out on the subsequent possession, but Miami would again fail to convert a 4th-and-1, this time on a bad overthrow from Tannehill, intended for an open Charles Clay. Miami drove 51-yards on eight-plays before the turnover on downs.

The Jets would again go three-and-out.

The Dolphins would finally get on the scoreboard with a 7-play, 38-yard drive that took just 51 seconds. Kicker Caleb Sturgis would connect on a 34-yard field goal, and give Miami the 3-0 lead with less than a minute remaining in the first half.

To answer the Dolphins score, New York would convert a 2nd-and-1 only to see Smith throw his interception, allowing linebacker Dannell Ellerbe to come away with the ball. The Dolphins would take over on the Jets' 44-yard line, move the ball 19-yards in 17-seconds and double their score with a 43-yard field goal from Sturgis.

The opening drive for each team would be a three-and-out, before the Jets actually picked up two first downs on a drive, moving the ball 25-yards on four plays before Simms fumbled the shotgun snap and Philip Wheeler was able to land on the ball, giving Miami the ball at New York's 48-yards. Two plays later, Brian Hartline would break a tackle on a short Tannehill pass, and run 31-yards for the touchdown. 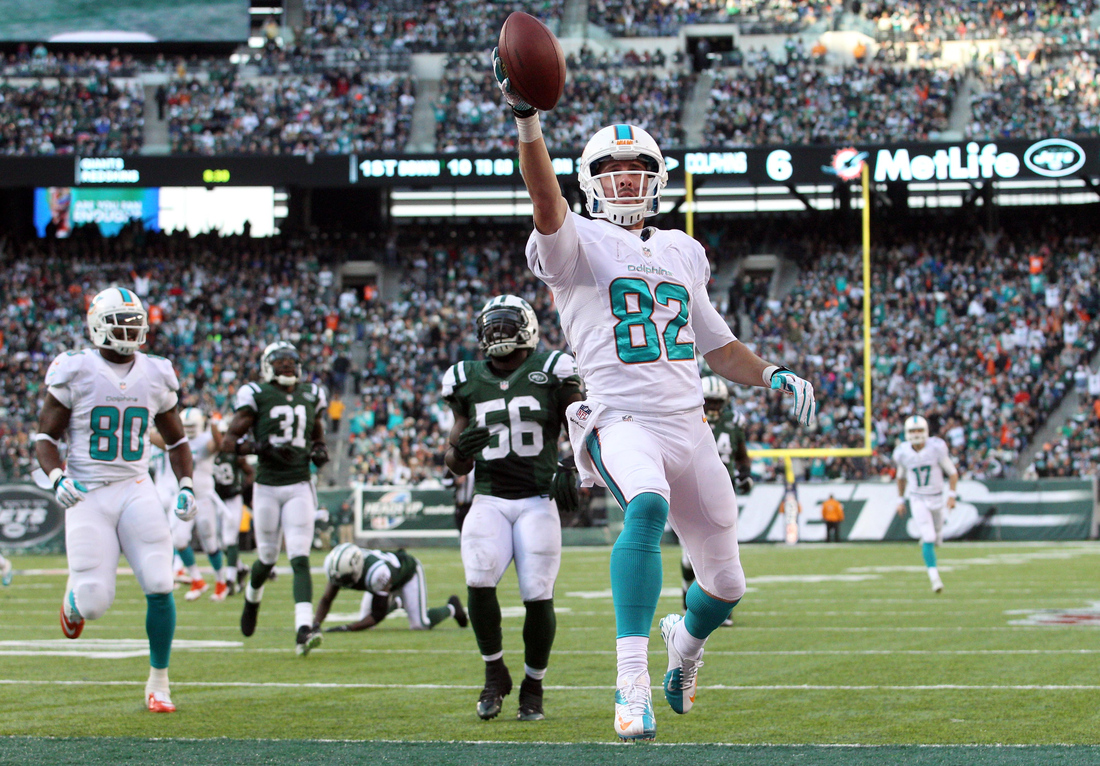 New York would answer with their best drive of the game, going 63-yards on 11-plays, including a 32-yard run from Chris Ivory to start the drive. However, the Dolphins defense would prevent the touchdown, holding on second- and third-and-goal from the Miami two yard line and forcing the 20-yard field goal, the only points the Jets would score all game. 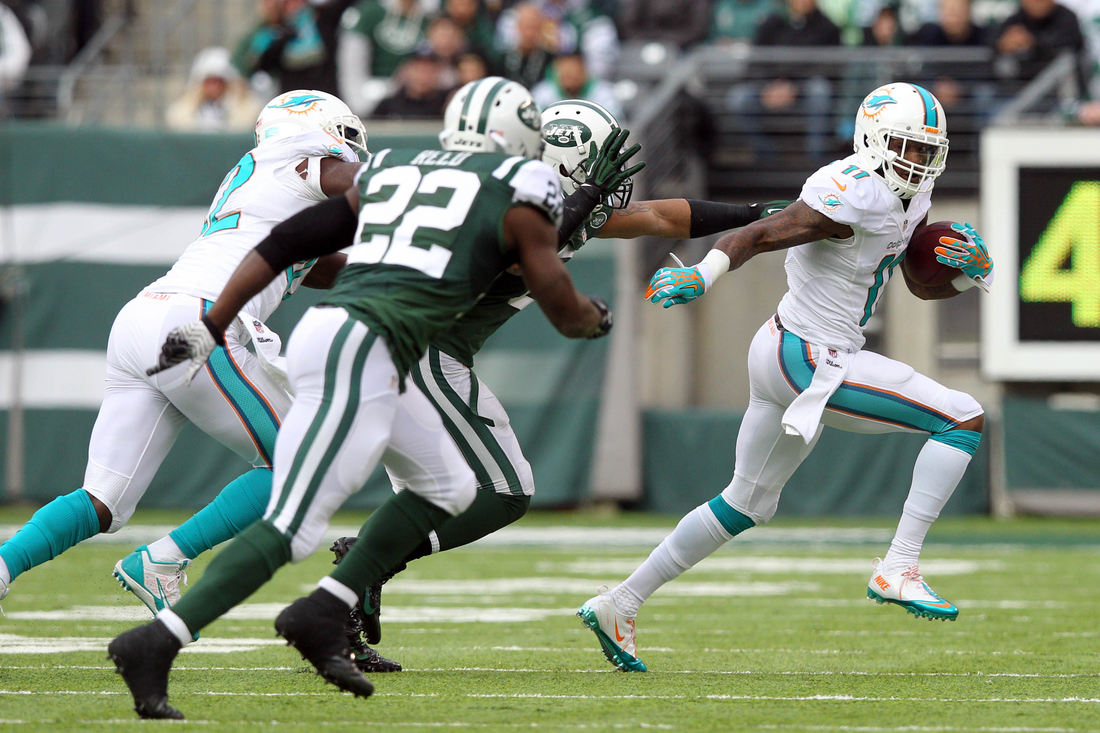 The Dolphins would take their next possession 56-yards, half of which came on a 28-yard touchdown reception from Mike Wallace, who turned a simple hitch route into a score.

New York would run two more plays, including a five-yard sack on Simms by Koa Misi, before the end of the third period. Miami led 20-3 at the end of the first 45-minutes of play.

The final 15-minutes would start with the Jets failing to convert on third down when Vernon again found the quarterback for a 9-yard sack, and the Jets would be forced to punt. After trading three-and-outs, the Dolphins would again drive the field, going 61-yards in 11 plays, and chewing up 6:15 on the clock. The drive appeared to end in a 4-yard Lamar Miller touchdown run, but a booth review reversed the ball, putting the ball at the one yard line, ruling Miller's knee touched the ground just before he crossed the goal line. After Miller gained no yards on the next play, Sturgis again connected on a field goal, this time from 18-yards, extending the Dolphins' lead to 23-3.

The last real attempt by the Jets to find some points came on the next possession, when Simms drove New York 48-yards, down to the Miami 20 yard line. However, on 4th-and-18, thanks to Vernon again getting to the quarterback, this time on first down and giving him a game high 2.5 sacks on the day, Simms threw a pass intended for Stephen Hill in the end zone, but cornerback Brent Grimes slid in front of him and picked off the pass. 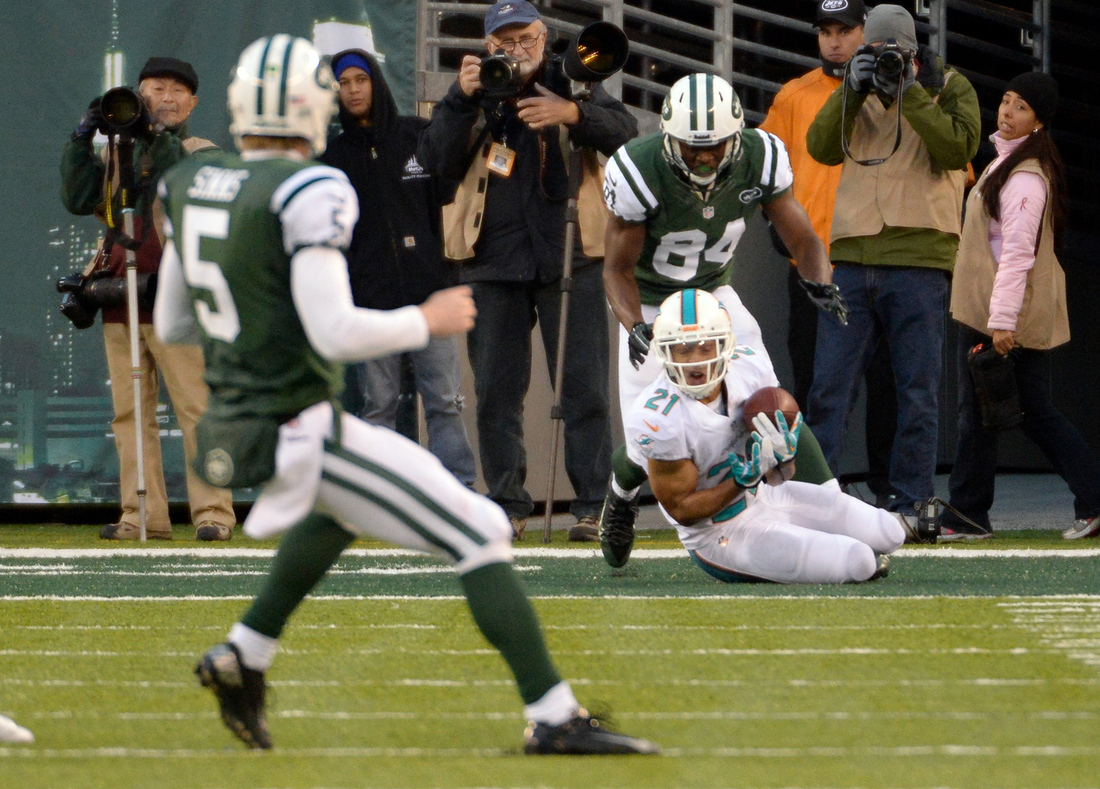 The Dolphins would punt six plays later, but hold the Jets to a turnover on downs on four plays, before Tannehill took a knee to end the game. 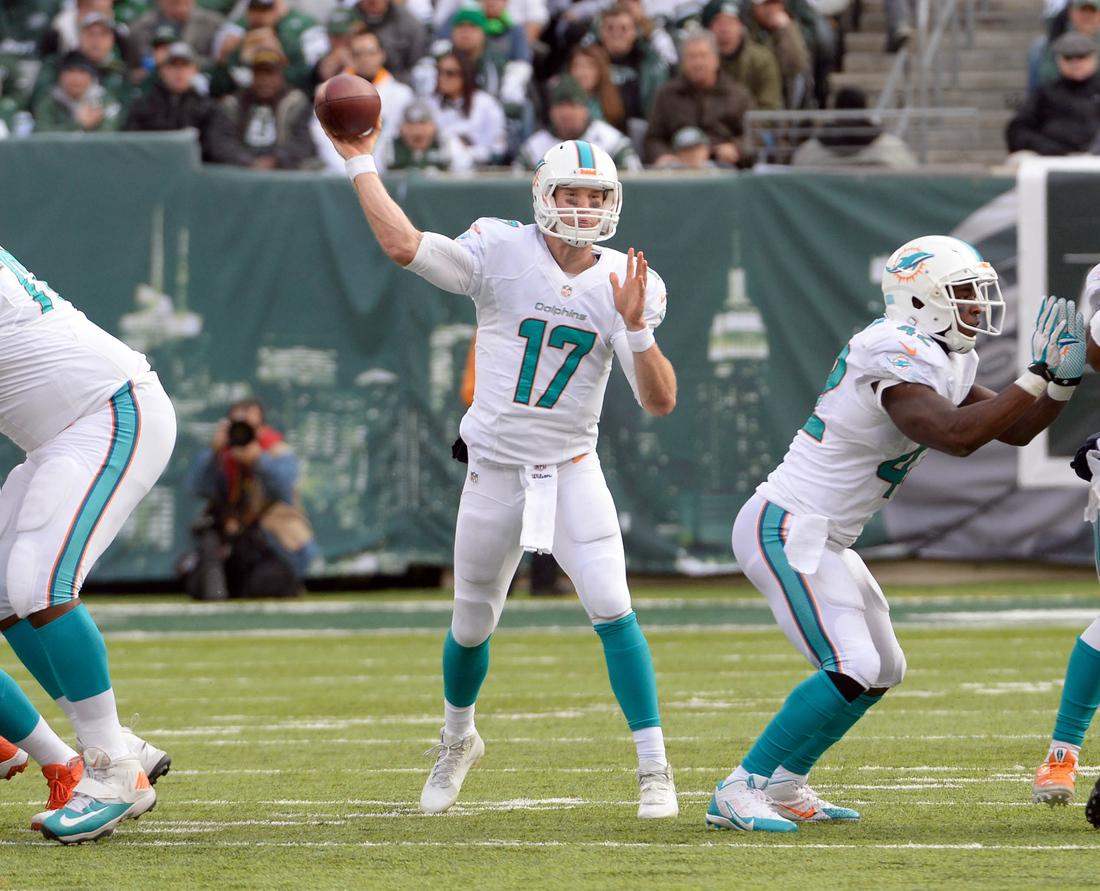 The Miami offense ran 80-plays during the game, with the Jets running 54, averaging 3.3 yards per play, compared to Miami's 5.7 yards. The Dolphins ran for 125 yards on the NFL's top ranked rushing defense, a defense that had been allowing just 72.6 yards per game, while holding the eighth best rush offense, averaging 127.0 yards per game, to just 99-yards.

Miami's offensive line, which has been allowing four sacks per game this year, held the Jets' pass defense, which had 32 sacks entering the game, tied for the 12th most in the league, to just one sack. That's despite again changing the starting lineup, as center Mike Pouncey returned from the illness that caused him to miss two games, and Nate Garner moved back to left guard from center. The turmoil continued during the game, as John Jerry was injured and missed his first snaps of the year, with Sam Brenner coming off the bench, after two starts at left guard, to play in Jerry's right guard position.

The Dolphins defense recorded four sacks during the game, led by Vernon's 2.5. Koa Misi added his one, and Wheeler recorded the other half-sack. The Dolphins also had the two interceptions, one from Ellerbe and one from Grimes.

Hartline led the game in receptions (9), yards (127), yards per reception (14.1), and longest reception. He was tied with Wallace with one touchdown each. Wallace caught seven passes for 82-yards, with the score, and Clay added seven receptions of his own, with 80 yards gained. Lamar Miller, who caught one pass for 13-yards, gained 72-yards on the ground on 22 carries, while rookie Mike Gillislee made his NFL debut with six carries for 21-yards. Marcus Thigpen added four carries for 10-yards. 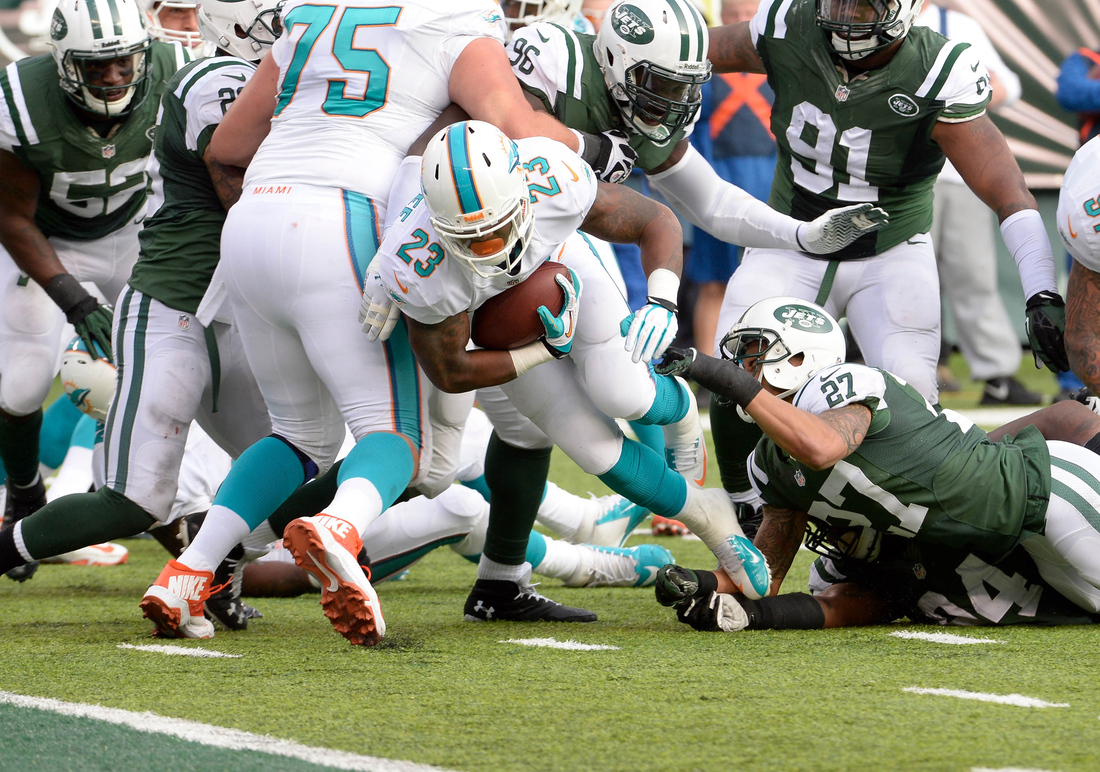 The performance from Olivier Vernon against the Jets earned the second-year defensive end AFC Defensive Player of the Week honors. The Dolphins and Jets kickoff at 1pm ET. Miami needs a win and a loss from the Baltimore Ravens or a win by the San Diego Chargers to make their first postseason appearance since 2008.