The Miami Dolphins lost to the Buffalo Bills, with an embarrassing 19-0 final score. We take a look back at the game today with a look at the defensive snap counts for Miami. 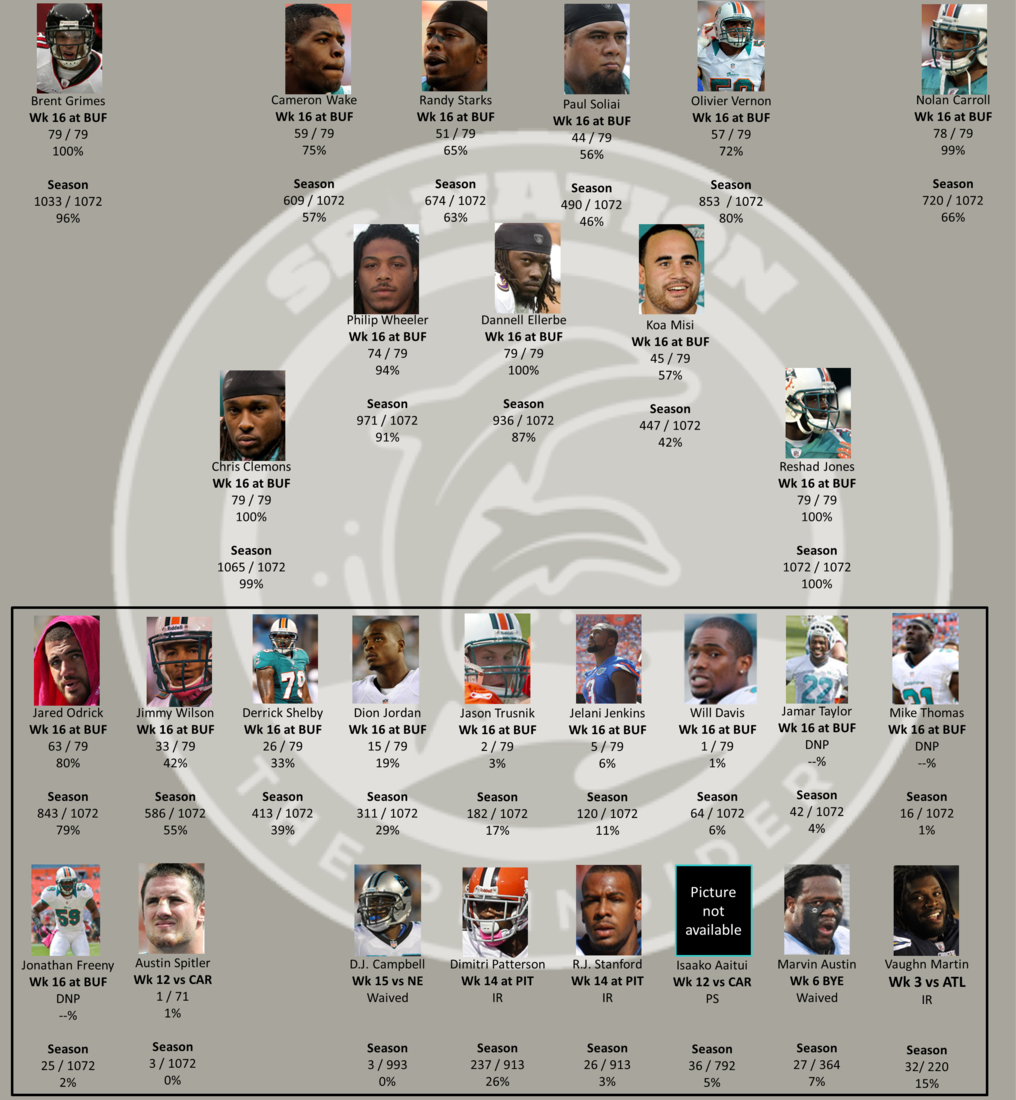 The Dolphins could not do anything right this past Sunday, losing to the Buffalo Bills 19-0 in a game where the offense couldn't get started and the defense couldn't stop anyone. The loss took control of the final playoff spot from Miami and made it so they have to win in Week 17 against the New York Jets, as well as get some help elsewhere around the league, if they want to have a chance at January football.

The Miami Dolphins lost in embarrassing fashion on Sunday when they were shutout 19-0 by the Buffalo Bills. We take a brief look back at the game this morning through the offensive snap counts from the Dolphins.

All 16 AFC teams have played their Week 16 games, meaning we can now take a look at the current postseason standings. And, despite an ugly loss to the Buffalo Bills, the Miami Dolphins have moved into the 6th seed.

Against the Bills, defensive ends Cameron Wake and Olivier Vernon started, along with defensive tackles Paul Soliai and Randy Starks. Of the four, Wake played the most snaps, 59 of the 79 defensive plays. Vernon appeared on the field 57 times, Starks 51 times, and Soliai had 44 snaps played. Coming off the bench, defensive tackle Jared Odrick actually played the most snaps this week of any defensive lineman, taking 63 plays, while defensive ends Derrick Shelby and Dion Jordan played 26 and 15 snaps, respectively.

Starting linebackers Dannell Ellerbe played every one of the 79 plays, while Philip Wheeler was on the field 74 times, and Koa Misi made 45 appearances. Jelani Jenkins added five snaps, Jason Trusnik appeared twice, and Austin Spitler was out on the field for the defense one time.

Brent Grimes and Nolan Carroll started at cornerback, a week after both of them had to miss the end of the game against the New England Patriots after being injured. Grimes took all 79 snaps Sunday, while Carroll missed one. Behind the starters, Jimmy Wilson, the Dolphins' primary nickel corner this season, played 33 times and Will Davis, who saw a huge jump in playing time against the Patriots after the Grimes and Carroll injuries, had one appearance against the Bills' offense.

Finally, the safeties continue to stay out on the field, with both Reshad Jones and Chris Clemons playing each one of the 79 plays.