AFC Playoff Scenarios Week 17: How do the Dolphins clinch?

The Miami Dolphins can clinch a postseason berth this weekend, allowing them to make their first playoff appearance since 2008. But, how do they do it? We break it down today.

Share All sharing options for: AFC Playoff Scenarios Week 17: How do the Dolphins clinch?

The 2013 version of the Miami Dolphins have been infuriating and disappointing at times this season. But, this is a team that is still fighting for a playoff spot in the NFL's Week 17, not something we are used to seeing around the Dolphins. Think about it. For nearly the entire last decade, the Dolphins have long been out of postseason consideration by the time Week 17 rolls around.

This year is different. The Dolphins are still playing for something - assuming they don't come out this Sunday against the New York Jets and look as bad as they did against the Buffalo Bills last Sunday.

How do the Dolphins clinch the postseason? There are four scenarios for Miami to continue playing in January.

First, if Miami wins and the Baltimore Ravens lose or tie, Miami is in. This scenario keeps the Ravens from being tied with the Dolphins in the final standings, meaning the head-to-head two-team tie break advantage the Ravens have over Miami would not come into play.

Second, if Miami wins and the San Diego Chargers win, Miami is in. This scenario negates the Ravens' head-to-head advantage by ensuring Miami and San Diego would be in a three way tie, should Baltimore win. Since the Chargers and Ravens don't face each other this season, the head-to-head tie break rule cannot be used to solve a three team tie. Instead, it would have to fall to the conference record for all three teams, and the Dolphins would win that. If San Diego wins, but Baltimore loses, the Dolphins would beat the Chargers in a two-team tie based on the head-to-head advantage Miami has for beating the Chargers this year.

The third scenario involves a Miami tie with the Jets this weekend. If the Dolphins and Jets tie, and the Ravens lose, and San Diego either loses or ties the Chiefs then Miami would be in.

And, finally, if the Dolphins and Jets tie, the Ravens tie the Cincinnati Bengals, and the Chargers and Chiefs tie, Miami is in.

If the Dolphins lose, they will be eliminated from post season contention because they would fall behind the Jets in the AFC East division standings, based on division win percentage.

To try to make it a little easier to follow, here are all the scenarios, graphically: 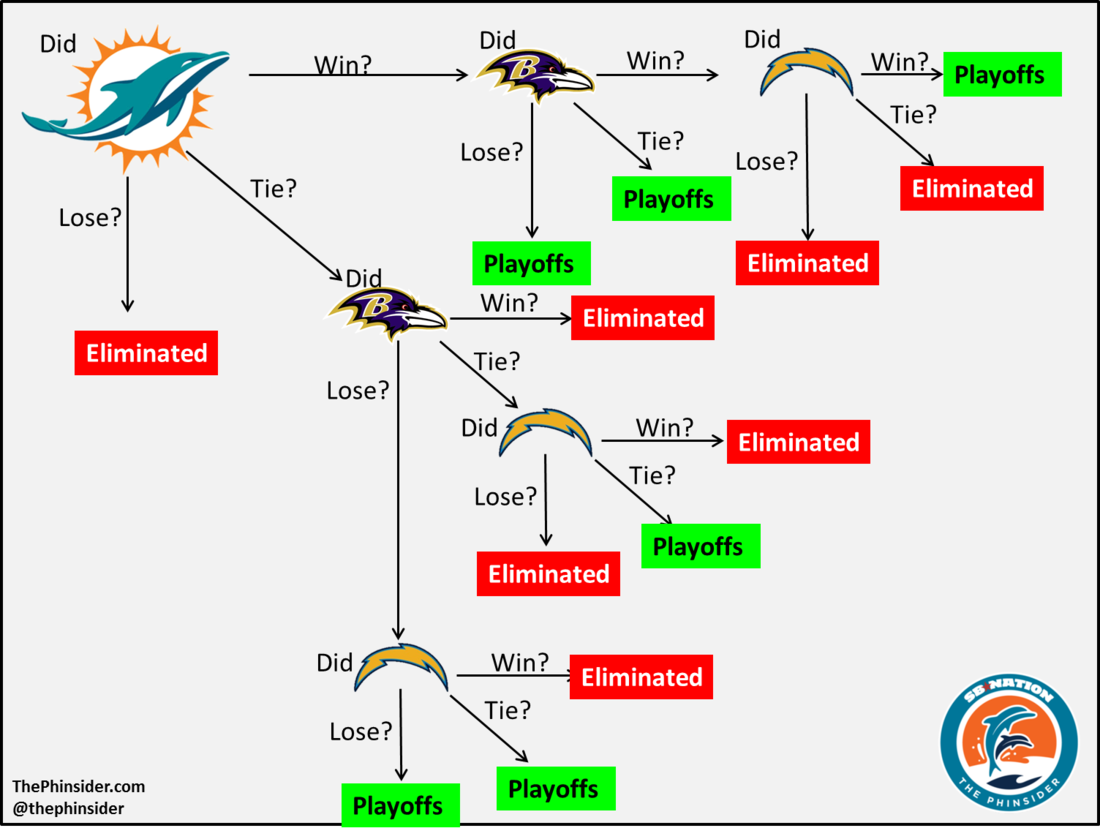 Hopefully that all makes sense, and you can follow the flow chart. What do you think? Will Miami make the playoffs?