The AFC schedule is complete for Week 13, with two NFC teams scheduled to face off in tonight's Monday Night Football contest. With that, we can take a look at the current playoff standings for all 16 AFC franchises. 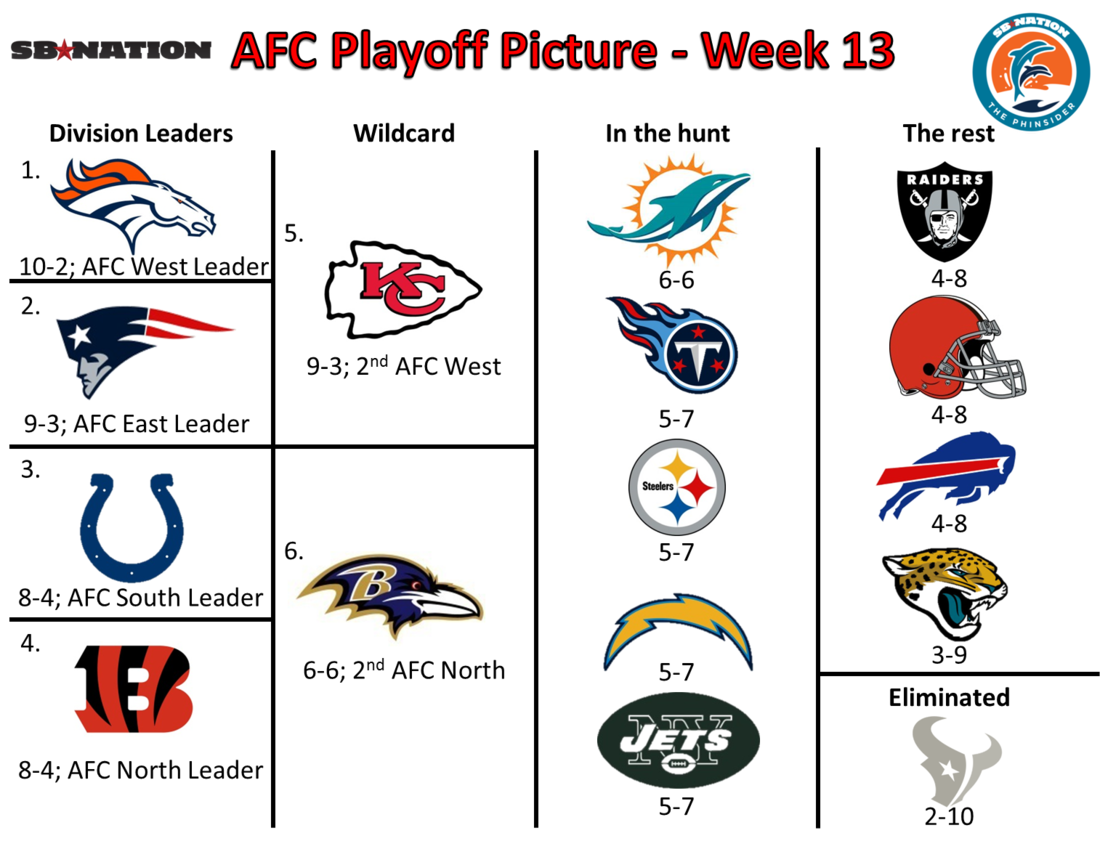 The AFC Playoff picture cleared up a little this week, but by no means is it solid yet. The top of the field still sees the Denver Broncos laying claim to the home-field advantage position with four games left to play. Just a game behind them is the AFC East division leading New England Patriots, three games clear within the division. The third and fourth seeds are both 8-4, with the Indianapolis Colts holding the better conference record tiebreaker over the Cincinnati Bengals.

The Kansas City Chiefs, who started the season 9-0, but have now lost three straight, including two to the Broncos, are still in the fifth position and, barring a complete meltdown should be a lock in the spot.

Which brings us to the final Wildcard position. After last week's six way tie for the spot, only the Baltimore Ravens and Miami Dolphins won this week to move to 6-6 on the season and a tie for the position. Baltimore beat the Dolphins in Week 5 this year, giving them the head-to-head tiebreaker.

After that, the Tennessee Titans, Pittsburgh Steelers, San Diego Chargers, and New York Jets are all 5-7, a game behind the final Wildcard slot. The Oakland Raiders, Cleveland Browns, and Buffalo Bills are next, at 4-8 while the Jacksonville Jaguars are 3-9 and mathematically hanging on to the playoff race.

Finally, the Houston Texans are 2-10, and are the first team in the AFC to be eliminated from the postseason.

For the Dolphins, their final four games are at the Steelers, home against the Patriots, at the Bills, and home against the Jets. If they can win three of those four, they should be in position to make the playoffs for the first time since 2008.