The Miami Dolphins beat the New England Patriots last Sunday 24-20, leveling the season series between the two teams and keeping Miami in control of their own Playoff destiny. Today, we look back at the game through the snap counts for the Dolphins.

I'll be honest, between a crazy week at work, spending Monday traveling back from the game, and trying to keep up with all of the other things happening around the team and the league, I'm simply behind on things this week. The two main things that I owe you are the snap counts from last Sunday, as well as the second gallery of pictures I took at the game. We take care of the snap count problem right now, with both the offense and defense included in this post. 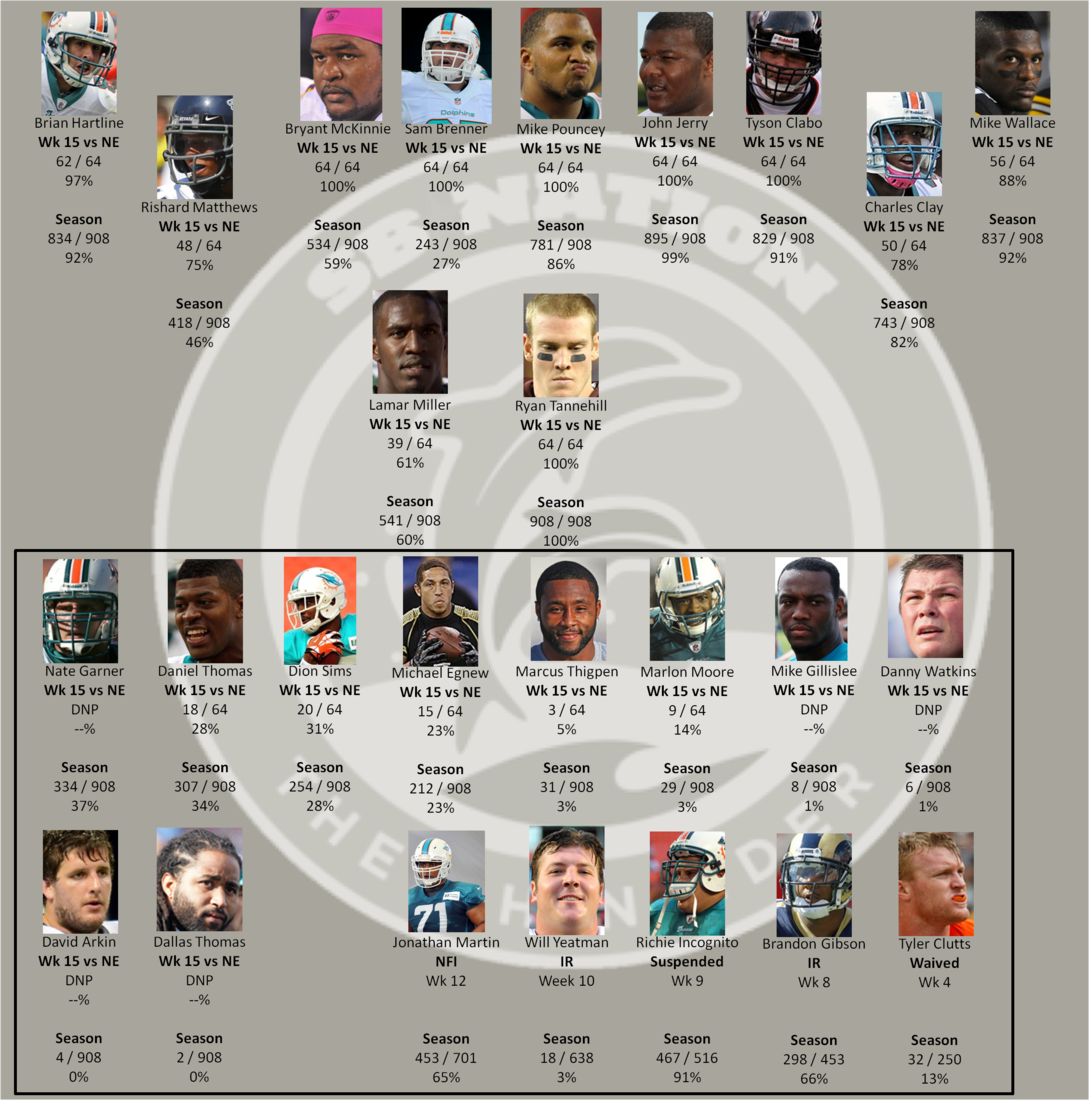 On offense, the Dolphins had 16 different players take at least one snap, with the offensive line (tackles Bryant McKinnie and Tyson Clabo, guards Sam Brenner and John Jerry, and center Mike Pouncey) and quarterback Ryan Tannehill all playing all 64 snaps.

Wide receiver Brian Hartline was on the field for 62 plays, with Mike Wallace playing 56 snaps, and tight end Charles Clay adding in 50-offensive plays for himself. Rishard Matthews, who started the game in a three wide receiver set alongside Hartline and Wallace, made 48 appearance. Finally, running back Lamar Miller rounds out the starters, taking 39 snaps.

Coming off the bench, tight end Dion Sims led the way with 20 plays during the game. Running back Daniel Thomas took 18 snaps prior to injuring his ankle and missing the rest of the game; tight end Michael Egnew played 15 snaps during the contest. 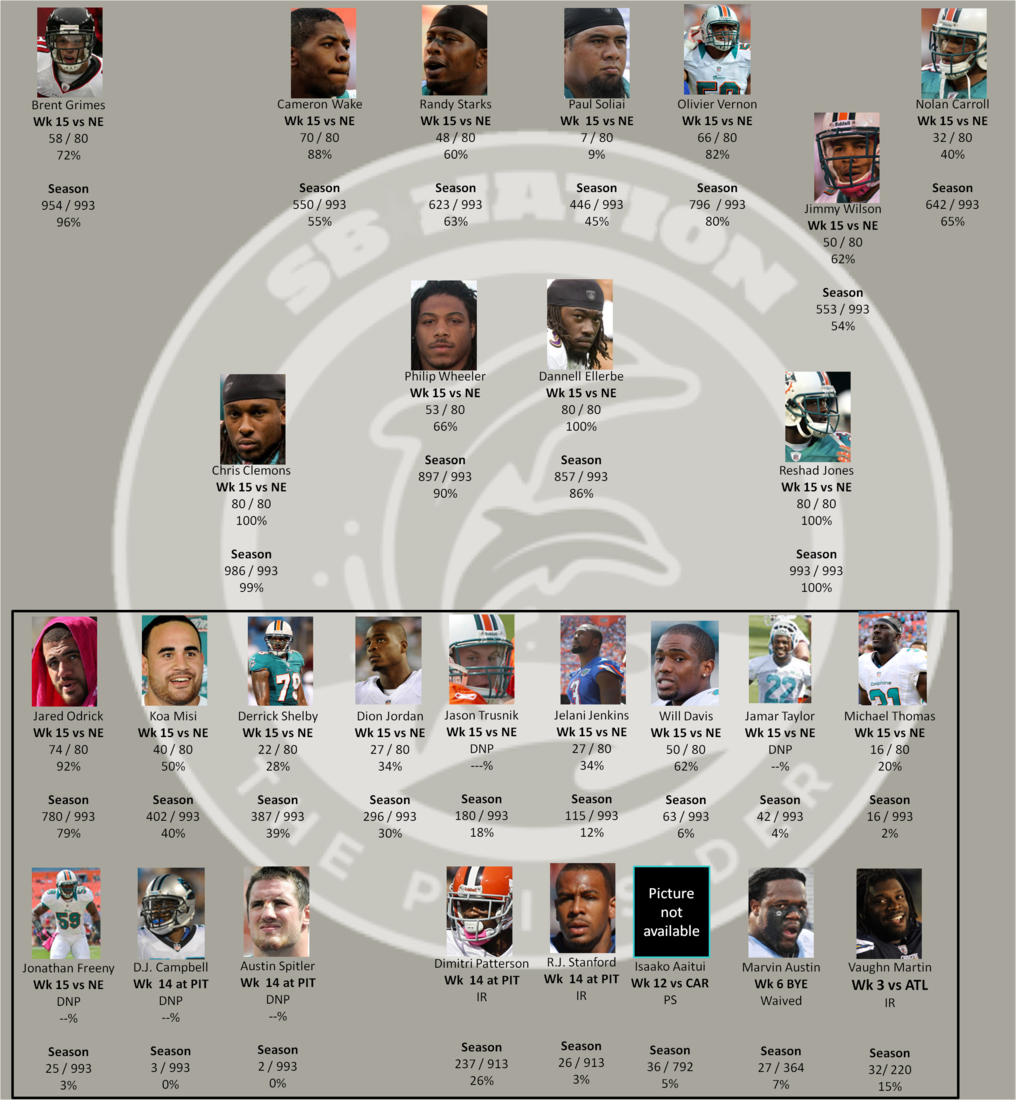 As for the defense, both safeties, Reshad Jones and Chris Clemons, as well as linebacker Dannell Ellerbe took all 80-defensive snaps, while linebacker Philip Wheeler played 53 times on Sunday. Koa Misi, again coming off the bench as the Dolphins started the game in a nickel formation, played exactly half of the snaps, appearing on 40-of-80 plays. Rookie Jelani Jenkins saw his most extensive use during the game, playing on 27 of the team's defensive snaps.

The cornerback position was a crazy one during the game, with both starters, Brent Grimes and Nolan Carroll, being forced from the game with leg injuries. Grimes, who was cramping and suffered a groin issue, left after 58 snaps, while Carroll left the game after 32 plays having injured his knee. In their places, nickel cornerback Jimmy Wilson moved outside and rookie Will Davis took the opposite side of the field. Both played 50 snaps, with game heor Michael Thomas, with the Dolphins just five days prior to kickoff, filled in as the nickel cornerback and took 16 snaps.

The defensive line was led by Jared Odrick, who started the game on the bench in the three-man rotation between him, Randy Starks, and Paul Soliai. Odrick took 74 snaps while Starks made 48 appearances. Both of them were forced to play more than expected as Soliai could only be on the field for seven snaps due to an ankle injury. At defensive end, Cameron Wake took 70 snaps, while Olivier Vernon added 66 of his own. Rookie Dion Jordan appeared 27 times, and Derrick Shelby took 22 snaps.