The Miami Dolphins beat the Pittsburgh Steelers 34-28 on Sunday, moving the South Florida franchise to 7-6 on the season and keeping pace for the last playoff berth in the AFC. We take a look back at the game through the Miami defensive snap counts today. 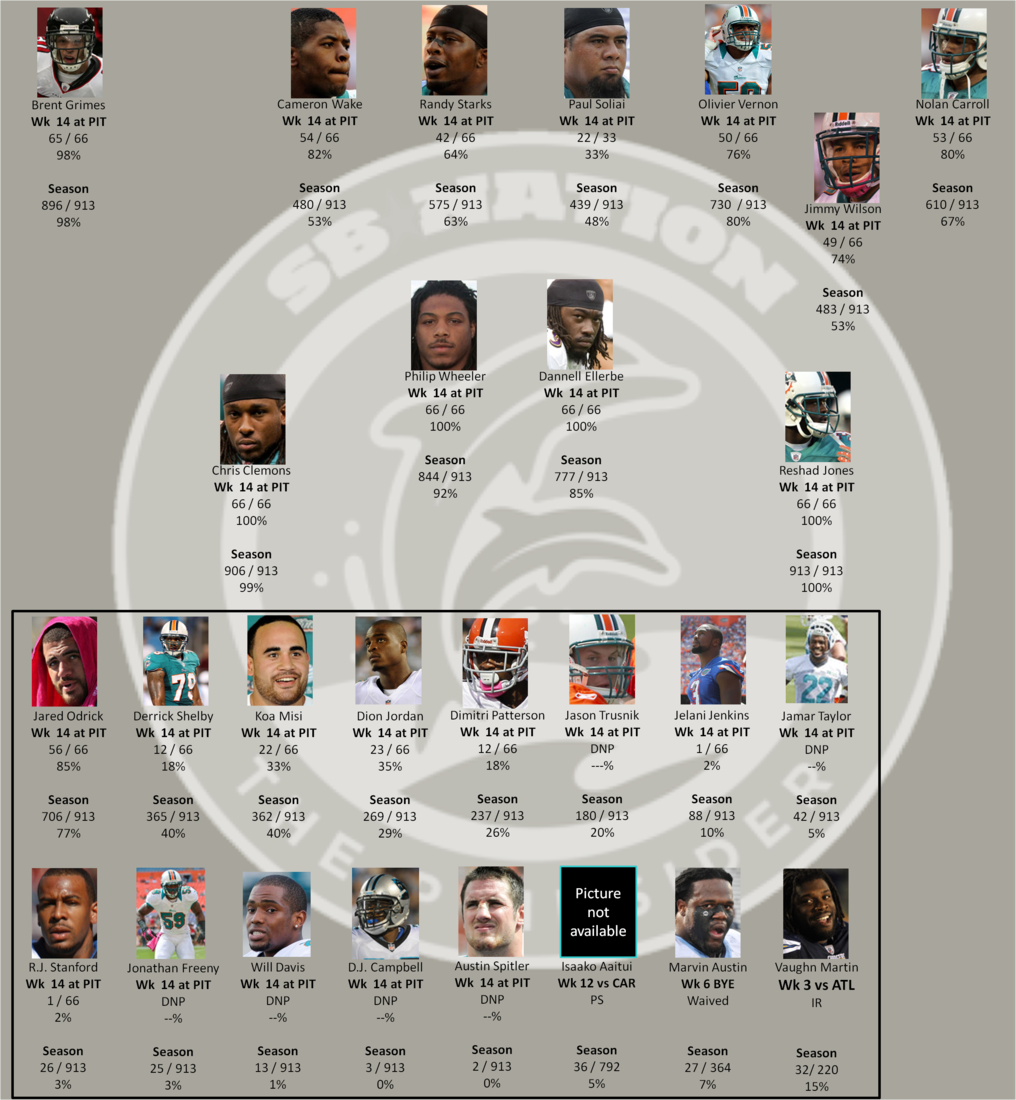 Earlier today, we looked back at the Miami Dolphins' 34-28 victory over the Pittsburgh Steelers in snowy Heinz Field on Sunday through the offensive snap counts for Miami's players. We follow that up now with a look at the 66-defensive snaps that took place during the game for the Dolphins.

The Miami Dolphins beat the Pittsburgh Steelers 34-28 on Sunday, moving the South Florida franchise to 7-6 on the season and keeping pace for the last playoff berth in the AFC. We take a look back at the game through the Miami offensive snap counts.

The Miami Dolphins held on to win against the Pittsburgh Steelers, keeping themselves in the playoff chase, while all-but-ending Pittsburgh's chances. Miami scored the game winning touchdown in a back-and-forth contest with 2:53 remaining.

As usual, the Miami safeties played every snap of the game, with both Chris Clemons and Reshad Jones reaching the 100-percent mark. Jones has played all 913-snaps this year for the defense, while Clemons has missed just seven, and is nearing the statistical 100-percent mark for the year again.

In front of them, two linebackers got credit for the start on Sunday, with Dannell Ellerbe and Philip Wheeler in for the first play, and for all 65-subsequent snaps. Koa Misi, the third linebacker, was on the bench to start the game, with the Dolphins starting in the nickel package, and only played 22 of the 66-snaps. Rookie linebacker Jelani Jenkins did make one appearance during the contest.

In the nickel formation, Brent Grimes and Nolan Carroll were joined by Jimmy Wilson as the three starting cornerbacks. Grimes was on the field for all but one play Sunday, while Carroll played 53-snaps, and Wilson added 49 of his own. Dimitri Patterson made 12-appearances, while R.J. Stanford participated in one play. Both Patterson and Stanford were placed on injured reserve after the game, Patterson due to the groin injury that has caused him to miss most of the season and Stanford with a broken leg he suffered on special teams coverage.

Finally, the offensive line started the game with their normal Cameron Wake, Randy Starks, Paul Soliai, and Olivier Vernon lineup. However, it was defensive tackle Jared Odrick who played the most snaps among the linemen, appearing in 56-plays. Wake was second with 54-snaps, which moved his season total back to having played the majority of defensive snaps for Miami this year. Vernon took 50-snaps, while Starks added 42-plays of his own. Rookie Dion Jordan added 23-snaps from the bench, one more than Soliai contributed during the game, thanks to an injury that briefly had him sidelined. Derrick Shelby made 12-appearances during the game.