Everyone has their own take and an opinion on what is happening in the Miami Dolphins' locker room right now. Is Jonathan Martin at fault? Is Richie Incognito a racist cancer? Is Joe Philbin negligent? ESPN's Cris Carter weighed in this morning with one of the best inside looks yet.

The Miami Dolphins' locker room and the alleged bullying of Jonathan Martin by Richie Incognito is the current top story in the NFL.  It's bled over into the mainstream news, and it is being covered by CNN, FoxNews, and many others.  And, that's all without knowing the full story.

Everyone has their own take on the situation, and the story is not going away any time soon.  Earlier today, ESPN's  Cris Carter, a former member of the Dolphins during his Hall of Fame career as a wide receiver and a high school football coach who is close to center Mike Pouncey from his high school days, gave one of the best summaries of what is happening during an appearance on SportsCenter. 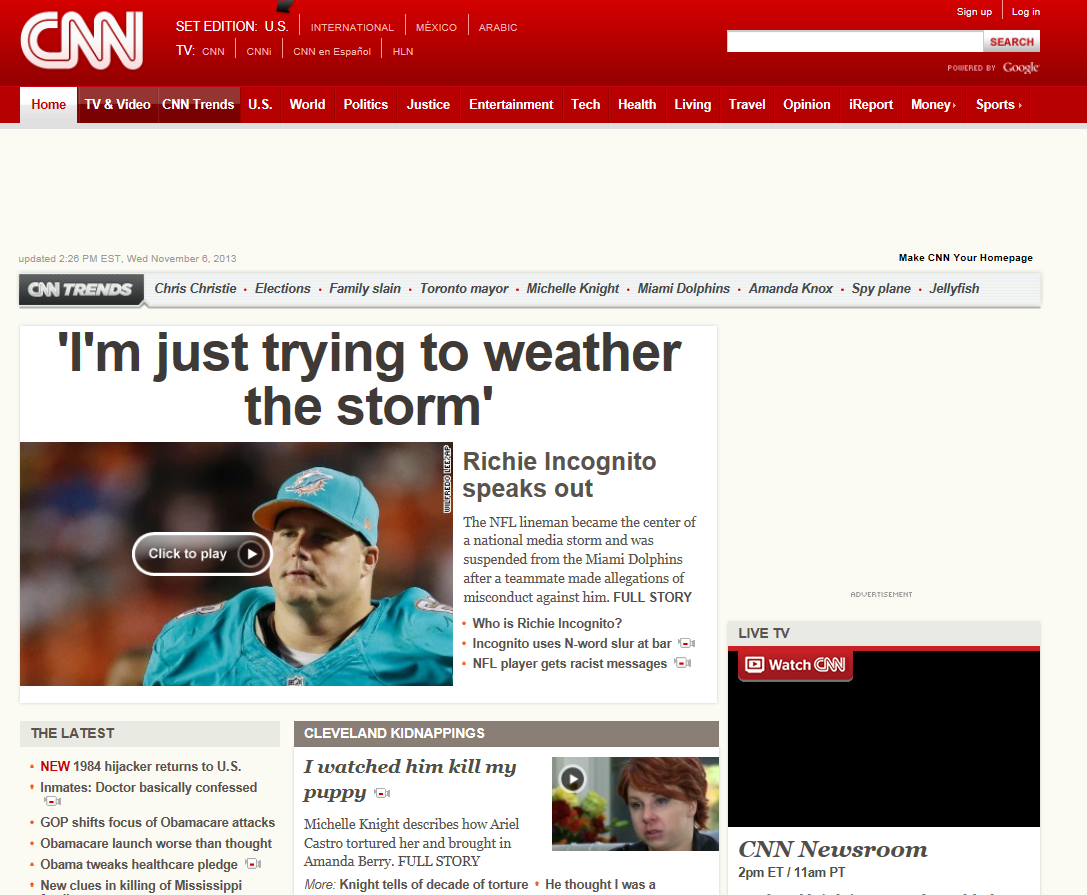 Martin left the team on October 28 following a prank in the team's cafeteria.  The prank, where the offensive linemen get up and leave the last person to sit down, has been played dozens of times, including on head coach Joe Philbin, with Martin included in those conducting the prank.  But, in this case, it was the last straw for Martin, who left the franchise and checked himself into a treatment facility for emotional issues.

However, according to Carter, this was not the first time Martin had contemplated leaving the Dolphins.  Carter pointed out that lots of young players question their ability to make it in the NFL, and consider quitting.  He also said that the stress of being a high draft pick, in Martin's case a second rounder, can add to that idea of not being able to perform at the NFL level, with players struggling from being among the top players in college to not having the same sort of success immediately in the pros.

Pouncey told Carter that he was never approached by the Dolphins coaches to toughen up Martin, despite Incognito saying he and Pouncey were charged with doing exactly that.  Last night, sources told the South Florida Sun Sentinel's Omar Kelly that coaches did ask for Incognito to work on Martin.  Those sources also said that the coaches did not realize how far Incognito had gone, and that it was beyond expectations.

Carter went on to say that the Dolphins' leadership council, to which the players elected Incognito this summer, did not know about the situation between Incognito and Martin.  The council was not told about the voicemail or texts that Martin turned over to the team on Sunday, prior to this week.

Carter also weighed in on the money issue, with the Dolphins veterans essentially using the younger players as ATMs, paying for food and trips.   Carter suggested putting a ceiling on the amount younger players are allowed to pay for veterans.  Martin reportedly had to pay $15,000 for a veteran trip to Las Vegas, but did not attend the trip.  There are also reports of Incognito taking a credit card from quarterback Ryan Tannehill to buy a jet ski during Tannehill's rookie season last year.

Incognito is currently suspended by the Dolphins while Martin is believed to be home with his family in California.  The Dolphins originally paid for Martin's family to fly to Florida when Martin checked himself into the treatment facility, ESPN's Chris Mortensen said today on NFL Insiders.