The Miami Dolphins beat the Cincinnati Bengals during last Thursday's Week 9 kickoff game. Today, we take a look back at the defensive snap counts for the Dolphins from that game. 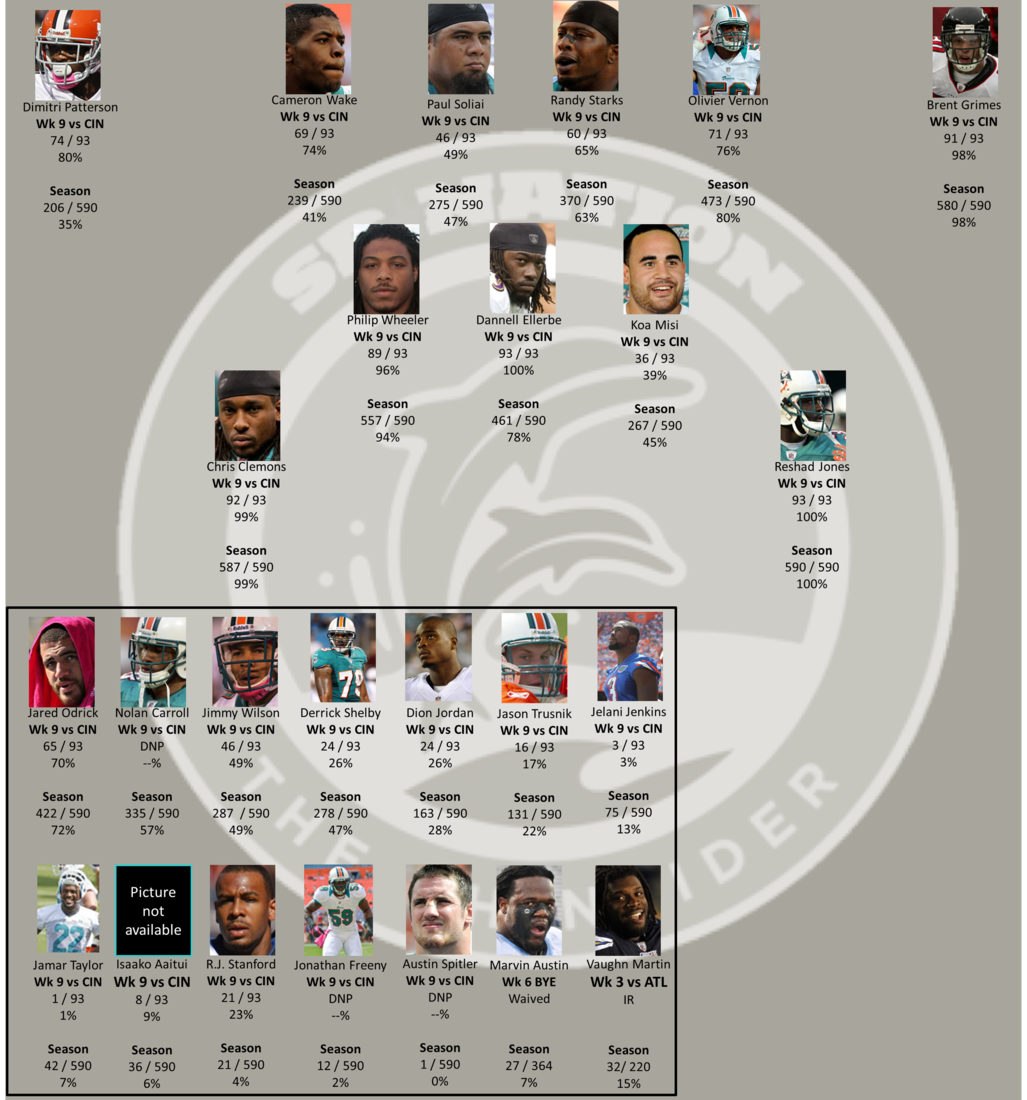 This morning, we took a look at the Miami Dolphins' offensive snap counts from their 22-20 overtime win over the Cincinnati Bengals. This afternoon, we switch sides of the ball to take a look at the Dolphins during the 93 defensive plays they had on Thursday Night Football.

Yes, 93 defensive plays. Kind of explains why the Dolphins seemed a little gassed at points during the second half, doesn't it?

Yet, two players were out there for every snap, linebacker Dannell Ellerbe and safety Reshad Jones. Safety Chris Clemons missed one play, and cornerback Brent Grimes sat out two snaps.

Linebacker Philip Wheeler played 89 of the 93 snaps, while cornerback Dimitri Patterson took 74 snaps. Olivier Vernon was on the right defensive end for 71 of the 93 snaps and Cameron Wake took 69 plays at the other defensive end slot, with Jared Odrick not starting but playing 65 snaps, Randy Starks started and played 60 snaps, and Paul Soliai started and was on the field for 46 plays.

Coming off the bench, safety/cornerback Jimmy Wilson played 46 snaps as well, while linebacker Koa Misi played the fewest snaps of any starter, being on the field 39% of the time, or for 36 snaps. Defensive ends Derrick Shelby and Dion Jordan each took 24 snaps and cornerback R.J. Stanford filled in for an injured Patterson, taking 21 snaps - his first defensive snaps of the season.

Linebacker Jason Trusnik filled in on 16 snaps during the game, while Isaako Aaitui was on the field eight times. Finally, linebacker Jelani Jenkins took three snaps and rookie cornerback Jamar Taylor was on the field for one snap.

Linebackers Jonathan Freeny and Austin Spitler did not see a defensive snap during the game.