The Miami Dolphins beat the Cincinnati Bengals during last Thursday's Week 9 kickoff game. Today, we take a look back at the offensive snap counts for the Dolphins from that game. 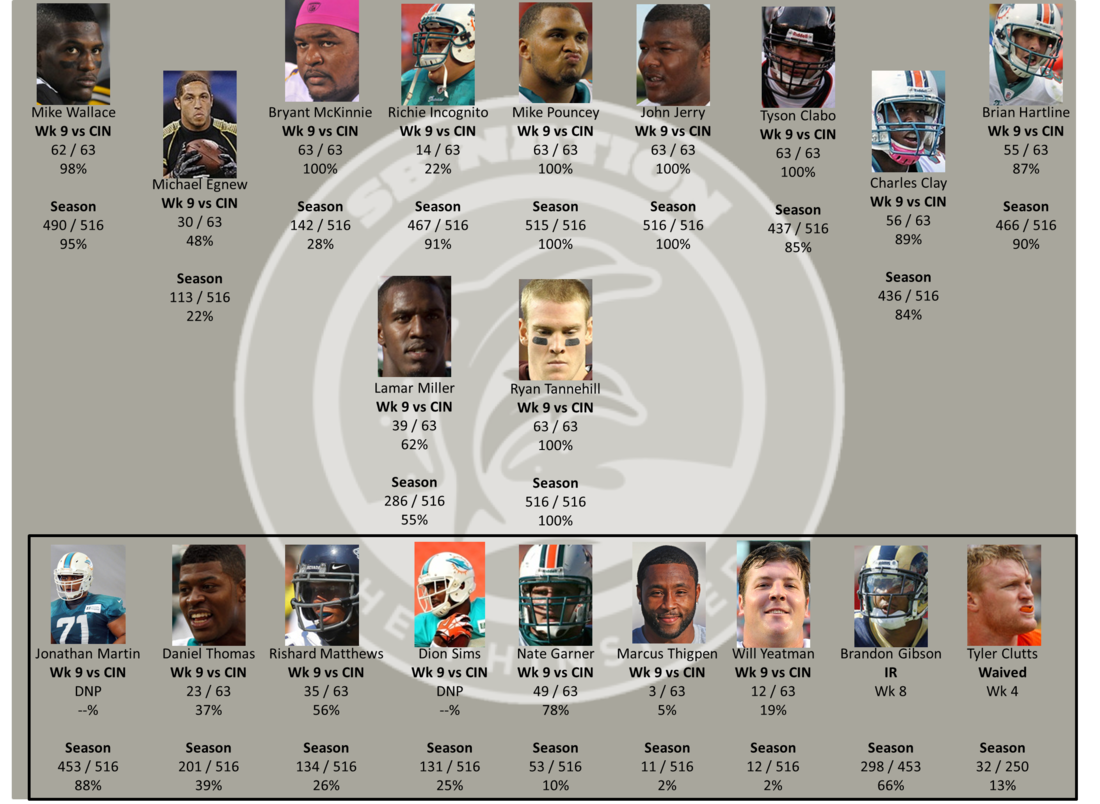 The Miami Dolphins beat the Cincinnati Bengals on a walk off safety Thursday, in a game that seems like it was played ages ago. Today, we revisit the game through a look at the 63 offensive snaps the Dolphins ran Thursday night.

The offensive line saw two changes during the game, with Tyson Clabo moving back into the starting right tackle position with Jonathan Martin out dealing with the situation currently embroiled around the team. Clabo played all 63 snaps, as did guard John Jerry, center Mike Pouncey, and tackle Bryant McKinnie. Guard Richie Incognito, the other side of the Martin situation at this point, only played 14 snaps Thursday, leaving the game with a neck stinger and opening up the door to Nate Garner, who saw 49 snaps of the 63 snaps, after having only played four snaps in the first eight contests this year. The Dolphins also had Will Yeatman make his season debut, playing 12 snaps, oddly as a tackle eligible, lining up at his old tight end position.

With Brandon Gibson officially on injured reserve, the Miami receivers saw a shake up as well, with Rishard Matthews playing over half the snaps (35-of-63) for the first time on the season. Starters Mike Wallace (62-of-63) and Brian Hartline (55-of-63) both saw their normal snap counts, while the tight ends saw an increase, starting with Charles Clay playing 56 snaps and Michael Egnew taking 30 snaps, his most of the year.

But, it was not as a pass catcher that Egnew made an impact on Thursday, but rather as a blocker, and primarily as a fullback, lead blocking for Lamar Miller and Daniel Thomas. Miller played 39 snaps, of 62% of the players, up eight percent from his season average, and apparently enough that offensive coordinator Mike Sherman said during his press availability yesterday that Miller could start seeing more than the 11 carries per game he is currently averaging. Thomas took 23 snaps Thursday, while Marcus Thigpen made three offensive appearances.

Joining Martin as a non-participant on the offense was tight end Dion Sims, who was out with a toe injury.