The Miami Dolphins beat the San Diego Chargers on Sunday. We take a look back at the game through the Dolphins' offensive snap counts. 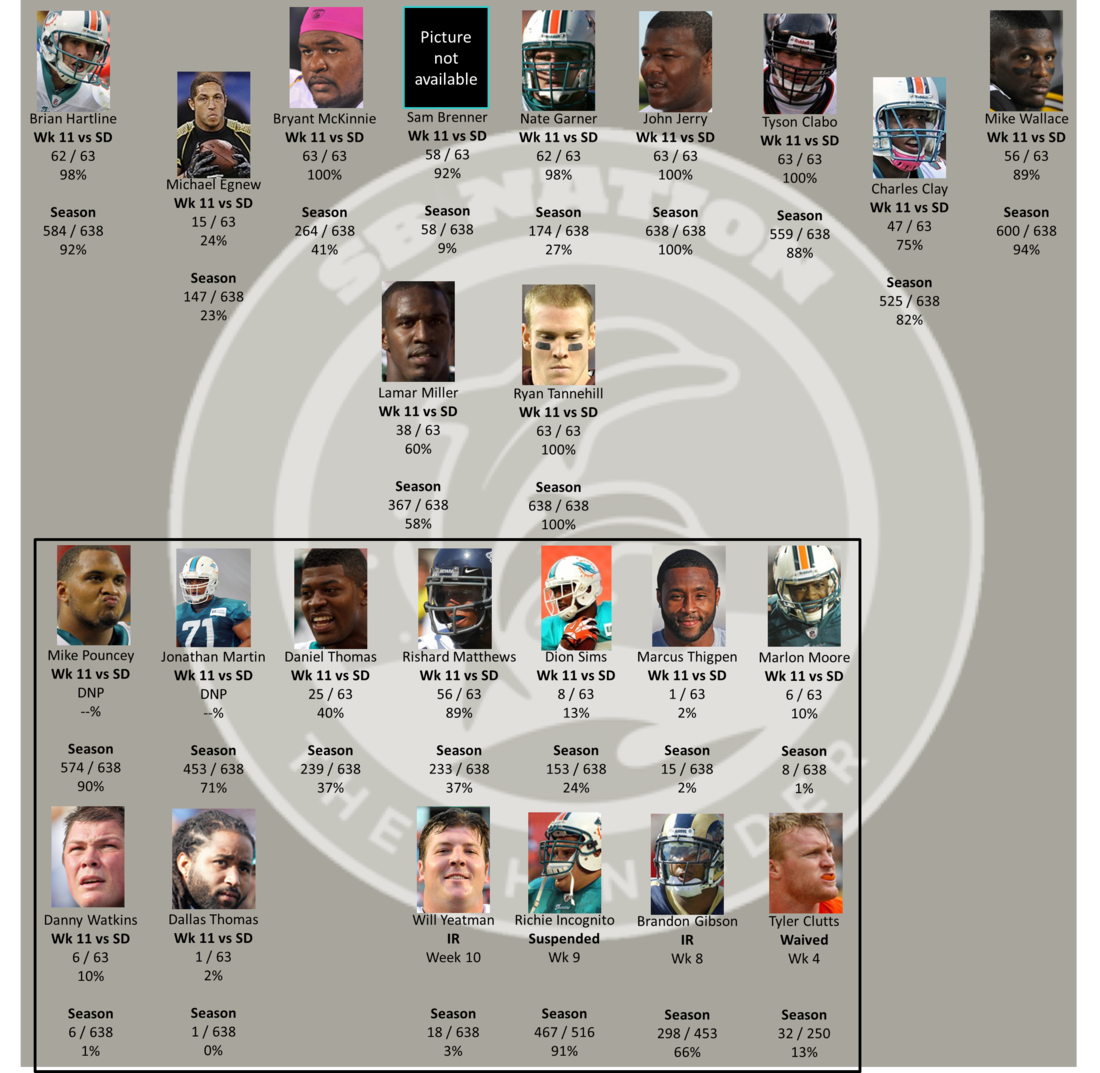 The Miami Dolphins held on to win 20-16 against the San Diego Chargers on Sunday, sealing the win with a Brent Grimes pass break up in the end zone. This morning, we take a look back at the game through the offensive snap counts for the Dolphins.

With center Mike Pouncey sitting out this game with a gallbladder infection, the Dolphins' offensive line was once again in flux, with several players moving positions, or making their season debut, because of it. It also means that only two players, guard John Jerry and quarterback Ryan Tannehill, have played 100% of the snaps this year, with both players accomplishing that feat again this week, being on the field for all 63 snaps.

Joining Jerry on the offensive line for every snaps were tackles Bryant McKinnie and Tyson Clabo, while center Nate Garner, making his first ever start at the position, missed one play with a shoe problem. Left guard Sam Brenner, who had been promoted off the practice squad this weekend, started on the line and played well, including moving to center for the one snap without Garner. Brenner played 58 of the 63 snaps, with Danny Watkins coming in to the lineup, making his Dolphins debut, for the five missing plays. The team also saw tackle Dallas Thomas make his NFL debut when he came in as a sixth offensive lineman on one play.

Wide receiver Brian Hartline sat out just one snaps this week, while across from him, Mike Wallace missed seven plays. Although he did not get the start this week, Week 10's breakout player Rishard Matthews, took the same number of snaps as Wallace, 56. Marlon Moore added six plays of his own.

Tight ends Charles Clay and Michael Egnew both get credit for the start, with Clay leading the position with 47 of 63 snaps played, or 75-percent of the Miami offense on Sunday. Egnew appeared 15 times, while rookie Dion Sims was on the field eight times during the game.

The running back position was a little strange this week, as Lamar Miller started and played 60-percent (38 snaps) of the time, but only carried the ball four time, while Daniel Thomas played 40-percent of the plays (25), but had 10 carries for 57-yards and a touchdown. Returner / running back Marcus Thigpen made one appearance during the contest, carrying the ball nine-yards on an end-around.