Chargers vs Dolphins recap: Miami comes away with 20-16 victory

The Miami Dolphins played a full 60 minute game on Sunday and came away with a victory, beating the San Diego Chargers 20-16. The win moved Miami to 5-5 on the season and in a tie for the last AFC Widlcard position.

Share All sharing options for: Chargers vs Dolphins recap: Miami comes away with 20-16 victory

The Miami Dolphins are tied for sixth in the AFC and are now .500 on the season, following a win over the San Diego Chargers on Sunday. It was a much needed win for a team dealing with five losses in six games, a player who quit the team, and an NFL investigation into the "bullying" that led to him leaving. It was a much needed win for fans, who are tired of seeing their team on the news for all the wrong reasons, including a loss to the previously 0-8 Tampa Bay Buccaneers a week before.

And, it was a much needed win for the playoff race.

Quarterback Ryan Tannehill had a good performance on Sunday, going 22-for-35 for 268 yards, with a touchdown and an interception, and was sacked four times. He ended the game with an 84.0 passer rating. It was a performance good enough to beat the Chargers on Sunday, but it was also inconsistent, with Tannehill missing some open thrown, and maddeningly continue his habit of underthrowing the deep ball to Mike Wallace. There are still things that have to be worked on, but overall, it was a good performance for Tannehill.

Maybe the player of the game, though, was tight end Charles Clay, who caught six passes, tying his career high, for 90 yards and a touchdown. That score came on a four-yard pass from Tannehill midway through the third quarter. Clay then ran through three Chargers defenders, including crushing safety Marcus Gilchrist, and wound his way into the endzone. 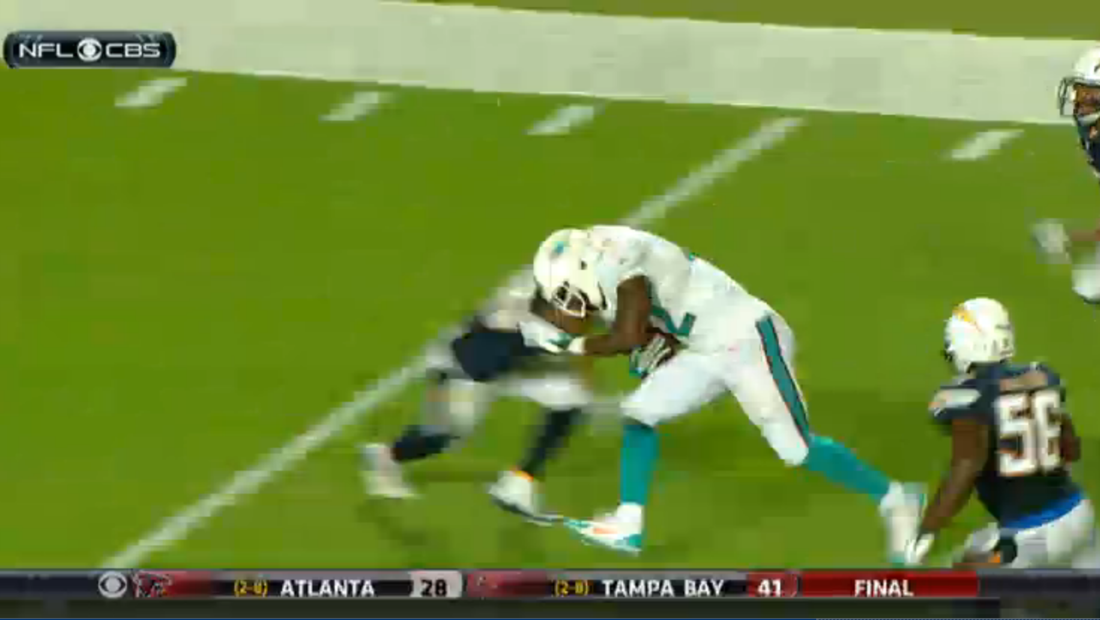 "It was huge," Tannehill said when asked about the touchdown play after the game. "I saw a void, threw it to him in the opening and never thought it was going to be a 39-yard touchdown. He's a tough runner, big physical guy who showed his physicalness and toughness getting in the endzone." 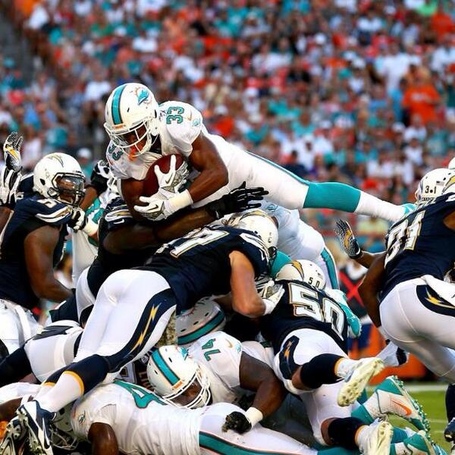 Although Clay was clearly had the biggest impact for the offense on the day, it wasn't just Clay. Running back Daniel Thomas carried the ball 10 times against the Chargers, running for 57 yards and a touchdown. His 5.7 yards per carry average was his highest of the season, and he was clearly the hot runner on the day. His running mate, Lamar Miller, added 17 yards on four carries, giving him a 4.3 yards per carry average. The Dolphins as a team ran for 104 yards on the day, surpassing their season per game rushing average by nearly 20 yards.

Like Tannehill, the Miami defense played well, but had issues too. The run defense, which is supposed to be the strength of the team, gave up 154 rushing yards, on a 5.9 yards per carry average. However, they also did enough to win on the day. Cornerback Brent Grimes came away with a big interception as the Chargers were looking to answer Miami's opening possession field goal. Chargers quarterback Philip Rivers threw a deep pass down the right side of the field, looking for Vincent Brown only to have Grimes comes away with the ball, ending that threat from the Chargers.

But, Grimes wan't done making plays as the Chargers threw the ball deep and tried to answer a Miami score. On the last play of the game, Rivers again threw deep down the right side of the field, again looking for Brown. This time, Grimes simply batted the ball down, away from Brown, in the endzone, sealing the Miami victory. 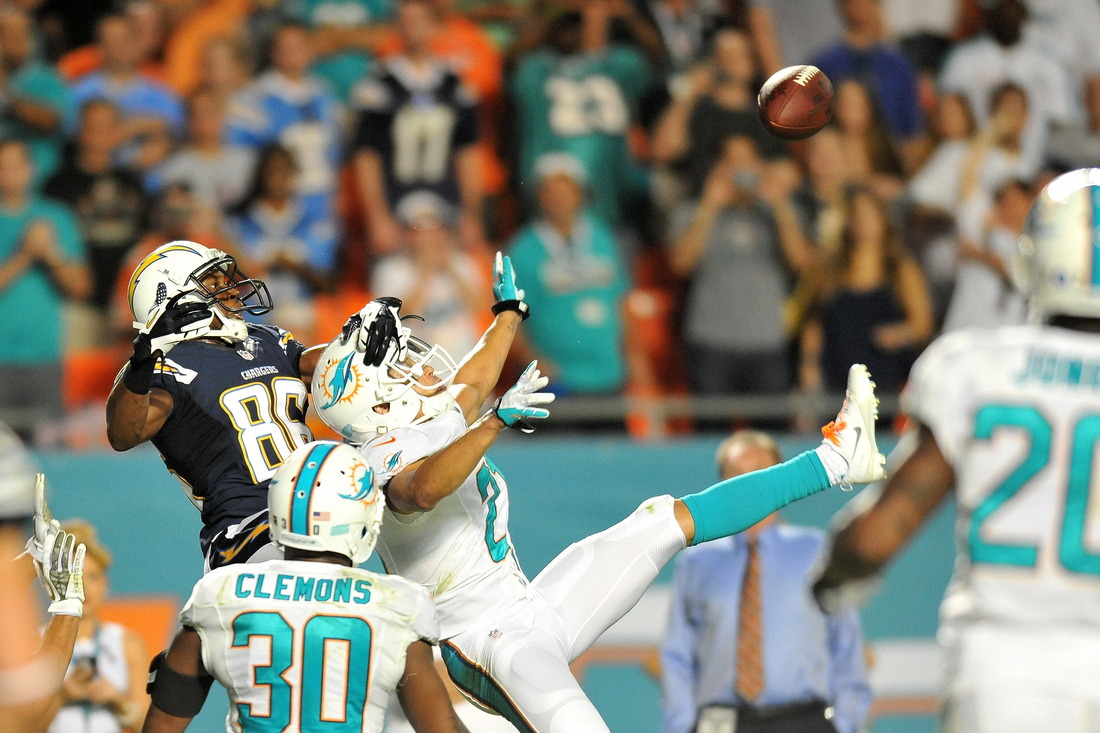 Defensive end Olivier Vernon put his own stamp on the game as well, when, as the Chargers were looking to score midway through the fourth quarter, with a touchdown able to put San Diego in the lead, vernon came around the corner and got a huge sack on Rivers. The loss of yards put the Chargers out of field goal range, and forced them to punt. Miami would take two minutes off the clock before punting the ball back to San Diego for their final drive, ending with the Grimes deflection.

Other defensive linemen also had some big moments in the game. Early in the fourth quarter, leading by one at 17-16, the Dolphins went three and out, and it looked like the team could be in trouble. Instead, after a four yard run on first down, the Chargers again tried to go to the ground on second-and-six from their 21 yard line. Instead of gaining ground up the middle, and planned, Ryan Matthews was forced to bounce outside where defensive end Cameron Wake tackle him for a five yard loss.

The next play, facing 3rd-and-11, Rivers dropped back to pass, only to be sacked by defensive tackle Jared Odrick, forcing the Chargers into their own three-and-out. Wake would add a sack of his own on the final Chargers possession, forcing them to use their final timeout.

Vernon tied for the team lead in tackles with linebacker Philip Wheeler. 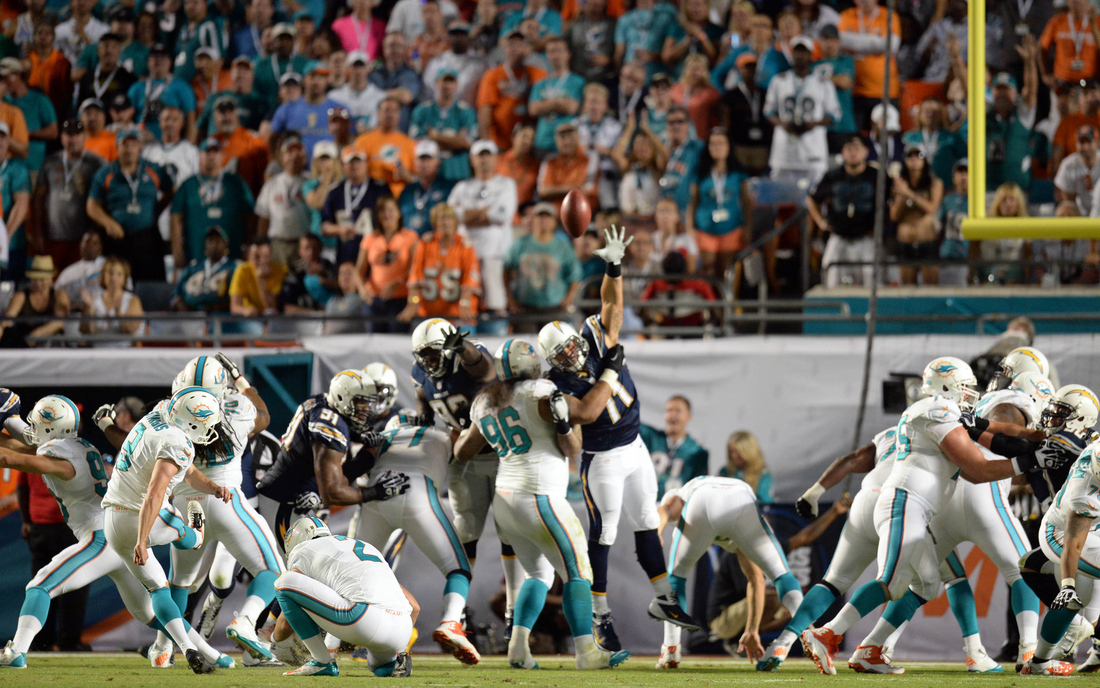 The Dolphins offensive line, which did allow the four sacks but seemed to block better on Sunday, also played well enough to get recognition. With 60-percent of the offensive line different than just a couple of weeks ago, Miami's pass-protection and run-blocking should have been a mess. Instead, they somehow came together and played like a unit. Starting for the first time at center, Nate Ganer moved over from the left guard position he had played last week, filling in for an ill Mike Pouncey. To replace Garner at the guard spot, the team promoted Sam Brenner off the practice squad, sliding him in as a starter. At left guard, Bryant McKinnie continues to play well, despite having only joined the team four weeks ago, while Tyson Clabo was again at right tackle, filling in the spot once meant for Jonathan Martin. Oddly, the longest tenured offensive lineman this year, John Jerry, who has played every snap at right guard, had two false-start penalties during the game.

Keep up with all of our Miami Dolphins Coverage

Reserve guard Danny Watkins saw a few snaps, making his Dolphins debut. Reserve tackle Dallas Thomas, the rookie third round pick for Miami this year, saw playing time as a sixth offensive lineman, filling the role previously held by Will Yeatman, who tore his ACL this week. It was the first playing time of Thomas' career.

Miami's win moves them back up to .500 on the season, with a 5-5 record, and into a tie with the New York Jets for the second position in the AFC East and the sixth seed in the playoffs. Currently, the Jets have the tie breaker on the Dolphins, based on their 2-2 division record while Miami has an 0-2 record. However, the two teams have not yet faced each other, meaning Miami can still reclaim the tie breaker. The Dolphins visit the Jets in Week 13, while the Jets head south to Miami in Week 17.

Coming off this win, the Dolphins will look to back it up when they host the Carolina Panthers next Sunday. Carolina has won their last five games, leading into tonight's Monday Night Football match-up with the New England Patriots.