The Miami Dolphins and Tampa Bay Buccaneers ended the NFL's Week 10 schedule with a Monday Night Football meeting. Today, we take a look back at the Dolphins' loss through the defensive snaps counts fot Miami. 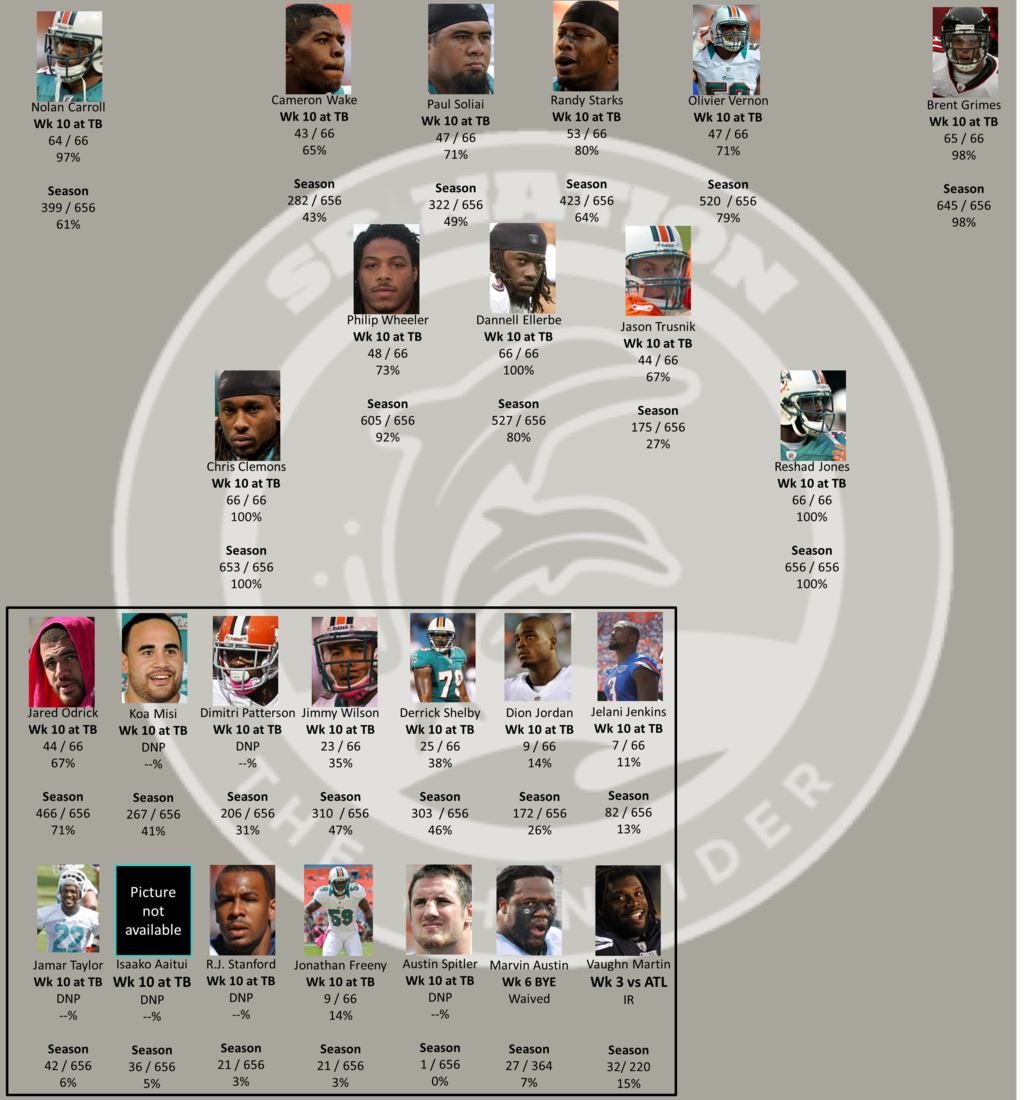 The Miami Dolphins lost to the Tampa Bay Buccaneers on Monday Night Football this past week. Earlier, we took a look at the Dolphins' offensive snap counts from the game, and now we turn to the defensive players.

The defensive line is the largest source of controversy for the defense, with no one really understanding the rotation the team is using, including repeated situations were All Pro defensive end Cameron Wake and third overall draft choice Dion Jordan continue to stand on the sidelines. Asked about Jodan's lack of use this week, defensive coordinator Kevin Coyle explained:

"Dion (Jordan) is not going to be in there in games where teams are slugging it out running the football. This team threw the ball 21 times in the game, and he was in there for half of them in the rotation that he’s playing in right now. If teams are going to be featuring certain personnel and running the football on first and second down, that’s not Dion’s (Jordan) strength at this point in his time here with us. That’s not going to change this season."

That does make some sense, given Jordan is not the best against the run right now, but on 21 pass attempts, Jordan played nine snaps. Seems like the team could at least find a few more snaps to get Jordan involved.

Wake, meanwhile, played 43 of the 66 defensive plays Monday night, but seemed to always be out of the game on key passing downs. Olivier Vernon, starting opposite Wake, played 47 snaps. Starting at defensive tackle were Randy Starks, who played 53 snaps, and Paul Soliai, on the field 47 times.

Joining Jordan as players coming off the bench for the offensive line, defensive tackle Jared Odrick played 44 snaps, and did line up at defensive end occassionally. Defensive end Derrick Shelby got on the field 25 times.

The Miami secondarywas also without a key player, in this case cornerback Dimitri Patterson, who normally starts opposite Brent Grimes, who played all but one of the 66 defensive plays on Monday. Instead of Patterson, Nolan Carroll got the start and played 64 of the 66 plays. Safety Jimmy Wilson remains the team's nickel cornerback, playing 23 times while rookie Jamar Taylor and R.J. Stanford did not make an appearance. The safeties, Chris Clemons and Reshad Jones, both played all 66 snaps.