With the NFL's Week 10 slate complete following last night's Monday Night Football game, we can now take a look at the current playoff standings in the AFC. 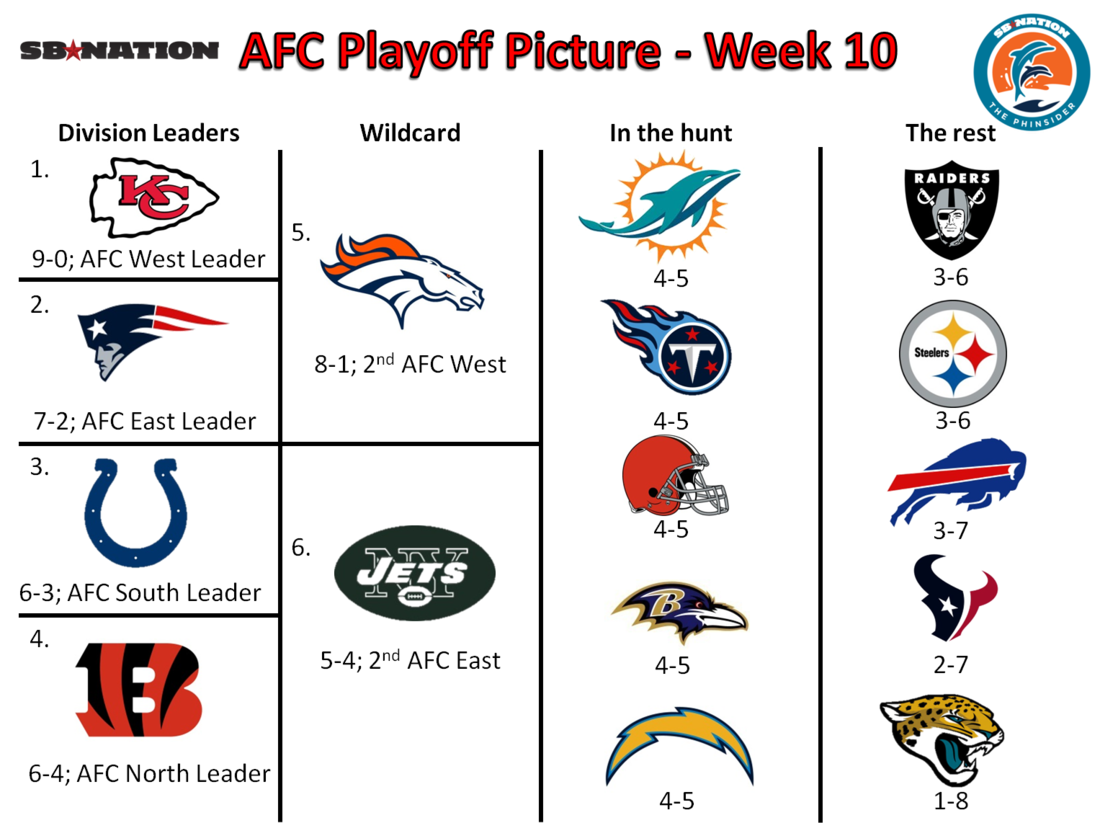 The 2013 NFL Playoff picture changed little this week, as three of the top six teams were on a bye, and all six current playofs teams remaining the same. Behind the final Wildcard slot are a mess of teams one game below .500, and just one game out of the Playoffs.

The only undefeated team in the league, the Kansas City Chiefs, would claim the top spot if the Playoffs were to start today. Behind them, the AFC East leading New England Patriots have the second position with a 7-2 record, followed by the AFC South leading Indianapolis Colts (6-3) and the Cincinnati Bengals, leading the AFC North at 6-4.

Currently, the Wildcard slots are being held by the 8-1 Denver Broncos, the AFC West's second place team, and the 5-4 New York Jets, currently second in the AFC East.

The top seed and fifth seed spots could flip after Week 11 as the Chiefs and Broncos face off for the first of their two annual meetings.

The next five teams, our "In the hunt" category, features all 4-5 teams, headed by the Miami Dolphins. Behind them, the Tennessee Titans, Cleveland Browns, Baltimore Ravens, and Dan Diego Chargers take spots eight through eleven.

As for the Dolphins' playoff chances, despite how bad the team looked Monday night, and how bad we all feel about this team right now, they are still just one game out of the Playoffs and are in the seventh spot, having the tie breakers over all the 4-5 teams right now. They also still have to play the Jets twice, meaning the Playoffs are still a possibility, no matter how bad things have looked.

If they are going to make that run, however, they have to fix things and fix things fast. The team isn't dead yet, but another performance like last night, and they may as well be.