The Miami Dolphins lost to the New England Patriots yesterday in a very disappointing contest. We take a look back at the loss through the snap counts for the Dolphins today, starting with the offense. 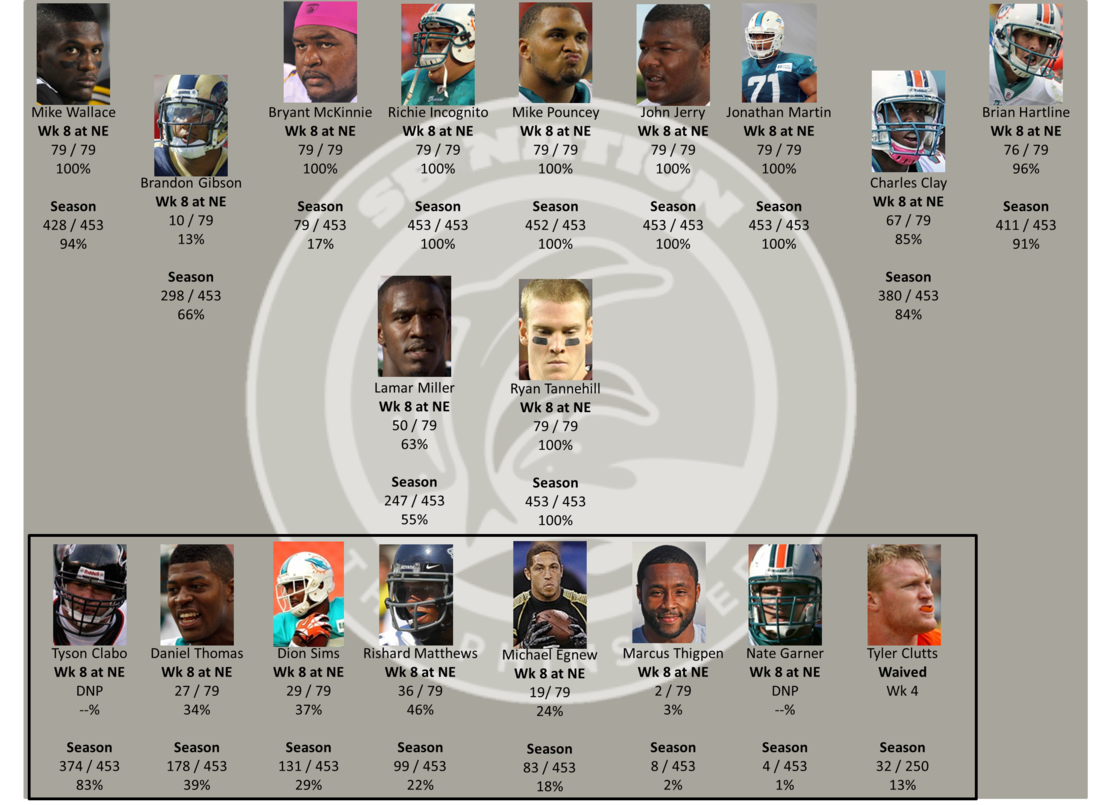 The Miami Dolphins dropped a game they dominated in the first half yesterday, losing 27-14 to the New England Patriots.  The loss sent the Dolphins to a game under .500, and extended their losing streak to four games.  As we work our way through the disappointment and try to get ready for a Thursday Night Football game this week, we take a look today at the snap counts for the Dolphins, starting with the offense.

Once again, the offensive line played every snap in the game, this week 79 of them.  The difference, of course, was the re-worked offensive line, with Bryant McKinnie sliding into the left tackle position and Jonathan Martin moving across the line to right tackle.  In the middle, Richie Incognito, Mike Pouncey, and John Jerry remaining on the inside.

Quarterback Ryan Tannehill likewise played all 79 snaps this week, as did wide receiver Mike Wallace, the first time he has been out there for every snap.  Brian Hartline played 76 of the 79 snaps, while Rishard Matthews took 36 snaps.  Of course, Matthews' jump came at the cost of Brandon Gibson, who was lost for the season with a knee injury, after playing 10 snaps in the game.

Tight end Charles Clay took 67 snaps, or 85% of the offensive plays, while Dion Sims took 29.  Maybe one of the most interesting uses of players this week was Michael Egnew, who repeatedly played fullback, and was effective as a lead blocker.  Egnew made 19 appearances during the game.

At running back, Lamar Miller took 50 of the snaps, meaning he played 63% of the plays.  Daniel Thomas appeared in 27 plays, and Marcus Thigpen had two offensive plays this week.

Tyson Clabo and Nate Garner did not appear.

With Clabo sitting on the bench, Tannehill, Incognito, Jerry, and Martin are the only players to have played every snap this season.