The Miami Dolphins dropped a disappointing game this past weekend to the Buffalo Bills. In our final look back at the game, we take a look at the snap counts for Miami from the game, concluding this afternoon with the defense. 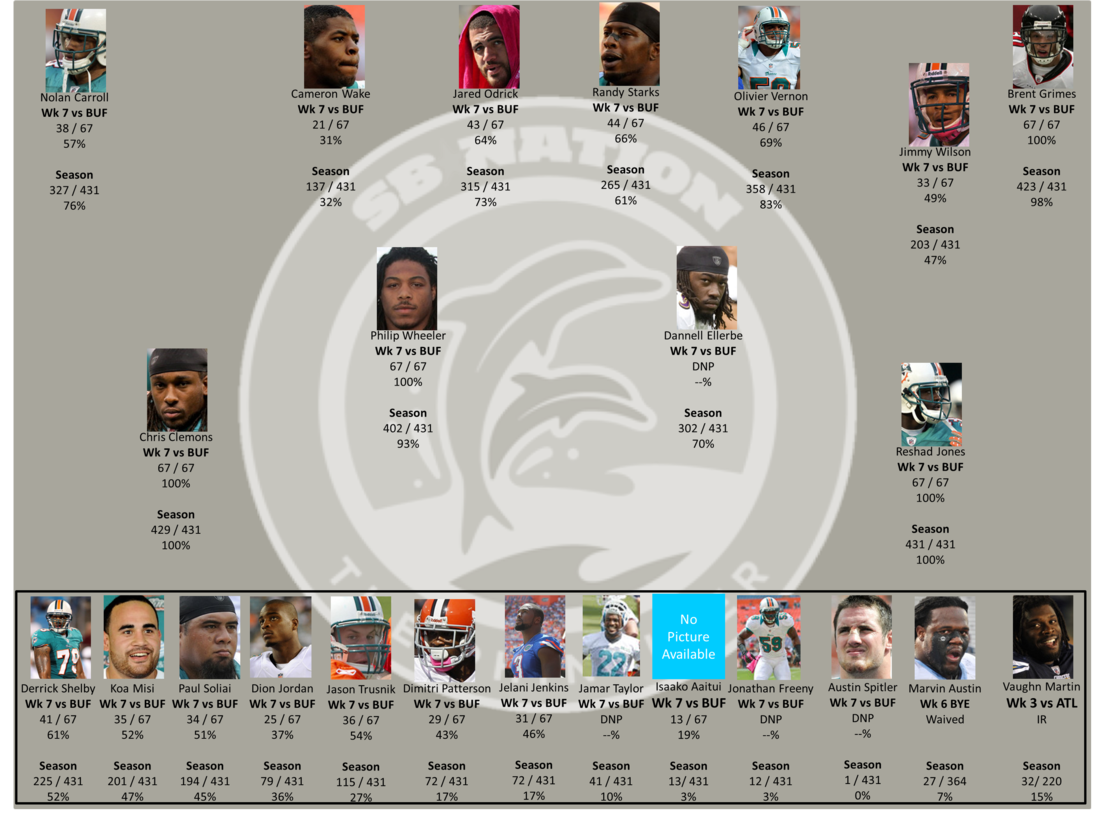 Earlier today, we took a look at the Miami Dolphins' offensive snap counts from their disappointing loss to the Buffalo Bills. While we are all getting ready to switch our attention to the New England Patriots coming up this weekend, we do need to take one last look back at the Bills game, this time with the defensive snap counts.

Four players took all 67 snaps for Miami this past weekend, safeties Chris Clemons and Reshad Jones, linebacker Philip Wheeler, and cornerback Brent Grimes. Jones has yet to miss a snap this year, while all four of them have played at least 93% of the snaps for the defense, with Grimes at 98% and Clemons, statistically, at 100%.

Along the defensive line, Olivier Vernon took the most snaps, with 49 played this week. After him, defensive tackles Randy Starks and Jared Odrick played 44 and 43 snaps, respectively. Then, starting defensive end Cameron Wake only played 21 of the 67 snaps, with the team clearly looking to bring him back slowly after nearly a month off from the game with a sprained MCL in his knee. Reserve defensive ends Derrick Shelby (41 snaps) and Dion Jordan (25) both saw their play time increase with the limited play from Wake. Paul Soliai, who started alongside Starks at defensive tackle, took 34 snaps, playing just over half the game. Also along the defensive line, Isaako Aaitui made his NFL debut, playing 19 snaps. Aaitui signed as an undrafted rookie with the Dolphins during the 2011 season, staying on the practice squad throughout the season, then was back with the team during training cap and the preseason in 2012 before being released, with the Dolphins intending to re-sign him to the practice squad before the New York Jets claimed him. However, he tore his ACL in his first practice with the Jets, losing the 2012 season. After spending this preseason with the New Orleans Saints, Aaitui was then signed to the Dolphins practice squad this year when Soliai got injured early in the season, and worked his way up to activated, and playing, this past Sunday.

Joining Wheeler at linebacker this week were Koa Misi (35 snaps), Jason Trusnik (36), and Jelani Jenkins (31). Trusnik got the start after middle linebacker Dannell Ellerbe was listed as inactive due to the shoulder injury he sustained during Miami's Week 5 loss to the Baltimore Ravens.

At cornerback, Grimes was joined by Nolan Carroll, who held on to his starting position despite the availability of Dimitri Patterson this week. Carroll played 38 of the 67 snaps, while Patterson, who had not played since Week 1 as he rehabbed a groin injury, played 29 snaps. Jimmy Wilson continued to work as a cornerback as well, playing 33 snaps.

Just like with the offense, there were not any shocking surprises. Maybe a couple of things stand out, like exactly how limited Wake was, or that Jamar Taylor did not make a defensive appearance in the game (though he did play 10 special teams snaps).

Anything stand out to you?