The Miami Dolphins dropped a disappointing game this past weekend to the Buffalo Bills. In our final look back at the game, we take a look at the snap counts for Miami from the game, starting with the offense. 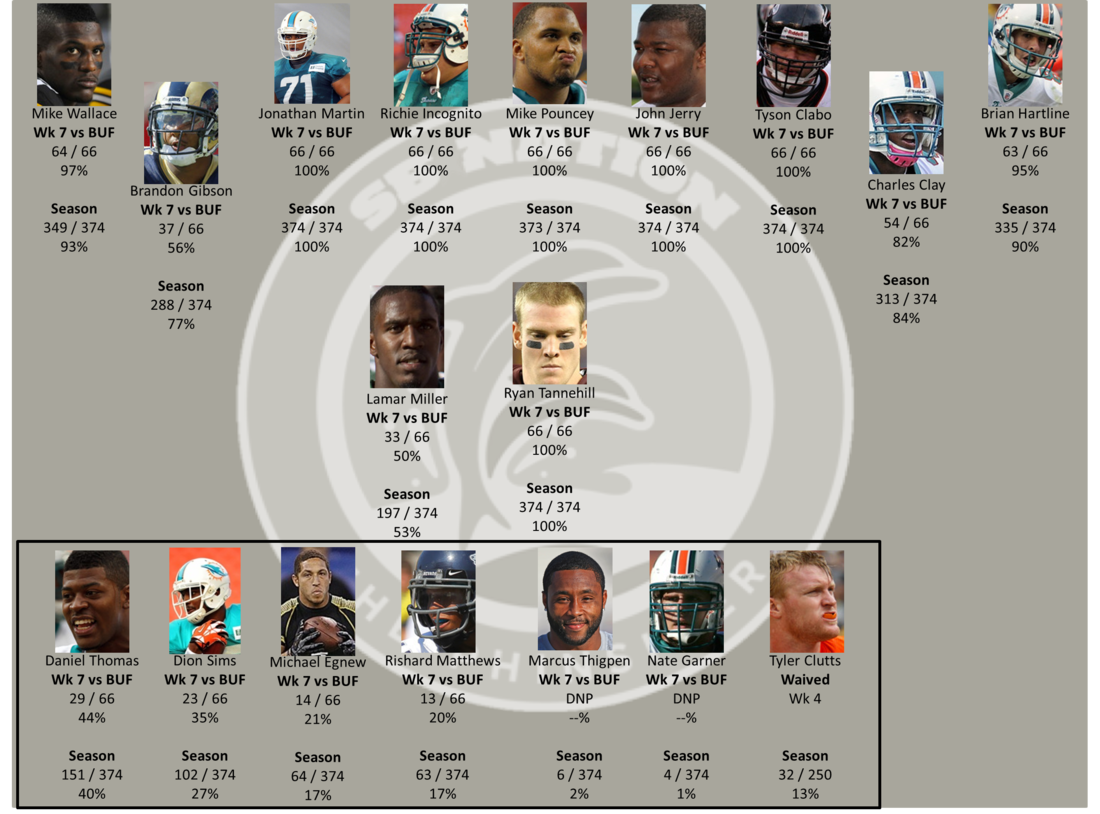 The Miami Dolphins lost a game they could have won this past weekend when they gave up a one point lead in the fourth quarter to the Buffalo Bills. While we all are getting ready to turn our attention to a second straight AFC East division rival this weekend when the Dolphins head north to face the New England Patriots, we do need to take one last look at the Bills game, tracking the snap counts for the Dolphins players. We start this morning with the offense, while the defense will be posted this afternoon.

As usual, six played took every offensive snap for the Dolphins: quarterback Ryan Tannehill, left tackle Jonathan Martin, left guard Richie Incognito, center Mike Pouncey, right guard John Jerry, and right tackle Tyson Clabo. With the trade for Bryant McKinnie this week, it looks like a much needed shakeup to the linemen is coming, so we will have to wait and see what happens to the playing time for someone like Clabo over the last 10 games this year.

Wide receiver Mike Wallace played all but two snaps this week, while Brian Hartline missed three snaps. Both receivers have now played at least 90% of the offensive snaps this year. Third receiver Brandon Gibson played 56% of the game this weekend, but had the biggest impact with his two touchdown receptions, the first two TD performance from a receiver since Marty Booker in 2006. Reserve receiver Rishard Matthews played just 13 snaps against the Bills.

Tight end Charles Clay took 54 of the 66 offensive snaps this week, catching one pass but making it count with a touchdown - his third straight game with a TD reception. Reserve tight ends Dion Sims and Michael Egnew both got credit for the start this week, as the Dolphins opened in a two tight end set, with Clay off the field. Sims played 23 snaps while Egnew took 14 on the day.

At running back, Daniel Thomas started the game and had his best statistical game of the year, with 12 carries for 60 yards over his 29 snaps. Lamar Miller, meanwhile, played 33 snaps, getting nine carries for 43 yards. Asked about Thomas starting, head coach Joe Philbin returned to his preseason mantra, basically stating that both Thomas and Miller are capable of being the starter, than Thomas may have been in first, but Miller took more snaps, and he pointed to the 12 to 9 ratio as basically an even number of carries. He still said Miller was the starter, but it happened to be that the first plays were a package for Thomas.

Nothing was overly surprising during the game, at least in terms of snap counts. Maybe the one thing that I was hoping to see, but it never happened, was Marcus Thigpen taking offensive snaps. At some point, hopefully, the return man will once again return to the offensive lineup and build on the six snaps he has this season.

How about you? Anything stand out?