Last Thursday, Mike Dee, the Miami Dolphins CEO, spoke with Joe Rose on 560 WQAM. The two talked about the new stadium renovation plan, as well as taking calls from fans. One of the major topics covered during the fan calls was the new logo the Dolphins will have in 2013.

Last Thursday, Miami Dolphins CEO Mike Dee appeared with Joe Rose on 560 WQAM, where the two talked about the new stadium proposal as well as took calls from fans. One of the main topics that came up while taking fan calls was the new logo the Dolphins will have in 2013.

Dee explained that the process to redesign the logo started about two years ago, with season ticket holders and other fans polled on their feeling about the current logo. Overwhelming, Dee said, fans expressed displeasure with the current logo, preferring something more along the lines of the 1960s and 1970s logos, rather than the 1997 "cartoon" logo the team currently uses. Dee stated that a lot of people believe the Dolphins have only ever had one logo, despite the team having had three logos already in the 46 history of the franchise.

When Rose asked Dee why they are making the logo change now, Dee explained that the process started when Stephen Ross and Mike Dee first came to the Dolphins organization. He said fans were constantly expressing a desire to see the logo changed, describing it as "tired and cartoonish." Dee continued, saying that they slowed the process down during the lockout and then with the switch of NFL uniform manufacturers from Reebok to Nike, which took place before this season.

Dee explained that the logo change "in some peoples' eyes will be slight, and in other peoples' eyes, will probably be more significant." He continued to explain, "The fundamental components of the logo won't change: the sun, the dolphin. There's going to be a look back at history, in terms of some of the elements of it, and a look ahead at the future in terms of others."

One of the questions led Dee to state that the "leaked" logo that was seen all over the place, including here on the Phinsider, is not the new logo. That logo, which you can see below, was thought to be one of the final drafts of the possible logo, but that now appears to not be true. Dee also said that there have been around 200 "proposed" logos, which simply tells him how engaged the fan base for the team is.

The Dolphins are expected to unveil the new logo sometime before the NFL Draft in April.

The "leaked" logo, which Dee denied is the new logo: 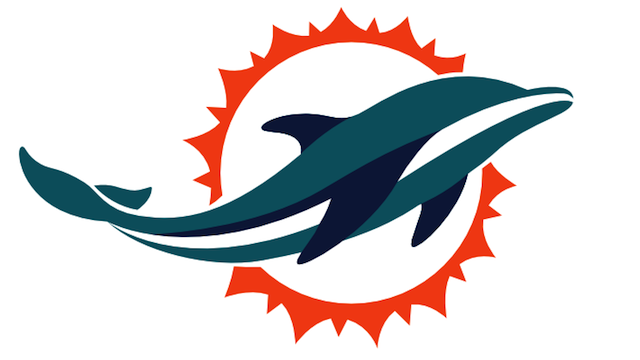