With the first deadline on the way to free agency come and gone with yesterday's franchise tag cutoff, the NFL is slightly different today than it was yesterday. With that in mind, NFL.com's Bucky Brooks has updated his mock draft.

Buck Brooks from NFL.com took a look at all of the franchise tags handed out yesterday, using it as a catalyst to update his 2013 NFL Mock Draft. Included in those franchise tags is Kansas City Chiefs offensive tackle Branden Albert, meaning the Chiefs will be looking at some other position with the first overall pick, right?

Wrong. At least according to Brooks, the Chiefs will be going straight to the tackle position, selecting Central Michigan's Eric Fisher. Explaining the pick, Brooks writes: 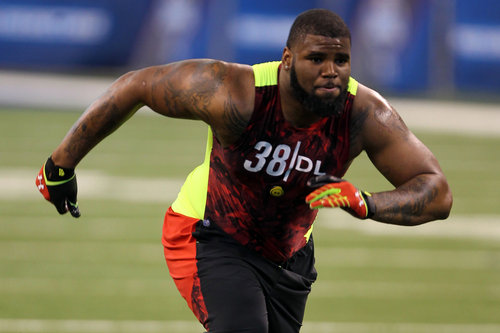 The Phinsider Mock Draft database makes its return after a couple of weeks off today. Here's a post NFL Combine look at who the Miami Dolphins should pick, according to the internet, as well as what position they should target in the first round.

Andy Reid is poised to orchestrate a quick turnaround in Kansas City, between the pending arrival of Alex Smith and the securing of Dwayne Bowe and Branden Albert. With the freedom to take the best player on the board, the Chiefs could add the most athletic offensive tackle in the draft to solidify the edges of the O-line. Fisher has been flying up the charts following strong performances at the Senior Bowl and NFL Scouting Combine; scouts have been raving about his combination of size, strength and athleticism as a potential star at left or right tackle.

Looks like the Chiefs will be set along the offensive line this year, if Brooks is correct. (In an interesting side note, Brooks still had to update his Chiefs pick. He had West Virginia quarterback Geno Smith to the Chiefs in his February 20 Mock Draft. The Chiefs are going to trade for Alex Smith on March 12.)

While most mock drafts and big boards have Fisher as the second highest tackle, Brooks elects to have him go first, with Texas A&M tackle Luke Joeckel following with the second pick to the Jacksonville Jaguars.

The first quarterback off the board is still Smith, but now he drops to third to the Oakland Raiders. That give Oregon defensive end Dion Jordan to the Philadelphia Eagles at four, followed by Alabama cornerback Dee Milliner at five.

As for the Miami Dolphins with the twelfth overall pick, Brooks still sees the team addressing the cornerback position, as he did in his previous projection. However, with Milliner now off the board, Brooks has the Dolphins selecting Florida State's Xavier Rhodes. Of the pick, Brooks writes:

The potential loss of Sean Smith could lead GM Jeff Ireland to nab the top bump-and-run corner in the draft. Rhodes will need some time to learn the finer points of playing the position, but it would be hard to bypass an explosive athlete with his kind of range and length.

Of course, just as things changed this week with the franchise tags and the Smith trade, expect everything to change again next week, when free agency kicks off.