It's always dangerous to publish a mock draft on the eve of the NFL's free agency period. You can be assured that, within 24 hours, everything is going to change. However, Dan Kadar from SB Nation's Mocking the Draft did just that today, updating his projection of April's NFL Draft.

The NFL's 2013 Free Agency period starts tomorrow, but that doesn't mean people aren't looking at the NFL Draft in April still. Despite the fact that everything will change tomorrow once free agency starts, Dan Kadar, from SB Nation's Mocking the Draft, has updated his 2012 NFL Mock Draft today. 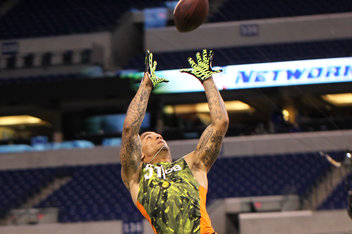 The Phinsider Mock Draft database has been updated. Here's a post NFL Combine look at who the Miami Dolphins should pick, according to the internet, as well as what position they should target in the first round.

Last week, the Kansas City Chiefs placed the franchise tag on offensive tackle Brandon Albert. With that move, many mock drafts started to turn away from the idea of the Chiefs using the top overall selection to grab a tackle. Then, the team released right tackle Eric Winston, and the tackle position was right back on the table. Kadar sees the team using that top spot to grab Texas A&M tackle Luke Joeckel. But, does it make any sense to use the number one overall pick to grab a right tackle? Kadar thinks so, since it may be for only a year:

After franchising left tackle Brandon Albert, it looked like the Chiefs may not have a use for an offensive tackle with the first overall pick. But then they released Eric Winston. A right tackle with the first overall pick? For now, yes. Unless Albert signs a long-term deal, there's nothing to say he won't be one and out in Kansas City and Joeckel would move to the left side.

Kadar has many familiar names in the top five, although the order of their selection is a little different. With the second pick, the Jacksonville Jaguars will take LSU linebacker Barkevious Mingo, according to the projection, followed by Florida defensive tackle Sharrif Floyd to the Oakland Raiders, Central Michigan offensive tackle Eric Fisher to the Philadelphia Eagles, and BYU defensive end Ezekiel Ansah to the Detroit Lions.

For the Miami Dolphins, Kadar has them selecting Alabama cornerback Dee Milliner with the twelfth overall pick. Kadar explains:

It's looking more and more likely the Dolphins will address the wide receiver position through free agency. If they do, adding a cornerback to replace Sean Smith is essential. Getting the best player at his position would be quite the coup for the Dolphins if they keep the 12th pick.

Personally, you guys know I am big on Milliner, and if he is there with the 12th pick, I think you have to take him. But, what do you guys think. Is he the right pick? Would you go a different direction? Is there any chance Milliner slips this far?

Let us know in the comments, and check out the entire 2013 NFL Mock Draft on Mocking the Draft,