For the second time this week, Mocking the Draft published a new 2013 NFL Mock Draft. This time, Dan Kadar gets back into the act after spending a week at the NFL Combine. Here's the rundown of Kadar's most recent projection.

SB Nation's Mocking the Draft has posted their second 2013 NFL Mock Draft of the week, this time with Dan Kadar authoring the projection. Kadar spent the past week in Indianapolis at the NFL Scouting Combine, watching the draft hopefuls run around the floor of Lucas Oil Stadium. After getting a first hand look at the players, here's Kadar's prediction of the first round.

PFF's Performance Based Values for Dolphins 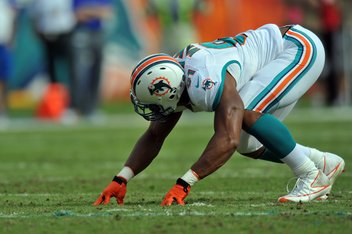 Pro Football Focus released their Performance Based Value for the Miami Dolphins this week. Calculating the difference in a player's salary versus what their performance was, PFF lists the top ten undervalued and the bottom ten overpaid players.

Kadar keeps the current favorite for the top pick, Texas A&M offensive tackle Luke Joeckel, going to the Kansas City Chiefs with the first overall selection. The second pick then send West Virginia quarterback Geno Smith to the Jacksonville Jaguars, a pick that seems to be gathering steam lately.

Despite no wide receivers being selected before the Miami Dolphins' pick with the 12th overall selection, Kadar joins the growing swell of mock drafts that have the Dolphins addressing the defense. Kadar projects the Dolphins to pick Florida State cornerback Xavier Rhodes. Writing about the pick, Kadar states:

"At 6'2 and running a 4.42 40, Rhodes just looks like a Miami cornerback. With Sean Smith possibly on his way out, the Dolphins' need for a quality cornerback is high and Rhodes is a solid value. We've often associated the Dolphins with a wide receiver, but there are cracks in each of the top players at the position."

By the end of the first round, Kadar only sees to wide outs selected, Tennessee's Cordarrelle Patterson going to the Minnesota Vikings with the 23rd pick and Clemson's DeAndre Hopkins headed to the New England Patriots with the 29th selection.

That would be great news for the Dolphins, who could be looking to use one of their second round picks on a wide out.

What do you think of the pick for the Dolphins? Check out the entire mock over on Mocking the draft.