Dolphins at Texans: Where to Watch, How to Watch, and What to Watch

Share All sharing options for: Dolphins at Texans: Where to Watch, How to Watch, and What to Watch

The Miami Dolphins will face the Houston Texans in just a few hours, setting team history with the first offensive snap of the game. The moment Ryan Tannehill takes that ball from center Mike Pouncey, Tannehill will be the first rookie quarterback to start the Dolphins' Week 1 game. That's something Dan Marino and Bob Griese, the team's two Hall of Fame quarterbacks, never did. Tannehill will make franchise history - so where can you see it happen? 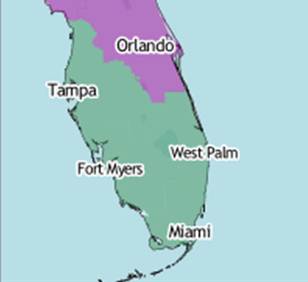 According to The506.com, the Dolphins game will be seen throughout all of Texas, and in parts of Louisana, Arkansas, Oklahoma, and New Mexico. The Mobile, Alabama market will also pick up the Miami game, to include parts of Mississippi and the Florida panhandle. Of course, the area that most Miami fans care about is the Florida coverage of the game. Along the west coast of Florida, the coverage will begin just south of Gaineville, while central and eastern Florida starts south of Orlando and Melbourne.

Obviously, CBS is going to be the place to watch this week in the markets, but, outside of the green areas in Florida, or every where else in the country, DirectTV's NFL Sunday Ticket package will air the game on channel 709.

If you want to catch the radio broadcast, with Jimmy Cefalo, Joe Rose, and Griese, it will be on BIG 105.9 FM in the Miami area, and across the Miami Dolphins Radio Network throughout Florida. You can also listen to the game on MiamiDolphins.com.

1. Ryan Tannehill - The Houston defense is going to harass the rookie all day; they finished last year as the number two defense for a reason. It's going to be important for the Dolphins that Tannehill keep his head, learn from his mistakes, and not let his nerves get to him.

2. Wide Receivers - The ugly state of the Miami receiving corps was a story all preseason, and will continue into the regular season, unless someone is able to step up, and step up soon. Right now, Davone Bess is the only receiver who is a known commodity. Behind him, Brian Hartline and Anthony Armstrong are looking to make an impact with the Dolphins, despite missing the preseason due to injury (Hartline) and being with the Redskins (Armstrong). Legedu Naanee, Marlon Moore, and Rishard Matthews have to perform better in games that count than the did in the exhibition series.

3. Dolphins secondary vs. Houston's wide receivers - The Miami secondary is being thrown into the fire today, facing Andre Johnson, Kevin Walter, and the rest of the Texans' passing game. With only four cornerbacks on the roster (five if you count safety Jimmy Wilson), it could be a really long day for Sean Smith, Richard Marshall, Nolan Carroll, and R.J. Stanford.

"We're certainly going to attempt to win some games right away (laughing). I'm not sure where we fit on the spectrum in your spectrum. I think, what's that show, Any Given Sunday? I absolutely believe that's the case. Again, that's part of the thing that gets a coach, sometimes it doesn't help you sleep at night, but it helps you wake up in the morning and that challenge and that fun... We don't really know. I've never really been good at the prediction game. Never spent a lot of time worrying about it, but that's kind of the great part about what our job is. The other part, as I've said to our team, it's one thing where you are day one and it's another thing where you are when the thing is kind of heading to the end and that's me goose bumps. That's what gets me going and gets me excited about being in this profession. But I do believe it can happen, yeah." - Dolphins Head Coach Joe Philbin on if he thinks the NFL is still set up for parity (9/6/12)

"Arian's (Foster) just got a sore knee. I don't know if it's just the wear and tear of camp or whatever. It got real sore on him. He feels better today. I think if we pushed him to practice today, he would have went out there and practiced. We're going to be smart with him, but we'll have to show us that he's ready to go. I think Brooks (Reed) is a probably a little bit more sore than Arian as far as going out on the field today. He is also optimistic that he'll be ready to go. We'll have to test them both. Probably could test Arian tomorrow maybe and test Brooks on Sunday morning so we'll see how it goes." - Texans Head Coach Gary Kubiak on Arian Foster and Brooks Reid injuries heading into the game (9/7/12)

"I'm looking forward to it. It's a big week for us as a team. It's a big week. Starting off the year, want to get things started off the right way. It's always great to go back to the home state." - Dolphins Quarterback Ryan Tannehill on returning to his home state of Texas