Well the season is mere DAYS underway and it is quite apparent that the overall excitement level is quite lower than usual for a season opener.

Last year's opener brought us a primetime match-up versus division rival New England, which ended in an extremely entertaining shootout for all NFL fans.

Jump to 2012, and the days before the opener, it feels more like a calm before the storm. And rightfully so, the Houston Texans are truly one of the top dogs in the conference ( and probably the league). On paper, this truly IS a David and Goliath story.

However, Houston is not perfect, and if the Dolphins excel in a few key areas they might FINALLY beat Houston for the first time in 7 attempts, and earn the upset of the week. Here are the keys to win:

I believe that there will be no more important player in this week's game for Miami, than Cameron Wake. As we all know, the best way to disrupt a team's entire offense is to provide pressure. We simply do not have the personnel to match up in man coverage against the Texans' aerial assault.

However, Miami does have a very big advantage in one area of the field; our best defensive player will be looking to feast on 7th round rookie Derek Newton, who is starting at right tackle. In an ideal situation, Cameron Wake will disrupt and pressure Schaub's blind side the entire game. The rookie, Newton, will most likely get TONS of help, but Miami's defensive line is talented enough to capitalize in a double team of Wake.

Here is where Miami NEEDS to play to their strengths... while Miami's best group is arguably their defensive line, Houston's offensive line is most likely their weakest area. Collapsing their line in the trenches will pressure Schaub, disrupt the chemistry in the rushing game and hopefully create big tackles for losses, sacks, and turnovers.

More than ever, in Tannehill's first start, winning the turnover battle and the battle for field position will almost be essential to walk out of Reliant Stadium with a W. It has been said that a team's best player will step up when needed, and we will certainly need #91 to have a big game for Miami.

-Hit them in the mouth, early.

As we saw in the season opener between the Cowboys and Giants, even talented first team offenses have the tendency to start slow. This can obviously be the case for Houston as well. They are getting back their starting QB and WR who missed a handful of games at the end of last year, who knows how that will affect their rhythm?

Miami might want to hope that Houston starts a bit rocky in the beginning of the game, to possibly allow Miami to accumulate an early lead. Simply put, if Houston comes out guns blazing from the whistle then Miami might be in for a long day.

Houston, when healthy, has one of the most dynamic offenses in football. They can beat you in a handful of ways- Arian Foster and Ben Tate make up the top 1,2 punch in the game, Andre Johnson is an enigma to cover, and they are strong in screens and tight end play as well. Pressuring Houston to some early three-and-outs may be Miami's best bet.

Since we play New England twice a year, we all know that the ONLY way to completely stop an ELITE offense them is to keep them off the field. Reggie Bush and Daniel Thomas will most likely be the most important players on the offensive side of the ball come Sunday. We need to establish a sound running game against one of the best defenses in the game.

It won't be easy, but the west coast offense is probably the best way to attack; slowly chipping away at the other team will tire them out and open up potential for bigger plays.

An ideal situation for the Dolphins to have a shot is for Ryan Tannehill to have to do as little as possible. He will need to be efficient (a perfect Tannehill line in my eyes: 20/28, 225 yards, 42 yards rushing, 2 TD/0 INT) but it will be almost impossible to win a shootout on the road against this team with a rookie QB and our wide receiving core.

Long, sustained drives will help with Tannehill's confidence and leaving him with a 3rd and 3, rather than a 3rd and 15, will help his rhythm and help limit forcing throws and possibly creating turnovers.

So much for the idea that moving kickoffs up 5 yards is going to essentially eliminate the return game; last year's opening week 1 presented us with eight, yes EIGHT (5 punt, 3 kickoffs), returns for scores! This shows that special teams is one of the most important aspects of a week 1 game plan, and one that often gets overlooked.

As we all know by Miami's win over the Jets a few years back, we can control a game despite an awful offensive performance with solid defense and an awesome punter. Brandon Fields continues to shine, and continuing to pin the Texans in their own endzone can seriously hinder their performance.

Kicker, Dan Carpenter, will most likely get a few opportunities of his own on Sunday, so he will have to take full advantage on putting points on the score board. The return game is VITAL however; all it will take is one big return from Houston to fire up the crowd and open up the floodgates. Discipline for our kick coverage to stay in their lanes and wrap up in their tackles can help to keep this game close.

A huge Miami kickoff or punt return will only help our field position and lessen the pressure for offense to have to try and too much. Lamar Miller or Marcus Thigpen, we can use your help guys! 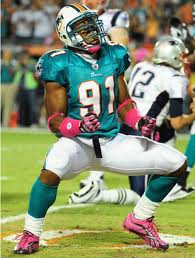 Looking to unleash the Wake week 1 (via t0.gstatic.com)

Obviously, we will have to play our "A" game and hope Houston starts flat with their "C" game to have a chance. Limiting mistakes are a no brainer as well as giving up big plays. Coughing up the ball and playing from behind are recipes for disaster in this matchup. The advantages we do have is that NOBODY knows what to expect from the 2012 Miami Dolphins (including all of us), and that uncertainty can definitely be played to our strength.

Opening up the playbook and confusing the Texan's defense may be a possibility for Mike Sherman's offense. Does anyone else remember two huge TD's from Patrick Cobbs (including a 53-yard fleaflicker from Chad Pennington followed by a 80-yard screen pass) stunning the Texans early at home in 2008? These big plays can quickly quiet the deafening opening day crowd in a dome and put the defense back on their heels.

Houston has a few young solid wide receivers, but they are about unproven as Miami's; I would rather double cover Andre Johnson and see if Keshawn Martin or a DeVeir Posey could beat you.

Whoever is in the backfield in Houston can essentially score on any play, so pushing back their line and stopping holes for Foster and Tate will be crucial. Our linebackers will have to keep them in their sights as well, watching screens and also making sure Owen Daniels doesn't slip by them.

Overall, I have a lot of respect for Houston as one of the ELITE in the AFC and Miami faces a very tough task Week 1. However Miami ALWAYS keeps it close in these games, and could play it to the wire by controlling the clock, scoring early, winning the special teams and turnover battle, and could pull one out with a good showing from Wake and Bush/Thomas. On paper, I think Miami will ultimately be on the losing battle of this one but I have seen crazier things happen, especially in week 1, when everyone is 0-0. In the words of Chris Berman...

"That's why we play the game."