Dolphins at Cardinals: Where to Watch, How to Watch, and What to Watch

Share All sharing options for: Dolphins at Cardinals: Where to Watch, How to Watch, and What to Watch

The Miami Dolphins head west this week to face the undefeated Arizona Cardinals in NFL Week 4 action. This game will mark the first time the Dolphins are out of the early Sunday afternoon game time slot. How can you catch the game? Of course, we have all the information you will need. 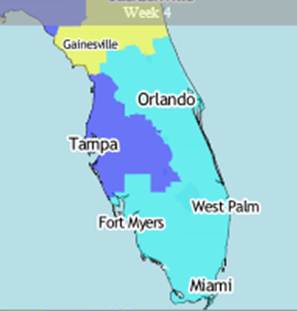 The television coverage this week is one of those strange times when CBS is airing the game, but does not have the double-header for the week. Of course, this means the Arizona and Miami markets will not get an early game on CBS this week (Miami will have Professional Bull Riding, instead). According to The506.com, the Dolphins and Cardinals will be seen throughout the majority of Arizona, as well as the Mobile, Alabama market. In Florida, the game will be seen everywhere south of Gainesville and Jacksonville, except in the Tampa market.

Obviously, CBS is going to be the place to watch this week in the markets, but, outside of the light blue area in Florida, or every where else in the country, DirectTV's NFL Sunday Ticket package will air the game on channel 711.

1. Miami Wide Receivers vs. Arizona Secondary - The Dolphins will have a tough time going up against one of the best cornerbacks in the league, second year player Patrick Peterson. However, they should be able to find space when throwing away from Peterson. Of course, that's assuming that the Dolphins' wide receivers come into this game playing like they did against the Oakland Raiders, and not like last week against the New York Jets.

2. Dolphins Defensive Line vs. Cardinals Offensive Line - On paper, the Dolphins should be able to dominate the Arizona offensive line. It will be interesting to see if they can actually accomplish that. Miami defensive end Cameron Wake has been dominant in the pass rush this season, so much so that he is the top ranked 4-3 defensive end in Pro Football Focus' positional rankings - and that's without having a single sack this year. Meanwhile, the Cardinals are graded as the worst pass blocking team in the league. Could Wake get onto the sacks leaderboard this week?

3. Miami Secondary vs. Arizona Receivers - Once again, the Dolphins secondary will have their hands full. This week it's Larry Fitzgerald, who Dolphins cornerback Sean Smith called one of the league's five best wide receivers this week. With cornerback Richard Marshall listed as questionable heading into the game, even though he is expected to play, the Dolphins will have to find creative ways to cover Fitzgerald to ensure Cardinals quarterback Kevin Kolb has to look elsewhere to move the ball down the field. And, with little-to-no rushing attack from the Cardinals offense, the passing game really is the only way they are going to try to move the ball. The Dolphins have to be ready for it.

"Very athletic on every level of the defense. They're good athletes; I think they are extremely well coached. Ray Horton has done an excellent job. Ron Aiken, who is a former colleague of mine, the defensive line coach I think is as good as there is; he's excellent. They're players are good; they're good athletes. They're playing fast and obviously you want to create schematic challenges for an offense, which clearly they do. Yet at the same time I think they have some confidence in their base defenses and they're going to line up, they're going to play and play it well. I think they're giving up 13 points per game, and I think that's pretty good proof in the pudding that they're doing some things well." - Miami Head Coach Joe Philbin on Arizona Cardinals Defense, 9/26/12

"I had a little experience with him many years ago when he spit in my face. I've never had a player or person in my life spit in my face. It took everything in my power to restrain myself because it was a really close game. I'm excited to see (him). Usually the players who do that are the non-athletic guys who can't block people, so they play dirty." - Arizona Cardinals Defensive End Nick Eason on Miami Guard Richie Incognito Being a Dirty Player, 9/28/12

Related: Cardinals at Dolphins: Five Questions with Revenge of the Birds

"Well I would always say that sacks are better than not having sacks, but on further review of the tape, you see Cam (Wake) around the quarterback a lot. You see a lot of knockdowns, you see a lot of hurries, you see him force the quarterback to step up and maybe get the quarterback to get rid of the ball a hair quicker than he would like. Those are all positive things. Certainly there is a lot made out of sacks, and the thing about a sack is sometimes you can knock the ball loose and get a takeaway at the same time. We're certainly not going to discourage him from getting sacks, but we're really pleased with the way he's playing the run. And mostly his effort has just been exceptional. If you watch the film the guy is playing hard, run or pass, and that's a good trait to have in this league." - Miami Dolphins Head Coach Joe Philbin on Whether He Thinks Sacks are Overrated if the Defense is Getting Good Pressure on the Quarterback, 9/26/12