Share All sharing options for: 2012 Miami Dolphins Caption This Week 3

It's Wednesday, which means it's time for our weekly Caption This post. Last week, we took a look at Reggie Bush reacting to a carry against the Oakland Raiders. This week, we shift our attention to rookie quarterback Ryan Tannehill. Unfortunately, we do not have a picture from this week worthy of our caption contest, so we will turn back to the Raiders game for inspiration.

In order to be a part of our Caption This contest, all you have to do is leave your best captions below in the comments section. You can also recognize the work of other by recommending their captions. All you have to do is click on the "Action" link at the end of their comment. It will then turn into "Rec" and "Flag" links. Click the rec link and you are done.

In next week's Caption This post, we will then recognize the person with the most "recs." 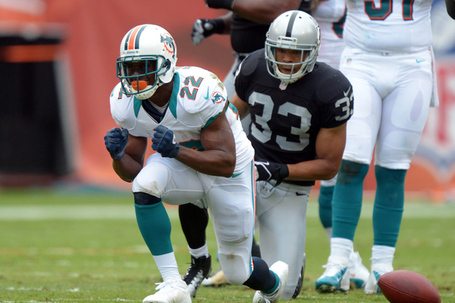 And our winning caption comes from chuckz0r:

Reggie Bush:
Taking $hits on the competition since 2011.

Now, it's time to get creative with the Ryan Tannehill picture. Have fun!