Ouch. Ahhhhhhhh. Nooooooo! That pretty much sums up my reactions to the Miami Dolphins' overtime loss to the New York Jets today. From a dominating first half, to a struggling second half, to a timeout erasing a field goal block, it was just an all around bad day to be a Dolphins fan.

There were positives that came out of this game, and we will discuss them during the week, but right now, it's time to deal with the pain and sorrow of losing a game Miami should never have lost.

To do this immediate reactions thread, I thought I would simply turn the thread over to the GIFs I posted throughout the game. They pretty much tell the story.

First came the tribute to NFL Films' Steve Sabol, who succumbed to brain cancer this week:

After that, the game was on, and the Dolphins opened the same way they did last week against the Oakland Raiders, driving down and scoring - this time off of a Richard Marshall interception off of Mark Sanchez.

The defense was doing its thing in the first half:

We also got a chance to see Tim Tebow teaching Mark Sanchez how to play quarterback: 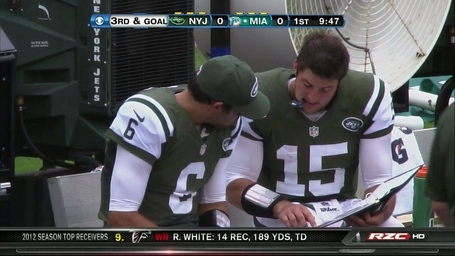 The ridiculous play from the Jets continued:

And then, the Dolphins pretty much played like this the rest of the game (yes, these are not Dolphins clips for the next two GIFs):

So, the Jets came back and tied the game at 20. Taking it into overtime, the Dolphins defense got the ball back for the offense, and Ryan Tannehill moved the team into field goal range. Dan Carpenter then came out and missed his second 47 yard field goal of the day, again hooking the ball to the left.

The Jets got the ball back, and then more ridiculousness happened. The Dolphins blocked the field goal!

But wait. Just before the snap:

So, the Jets got another chance at the field goal. This GIF pretty much expresses the result of that kick: