Jets at Dolphins: Where to Watch, How to Watch, and What to Watch

Share All sharing options for: Jets at Dolphins: Where to Watch, How to Watch, and What to Watch

The Miami Dolphins welcome in the AFC East Division rival New York Jets this afternoon. Any time the Dolphins play the hated Jets, it's a hard fought battle that can't be missed. Where can you watch the game? Of course, we have all the information you need. 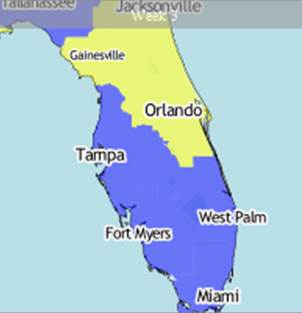 Obviously, CBS is going to be the place to watch this week in the markets, but, outside of the green areas in Florida, or every where else in the country, DirectTV's NFL Sunday Ticket package will air the game on channel 710.

1. Miami Dolphins Rushing Attack - The Dolphins are a pass first, West Coast Offense, but this game will come down to the running game. Can the Dolphins get Reggie Bush into space and continue the pace that has him with the second highest rushing yardage in the league? Will Daniel Thomas or Lamar Miller be able to spell Bush and keep up the pressure? The Dolphins will need to go toe-to-toe with the strength of the Jets defense and come out on top if they want to come away with a victory.

2. Brian Hartline vs. Darrelle Revis - The Jets will get their top cornerback this week, after Revis had to sit out last week with a concussion. Typically, Revis plays one-on-one with the opposing team's top wide receiver, which, after last week's 9-reception for 111-yards performance, is Hartline for the Dolphins. Will Hartline be able to find any space and give rookie quarterback Ryan Tannehill a chance to get into a rhythm? Or, will Revis shut down one of the two reliable targets the Dolphins have at wide receiver (Davone Bess being the other)?

3. Dolphins Front Seven - The Miami defensive line and linebackers have dominated in the running game through two games this year. Randy Starks is graded, according to Pro Football Focus, as the second best defensive tackle in the league, while next to him, Paul Soliai is eleventh. The Dolphins front seven will be tested this week, as former Miami head coach turned Jets offensive coordinator Tony Sparano is going to want to force the ball down the throat of the Dolphins. Sparano's ground-and-pound mentality failed in Miami. He's going to want to prove that it could have worked. Sparano is also going to want to break out his Tim Tebow offensive package against the Dolphins, trying to copy the Wildcat success he had with Miami in 2008. The Jets have not used Tebow to the extent everyone expected during the offseason, so look for the Jets to break out Tebow more against the Dolphins. Miami knows the Wildcat better than any team in the league; the Dolphins will just have to stay disciplined in their coverage and limit the success Tebow can have.

"That's you guys, how much you love [him]. Everybody loves him, but the same people go with the Kardashians. I don't know what they did, either. They're on [magazine] covers everywhere. I mean, honestly. I know they're really good people, do a lot of charity work. I just don't know how they got started." - Miami Head Wide Receiver Brian Hartline on New York Jets Backup Quarterback Tim Tebow, 9/19/12

"Again, I think when the game kicks off, it's going to more about just the simple fundamentals of football that typically, again, coaches spend a lot of time during the course of the week worrying about this, worrying about that, which we all do. I'm not saying I don't either and then, when you come in, usually Monday morning, the first thing Monday morning or Sunday night when you're on the plane, you look at the film and you're like, ‘My gosh, it was just the (defensive back) didn't stay deep enough over the top or we should have had this play, but we didn't, our right guard didn't step with the proper footwork.' My experience in the 155 games is it usually comes down to execution and fundamentals. I really believe, sometimes, the game plans are overrated. Now, I've said before, if you're designing runs and they've got two extra guys over there and you still run it over there, obviously that's not smart. Overall, there's a lot of good coaches in the league. There's a lot of good players and it usually just comes down to execution." - Miami Dolphins Head Coach Joe Philbin on the Gamesmanship Between Him and Jets Offensive Coordinator Tony Sparano, 9/21/12

"It starts with the players. I think they have a good group of players. They play extremely hard. They were well-coached obviously. I thought so, so much that I hired their coach. That was it. Those (three) things: (they have) good talent, they play hard and are well-coached. Any team is difficult to beat with that combination. Certainly, we had our hands full with them." - New York Jets Head Coach Rex Ryan on Why the Jets Have Struggle Playing Miami Lately, 9/19/12

"The emphasis is on our front five, the tight ends blocking, our receivers blocking down the field and me putting us in the right running play. If it's a check at the line, identifying it correctly when we're up on the ball and making sure we have the mike point. All of those things are critical and then it comes down to execution. Our one-on-one matchups, we have to win those and this is not an easy group to play against. They have playmakers all over the field from (Karlos) Dansby to (Paul) Soliai, (Koa) Misi is playing really well (and) Sean Smith is always tough to play against, so it's going to be a physical game and we need to play well." - New York Jets Quarterback Mark Sanchez on Running the Ball Against Miami's Stout Rush Defense, 9/19/12