Have you ever realized that when the Miami Dolphins are at their worst they destroy the opposition with a huge blowout statement win and totally redeem themselves?

Let me take you for a trip through time....

You see the pattern??? Yeah, we should have scored another field goal!

All in all, after a SWEET win I'm glad to be back with the newsletter formerly known as the Wildcat Weekly!!! For those of you who don't know, this post will be on a weekly basis but ONLY after a Dolphins victory. The new-and-improved Perfection Post will be a conglomeration of everything Miami, including a game recap, league news, games, Jets jokes, trivia and all sorts of excitement- I'm about to pop a blood vessel explaining it!!!

So without further ado, I present the first edition of the Perfection Post...

3rd down efficiency for Oakland- 1/12

3rd down conversions by Hartline- 3

Miami took full advantage of Oakland's short week and east coast road trip, putting together a very complete game. Reggie Bush was a man on a mission and Brian Hartline totally preyed on Oakland's corners and took over as role with a west coast receiver for a spectacular 9 reception, 111 yard performance. The defense gave up some big plays but made plays when it mattered most. 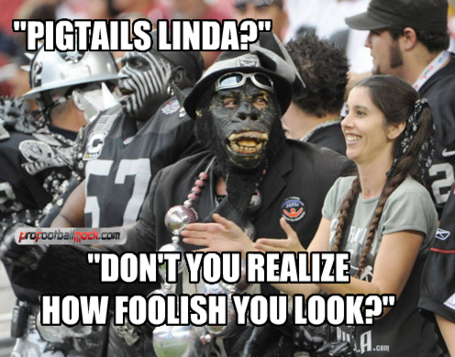 Don't you love when hard work pays off? I love seeing Reggie Bush thrive here not only because he is spectacular to watch but because he is also the hardest working player on this team. He has been labeled as a bust, as a "situational back", and a product of the New Orleans high powered offense. Well now Reggie is coming off a 1,000 yard season with currently the second most yards AND the longest rush (with this SICK 65-yard scamper) in the NFL. Miami will have a big decision to make this offseason whether to retain Bush or not; they do have two serviceable backs in Thomas and Miller, but Bush's departure would leave big shoes to fill. Regardless, I'm sure we are all happy to have Reggie on our team and his hard work is putting him right on pace for his goal to lead the league in rushing! 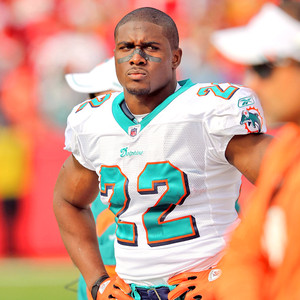 Hey Reggie, did you hear that Kim Kardashian is a Raiders fan?

This is exactly the type of the game that Miami needs to try to recreate on a weekly basis, especially in regards to Ryan Tannehill. Tannehill finished 18/30 for 200 yards, 2 total TD's and most importantly ZERO turnovers. Having our rookie be less pressured by controlling the run game will only help his progression and limit the opportunity for those rookie mistakes that seem to happen against better defenses. Big props to Brian Hartline for extending drives and making plays. Like I have said in the past, Brian Hartline isn't a fantastic option for your #1 receiver, but anytime you get a get a player with his passion, hands, and deceptive speed, it is NEVER a bad thing. I think Hartline could be a good fit in this system, even next year when Miami hopefully looks to make a jump to grab a legitimate big name receiver.

The Dolphins played night and day compared to their tough matchup Week 1 in Houston, however as good as they played this week there is still a lot to improve on. As dominant as our running game and run blocking has been, our pass rush and pass protection has been a bit concerning. We are not getting the pressure we need to bail out the weaknesses we have in our secondary.

I'm ecstatic that we won because otherwise I would have posted an entire article on the complete relapse of coverage of safety Chris Clemons in allowing a 64 yard screen pass to Mike Goodson for a touchdown. I was screaming at the TV as Clemons took the worst angle ever, and instead of containing Goodson, ran 10 yards behind him, right into the back of Sean Smith who was being blocked, and then stood there as Goodson burned past him. I won't go into too much detail because it angered me so much, but feel free to watch it for yourself. In fact, don't, because you will probably be as pissed as I was... but just know that these ‘instinctive' plays need to improve and the awareness of Clemons on that one play was a blinding concern that needs to be addressed. 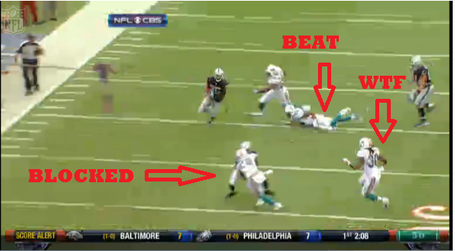 All in all though, Miami played a fantastic game and Sunday was a great day. With a decisive beatdown by Miami and a loss from New York AND New England.... you really can't complain and can't ask for much better than that!

*- Lamar Miller- The rookie started his first football game and answered with a 6.5 YPC and a TD. There is a bright future for this kid.

**- Joe Philbin- Have to give Joe some credit and a fair share of praise for his first NFL win as a head coach. Overall, our gameplan was a lot better

***- Ryan Tannehill- Ryan did exactly what he was supposed to developing a repertoire with Brian Hartline and not giving the ball up. His 13-yard scramble in the first quarter made me giggle in excitement, we haven't had that luxury in a QB, since well ever.

****- Brian Hartline- I don't know how Hartline does the things he does sometimes. He is not the strongest or fastest receiver in the NFL, but he has got some of the best hands and completely abused Oakland's corners all game long.

*****- Reggie Bush- People laughed when Bush proclaimed he wants to lead the league in rushing. Who's laughing now? Is Reggie Bush a top 10 back in football because he damn sure looks it.

1. There are currently the lowest number of 2-0 teams since what year?

2. There are currently the lowest number of 0-2 teams since what year?

3. Dan Marino threw his first TD pass to Joe Rose against what team? What position was Rose and what was his number? What is so unique about this?

4. The dolphins have 16-straight games not allowing a 100 yard rusher. How many NFL teams currently have a longer active consecutive streak?

5. How many Dolphins players have multiple runs of 65+ yards during the regular season? Name all Miami Running backs that apply.

The first person to answer ALL questions correct in the same post is this week’s winner!

The winner of the trivia will be tallied up and the total winner at season's end will win an autographed picture of shirtless Tim Tebow! Just kidding, it will be something cool though. Like the opposite of that.

"The Jets are the classiest, most respected team in the league. The Jets are led by the most deadly dual quarterback in the league. All they do is score touchdowns. Too bad they never receive the credit in the media they deserve" - Said no person ever. 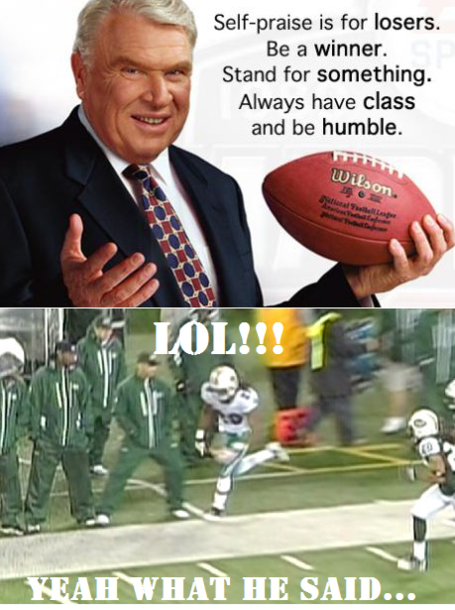 Honestly, I can make an entire other post for my hatred of the Jets but i'd probably end up smashing my computer in half and lighting my house on fire in the process. Regardless, this week is a big task and Miami can be in the division lead with a win. The absence of Revis would be a huge advantage for the Dolphins, but either way they need to keep up the rushing attack up and limit turnovers. All I want is a big win against the Jets! Who's with me? Whatever happens just know we always have Tebow to make fun of. 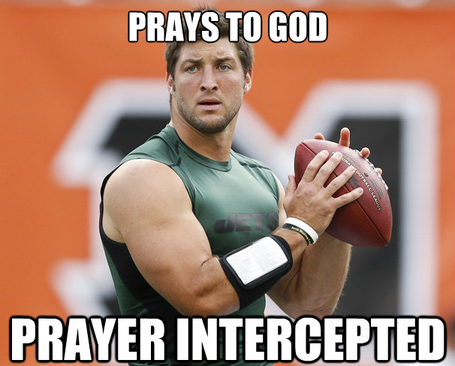 That's it for now boys and girls. It's been awhile but look forward to bigger and better Perfection Post's as the Fins stack up wins! Make sure to take a crack at trivia and comment below if you appreciate reading these things! It always helps me justify going through NFL stats and funny pictures while at work.

Most of all.. BEAT THE JETS!