Raiders at Dolphins: Where to Watch, How to Watch, and What to Watch

Share All sharing options for: Raiders at Dolphins: Where to Watch, How to Watch, and What to Watch

We are just a few hours away from the Miami Dolphins' home opener for 2012, as the team welcomes the Oakland Raiders to Sun Life Stadium. Where can you watch the game? Of course, we have all the information you need. 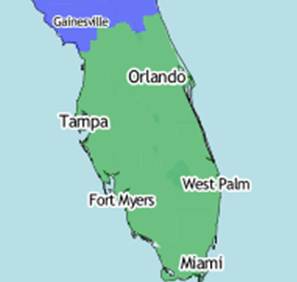 According to The506.com, the Dolphins game will be seen on CBS throughout all of California, along with southern Oregon, western Nevada, and southwestern Arizona. The game will also be seen in parts of Wyoming and Colorado. As for Florida, everywhere south of Gainesville and Jacksonville should be getting the game this week on their local CBS channel.

Obviously, CBS is going to be the place to watch this week in the markets, but, outside of the green areas in Florida, or every where else in the country, DirectTV's NFL Sunday Ticket package will air the game on channel 711.

1. Ryan Tannehill - The rookie has to bounce back after his three interception performance last week. Tannehill has to prevent balls from being tipped at the line of scrimmage, demonstrating growth from last week.

2. Wide Receivers - Last week, Legedu Naanee started the game opposite Davone Bess, then disappeared for most of the game (other than allowing one of Tannehill's interceptions). Brian Hartline and Anthony Armstrong both spent more time on the field than Naanee. Now this week, Armstrong is listed as doubtful. If the Dolphins are to have any success through the air, someone other than Bess has to step up.

3. Dolphins pass rush vs. Oakland's o-line - Last week, other than Randy Starks, the Dolphins pass rush seemed to be consistently one step behind Matt Schaub's delivery. They were getting to him, but not before he delivered the pass. This week, the pass rush has to get to Carson Palmer and help out a secondary who, despite playing decently last week, has to get assistance from somewhere.

"I'd like maybe a hair more. I mean we had two sacks and I think three or four knockdowns. I think four but I can't remember off the top of my head. I'd like a hair more; a little more disruption maybe. Make the quarterback move his feet more so even if you don't sack or don't hit him, you can disrupt the timing of the play. So, sure I think we could use a little bit more. Usually when you're an offensive coach, two sacks would be the most you would want. That's 32 in a season, and that would get you in the top maybe ten in league, roughly. So I think if you have two, that's adequate, but you'd love to get three. If you get 48 in the year, then you're going to be up in the top two or three in the league in sacks." - Miami Head Coach Joe Philbin on impressions of the defensive pass rush and the ability to get to opposing quarterbacks, 9/12/12

"They do a nice job of trying to control the ball. In the run game, their offensive line is getting better at moving people. They did a good job against Houston early in that game moving their defensive line around, which is a good challenge. They have a good mix of backs with Reggie [Bush] and everybody to bring in; of course he's very good. The young quarterback has improved. They do a good job of getting the ball out of his hands fast. They're still learning their pass game, but you can see the improvements as they're starting to get to know each other." - Oakland Defensive Coordinator Jason Tarver on Miami's offense and rookie quarterback Ryan Tannehill, 9/13/12

"Even the last three years with different staffs they've been in the top five, I believe, in rush defense. We do have our work cut out this week with the run game. We certainly believe in what we do in the run game and we have, like you mentioned, the first half was fine, but the second half...It's going to be a tough challenge; there's no doubt about it. Those guys they have up front, Cameron Wake, I cannot pronounce Paul's name, Soliai...very tough inside. They've always been very stout in the run game." - Oakland Offensive Coordinator Greg Knapp on Miami defending the run, 9/13/12

"I think one of the goals that we have to set is that we have to defend home field, defend our stadium at all costs no matter what. That's one of the things that needs to be one of our goals and on our agendas for the season. No matter what team comes in here, we have to defend it. This is our home field and we have the home crowd on our side, so we've got to feed off of that energy and just defend our turf at all costs." - Miami Running Back Reggie Bush on what needs to change to have better home field advantage, 9/13/12